All Articles Logic Pro
A Quick Guide To Customizing Logic Pro's Metronome Click
Joe Albano on Wed, September 11th 2 comments
Customising the click track in Logic is both easier and more useful than you might have realised. See and hear how it's done in this comprehensive guide from Joe Albano.

Most people pay little attention to Logic’s metronome options—the click is pretty much set up out of the box, so you can just choose a count-in length and start recording. And as long as you stick to basic Time Signatures (Meters) like 4/4, there’s really no need to fuss with it. But there are times when the default click setup may not be suitable, and for those cases Logic provides a number of customizations—it’s worth taking a few minutes to get to know what’s available.

As everyone  knows, there are two metronome-related buttons in the Control bar.

The 1234 button turns the count-in on and off, and lets you make several settings related to the count-in. The button with the metronome icon turns the click on or off, and provides access to the Metronome settings, the main topic for this article.

With a right-click on the 1234 count-in button, you can choose count-in length (in bars), or set the number of beats for just the count-in. 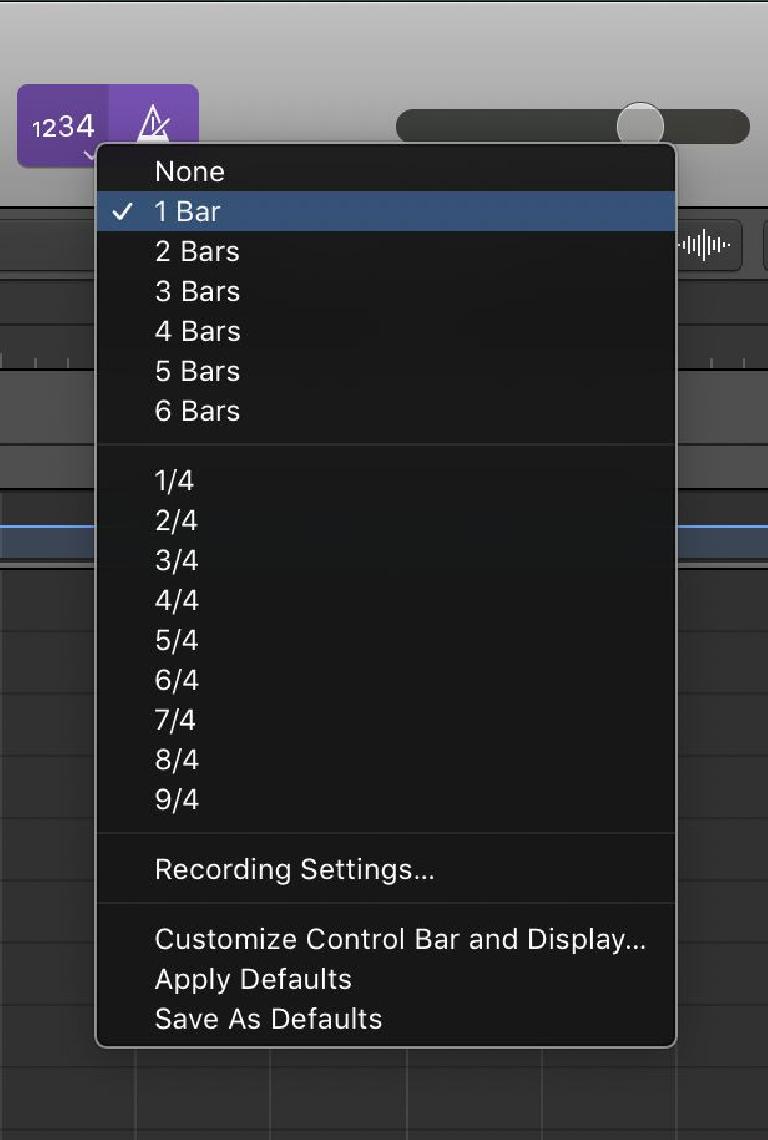 This last setting is intended to be used if you’re beginning a recording or a punch at a Meter change—instead of the count-in counting in the previous meter, you can set it to count a number of beats that matches the meter at the recording/punch point instead. This works fine, but it does override the number-of-bars count-in setting, and any accented clicks apparently will follow the accent pattern of the actual meter in the bar(s) the count-in is in, even if that accent pattern doesn’t match that of the upcoming changing meter at the punch point (if the meter at the punch point has more beats-per-bar than the previous count-in bars this can be mildly distracting if you’re not expecting it).

The Metronome button lets you turn the click on and off independently for Record and Playback, by toggling it when Logic is in either mode. Of course, you can also make those settings in the right-click popup menu. 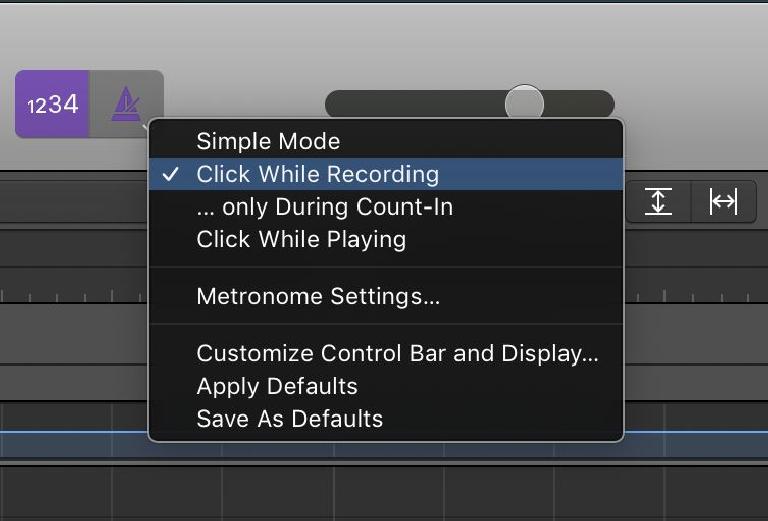 Here you can also set the click to sound only during the count-in, ceding to a musical drum part or rhythm part when recording begins. This is also where you can access the Metronome settings in the Project Settings, which allow you to customize the click itself.'¨ 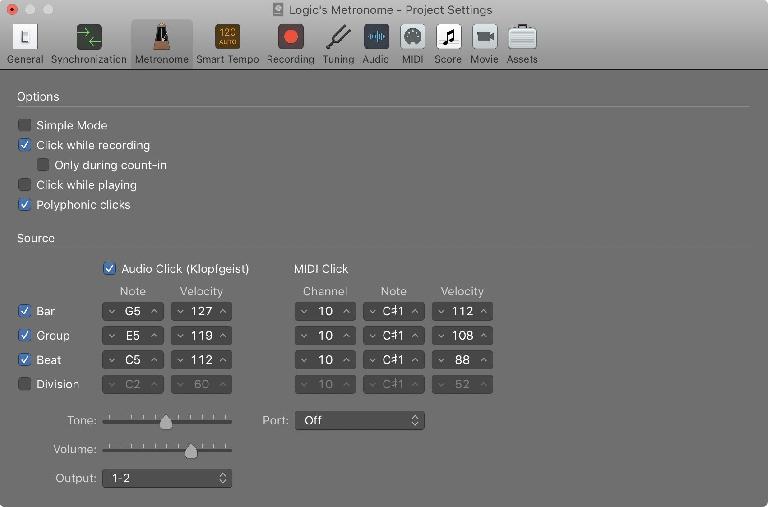 By default, Logic uses a built-in Instrument called the Klopfgeist (poltergeist or tapping ghost, in German), hidden away in a solo-safed high-numbered Instrument track.

You can set the overall volume and tone of this click sound (from more of a tick to a pop) at the bottom of this dialog, if you’re not happy with the default sound. At the very bottom, you can re-route the click from the default main stereo out to a different interface output, in case you wanted to send the click to, say, only a drummer’s headphone monitor mix.

You can also turn the internal click sound off and route the metronome to an external instrument—the MIDI click settings just above let you customize the sound when this is done.

But the main feature of this dialog is the ability to customize the click’s dynamics and accents via the Bar/Group/Beat settings. Here you can dial up both pitch and level independently for accented and un-accented clicks, and also determine the accent pattern. Note—Advanced Settings must be on in Logic’s Preferences to have the full set of controls here.

Naturally, Bar refers to the downbeat, and Beat refers to the other beats in each bear/measure. By default, logic sets Bar—the downbeat—to a slightly higher pitch and a slightly louder volume, which is normal for the downbeat in any metronome click. You can tweak this to provide a more distinctive or more heavily-accented downbeat, if desired.

With basic meters—like 4/4 or 3/4—these two settings are all that’s needed. But with more complex meters the third line—Group—comes into play, and this is where you can tweak your click for a preferred accent pattern. In the old days, Logic didn’t handle this well at all—even basic meters like 6/8 or 12/8 ended up as a series of identical clicks with only the downbeat accented, making it less useful as a guide for musicians, especially at slower tempos. But now you have full flexibility.

Let’s take 12/8 as an example—a common meter for blues arrangements. If you select this with the Group option off, you’ll get a series of 12 uniform clicks per bar, with only the downbeat accented. 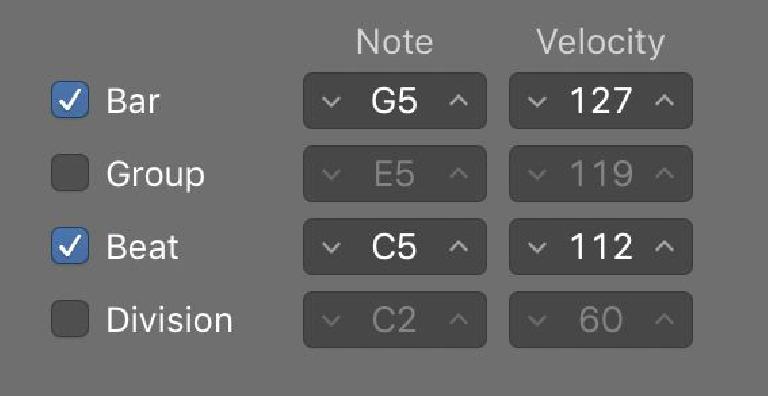 But if you turn Group on, Logic will automatically group those 12 beats into four groups of three, with a slightly less-pronounced accent every three beats, as per the Note and Velocity settings on the Group line. 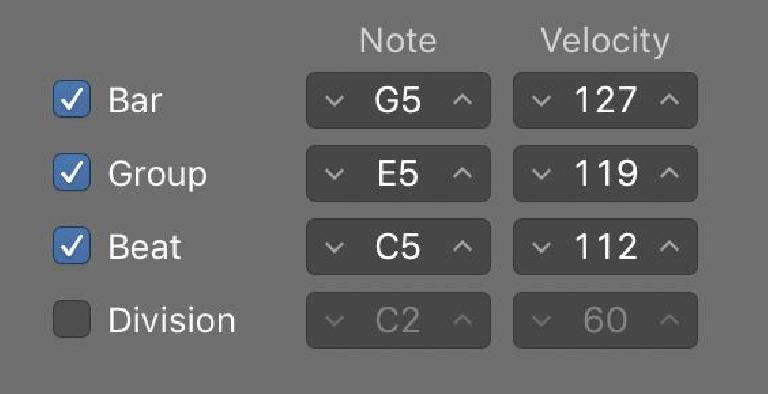 Again, you can choose to make any accent—Bar (downbeat) or Group—stronger or higher-pitched, as you prefer. You could even choose not to hear the individual beat clicks—especially at faster tempos—and instead hear only the Bar and Group clicks—just the accented clicks. So for a 12/8 meter that feels like a slow 4/4, you could play/record along with the accented clicks only (1,4,7,10 ), but still be able to quantize to 12/8 and see the 12/8 Time Signature in the Score display. 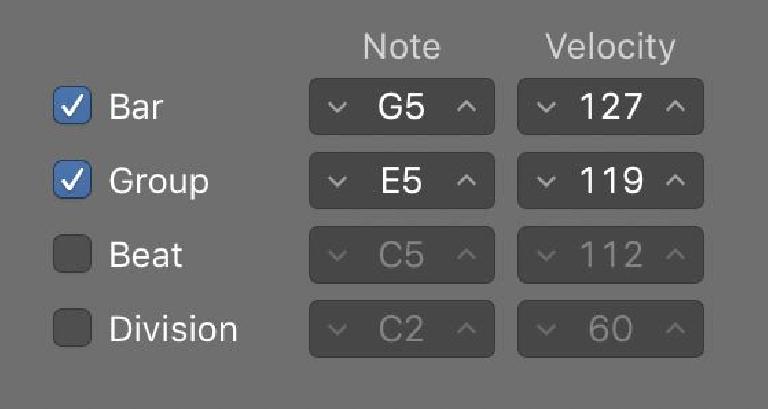 But what if, instead of the feel of a slow 1,2,3,4 with three notes per accent, you wanted a feel of three (three groups of four clicks as opposed to the more usual four groups of three)? Well in that case, Logic lets you devise your own custom grouping, to determine where those internal Group accents will fall within the bar.

So if I wanted my 12/8 bars to have a slow three feel—three groups of four clicks—I’d click on the Time Signature in the Control bar and select “Custom”. 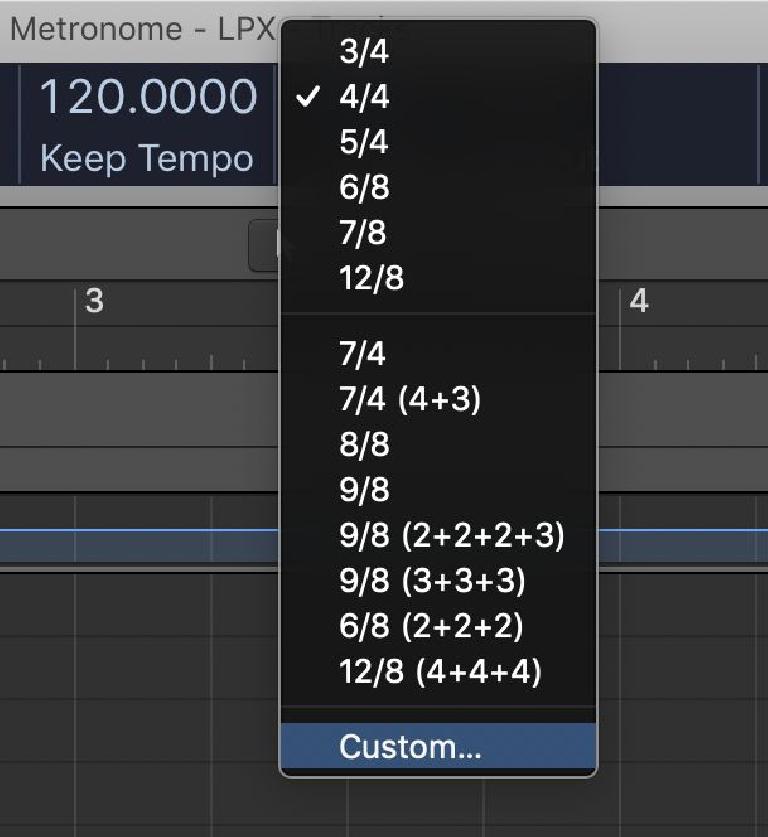 To create a custom grouping, you can enter the number of clicks per section, with or without + signs: so, for this example I could enter either 444 or 4+4+4, and the result would be accented clicks on the 1, 5, and 9—three groups of four clicks each. 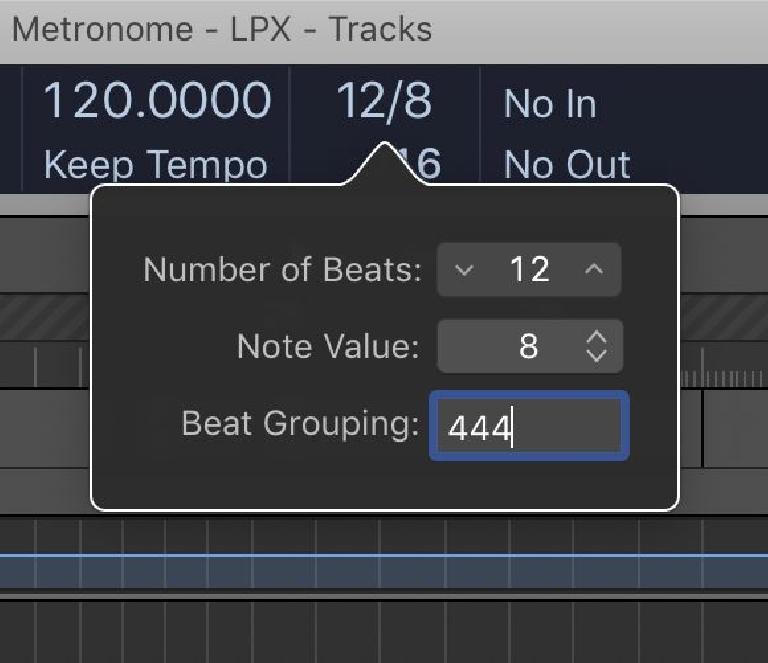 If I went back to the plain 12/8 meter, I’d get the default four groups of three.

Another classic example might be the well-known 7/4 meter of Pink Floyd’s Money. Instead of bars of 7 even clicks, you could create a custom grouping of 4+3, which would make sense with the drum beat played in that song.

If you use the Score display, it’s important to realize that while different custom groupings don’t show in the main window—7/4 and 7/4 (4+3) both show as 7/4—compound meters do show in the score, so if you’d recorded to that customized 7/4, with the 4+3 accents, that will display as a compound meter in the score: 4+3/4;

You’d want to switch the main Time Signature back to simple 7/4 when you’re done recording to see a basic 7/4 time signature in the score.

There’s one more line in the Metronome Settings dialog, that I’ve skipped over so far—Division. 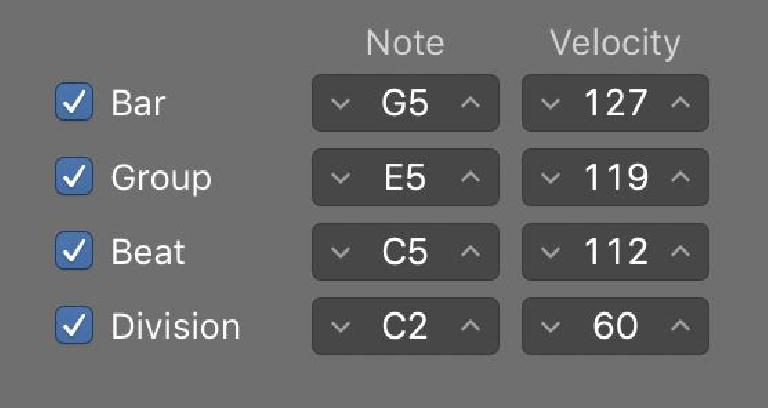 It’s off by default, but if you enable it, Logic will also provide clicks at the division value—that’s the same division setting you see in the Control bar Tempo section. The default is 16th notes, and with Division enabled in the Metronome settings dialog, you’l not only get clicks on the beats (accented and un-accented), but also on these subdivisions as well.

As you can hear, Logic’s default setting pitches these faster clicks way down, at a much lower volume. 16th notes may be a little too quick, but 1/8th notes could be useful, especially at a very slow tempo, where the players might benefit from having quiet, subtle extra clicks to help them stay in time between slower, more widely-spaced beats. 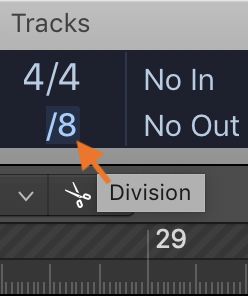 So there’s a lot of flexibility in Logic’s metronome. The defaults do a perfectly good job of providing a click for typical sessions, but when a little more customization is needed, it’s nice to know that it is possible to dial up exactly the click you want—or need.

Learn everything you need to know about making music with Logic Pro X: https://ask.audio/academy?nleloc=category/audio/application/logic