All Articles Recording & Production
Add Character To Your Music Productions With This Simple Mono To Stereo Tip
Rich Tozzoli on Fri, February 24th 0 comments
Language
Playing with stereo effects can really help to add depth and space to your tracks. Here's an example of applying the technique to a guitar part.

Sometimes, when recording guitar into a software amp, the sound just doesn’t have enough depth. Here’s a quick and easy technique to add something extra to the track using a mono to stereo EP-34 echoplex style delay plugin. From there we’ll add a touch of stereo room sound for some additional character. All of this in just 5 minutes of work!

In this example, you’ve got a single guitar part recorded over a bass and drum track. This is your typical mono part recorded through a software guitar amp dry, with no effects. The guitar is panned around 10 o’clock.

One way to add some interest to the part is to insert a mono to stereo delay plugin. I happen to like using the Universal Audio EP-34 Tape Echo for this, because you can pan the overall effect within the plugin itself.

Note that you could also assign the plugin to a stereo Aux track and use a bus send, but sometimes I like to put the effect directly on the guitar track itself and drive the input stage directly. So once you’ve got the stereo plugin assigned, the panners will default to hard left and right.

What I typically do next is take the left side of the panner and move it up towards the 10 o’clock position, so that there’s a slight tightening of the image away from full stereo.

What I like so much about the EP-34 echoplex style plugin for this effect is the ability to pan the echo to one side and creatively use the EQ. What I’ll typically do is set a short delay time (about 80ms) with minimal repeats so as not to cloud the tightness of the effect. Using the Wet/Dry set to down (dry), you can drive the input stage and amount of overall effect using the recording level. Next, and most importantly, you can pan the echo effect to either side.

By panning the effect fully right and keeping the left side of the panner set around 10’oclock, you’ve created a nice sense of space.

Another reason I like to use the EP-34 for this type of effect is that you can play with the Treble and Bass knobs to affect the overall tone. I tend to push the Bass up to thicken parts and cut the Treble, but that depends on the guitar used and the overall production approach. The good thing about using a single guitar with this type of approach is that there is plenty of sonic space to let the echo effect shine through, and you’ve now widened your stereo image away from that boring mono sound.

If you want to add even more depth to the sound, you can put a stereo reverb plugin after the delay. Note that once again you can choose to do this using an Aux channel and a bus, but sometimes it's nice to just put it right on the track.

I happen to turn to Audio Ease’s Altiverb for this quite a bit, because it has real studio impulse responses. One of my favorite IRs is Clubhouse studios in Rhinebeck, NY. I happen to actually record there quite a bit, but when I can’t, I can call it up in Altiverb. It’s got a great clean, bright room for guitars.

When adding a reverb directly to the track, you’re going to want to play with the Wet/Dry mix so as not to swim your guitar fully in the overall effect. 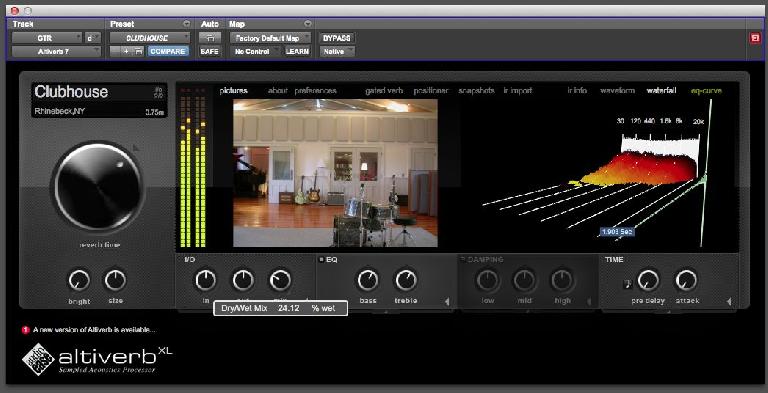 Remember that the more room sound you add, the further ‘back’ your guitar will sound in the mix, so add the Wet/Dry to taste. Also like the EP-34, I use the built in bass and treble to change the overall tone of the guitar in the room.

With just a few minutes of effort using a mono to stereo delay and reverb, you can take a boring dry guitar part and make it much more interesting!

Dream It. Do It.
Do you want to learn 10 Common Panning Mistakes?
Yes, I want to learn!
No Thanks, I just want to read the article.
Feedback
How are we doing?
We'd love your thoughts, feedback and questions regarding our new site. All feedback is appreciated!
We do not respond to this form! If you need support, please visit our support page.
Thank you for your input!
Your message has been successfully sent
Course Advisor
Don't Know Where To Start?
Ask A Course Advisor