All Articles Logic Pro
Adding Tube Warmth in Logic Pro
Darren Burgos on Wed, February 8th 3 comments
Language
It would be great if Logic Pro came bundled with a Tube Warmth effect plug-in... Well, it does. Darren Burgos demonstrates how subtle use of Logic's Clip Distortion effect can add warmth to any track.

There are no Tube Warmth titled effects in Logic Pro specifically. But that doesnâ€™t mean there arenâ€™t anyâ€¦ the built in Clip Distortion plug-in and the Overdrive can be used in a subtle way to add warmth and depth to your tracks. In this lesson, Iâ€™ll be adding a â€œtubeâ€ warmth sound to a bass, but any instrument or vocal can benefit from this. Since there is technically no volume ceiling in the digital world, itâ€™s safe to say that any distortion type effect is actually a model of something from the physical world. Distortion happens when tubes and transistors are driven to their capacity; needless to say, those donâ€™t exist inside software!

Start with the Clip Distortion (weâ€™ll use its default preset). Go straight for the LP Filter and push it all the way up to 20,000Hz. The Low Pass Filter is a â€œblanketâ€ Filter affecting the dry and effected signal. By pushing it all the way up, your original sound will stay intact. 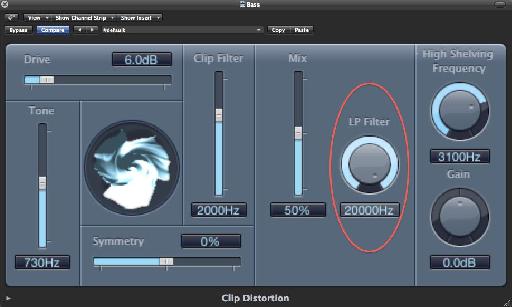 The Tone slider is actually a high pass filter (The Lows are cut off as you push the slider up). To add a subtle analog feel to bass, youâ€™ll want to keep this slider mostly down. Higher values (although cool sounding, too) will focus the distortion on the highs. 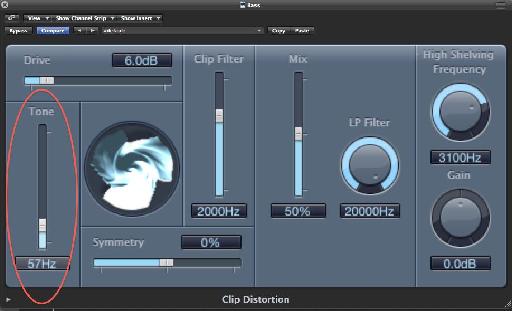 Now push the Mix setting all the up to 100%. This will allow you to hear purely what the Clip Distortion is doing to the sound. Bring the Mix slider WAY down to mix in the original sound. I have mine normally set very low. Iâ€™m just looking to add a slight fuzziness under the lows. 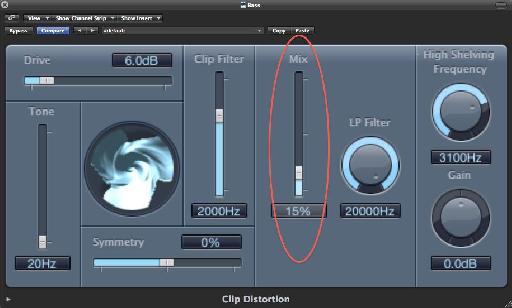 Clip Distortion is considered a â€œNonlinear Distortionâ€ (as are actual Tubes). The Drive and the Symmetry settings are strictly to taste. The Drive setting allows you to raise the volume of the incoming signal to drive the virtual tube/circuitry. The Symmetry slider selects how â€œtwistedâ€ the sound becomes passing through the circuitry. (This is shown graphically in the Clip Circuit display). 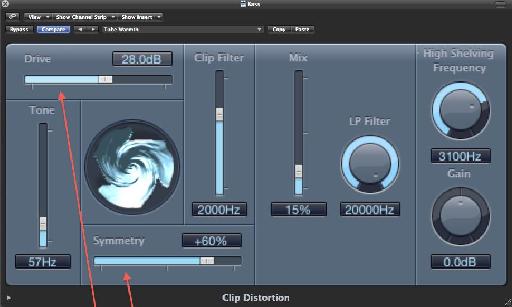 The Clip Filter is a low pass filter so you can strip off some of the Grunge thatâ€™s created. This is also â€œto tasteâ€; I have mine set to 1600Hz. 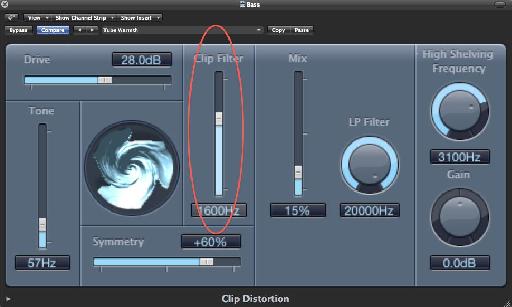 The â€œHigh Shelvingâ€ section has both Frequency and Gain knobs. Itâ€™s basically exactly like it sounds. Think of it as an EQ like Logicâ€™s built in Channel EQ: you can create a flat surface that can be raised or lowered in both the lows and the highs. This is only the highs. The only reason I would use itâ€"if adding tube warmth to a bassâ€"would be if the bass needed a bit of shimmer. Even very deep sounds will have higher frequencies/harmonics in them that might need to be brought out some way.

Hereâ€™s a sample of my original bass without the Clip Distortion:

Hereâ€™s a sample of of my bass part running through the Clip Distortion:

Next, letâ€™s put on the Overdrive effect underneath the Clip Distortion. I bet you're thinking at this point, â€œOK, heâ€™s gonna distort the heck out of this thing.â€ If it sounded like the name of the plug-in, youâ€™d definitely expect just that. Choose â€œCreamy Tubeâ€ from the preset menu and adjust the Output.This is a great preset and really brings out the sound. 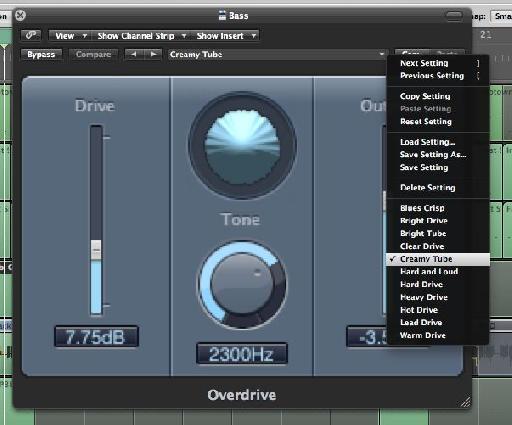 Hereâ€™s a sample of of my bass part running through the Clip Distortion and the Overdrive with the Creamy Tube preset:

The Overdrive actually put some highs in there?! The bass sound went from hiding out in the background, to being much more confident and warmer. Enjoy!

Darren Burgos
Darren started making music on computers when he was a teenager in 1987. His first computer was an Amiga, and when he realized the power of computer-based production, his addiction for making electronic music began. Darren switched to Mac in 1994 and started using Logic Pro. He's been involved in many music projects over the years including Psychoid. For two years Darren travelled with Apple showing Logic Pro to visitors of Macworld, NAMM, Remix Hotel and NAB. Currently, he teaches a class in L.A. on electronic music production using Logic for Logic Pro Help. Darren also runs two small businesses on Mixing, Mastering and Logic Pro training and support.
Related Videos
Comments (3)

Dream It. Do It.
Do you want to learn Logic TNT 3 Tips and Tricks: Reloaded?
Yes, I want to learn!
No Thanks, I just want to read the article.
Feedback
How are we doing?
We'd love your thoughts, feedback and questions regarding our new site. All feedback is appreciated!
We do not respond to this form! If you need support, please visit our support page.
Thank you for your input!
Your message has been successfully sent
Course Advisor
Don't Know Where To Start?
Ask A Course Advisor