All Articles News
Amped Studio Release 7 New Devices - Bitcrusher, Compressor, Distortion And More
Hollin Jones on Thu, March 7th 0 comments
A selection of bundled and premium effects can be found in the latest update to Amped Studio, the advanced online DAW and music-making solution. Here's what they do. 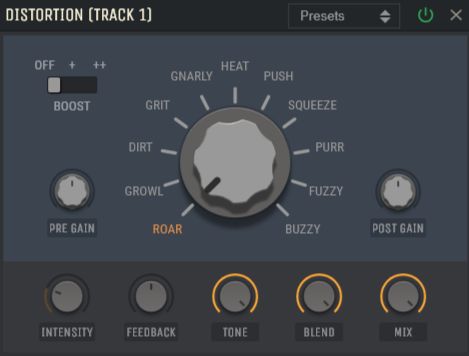 Distortion and BitCrusher are two great new effects for sound mangling and coloration. BitCrusher is a free effect and is available for all users. Distortion is a Premium effect offering plenty of character to anything you throw it on! With eleven different distortion modes it can do anything from subtle saturation to aggressive destruction.

Four new Premium dynamic effects Compressor, Limiter, Gate and Expander are great for any mixing situation. The new video tutorial page has separate videos explaining how use and understand each effect. Compressor Mini, offers a one knob control to glue or squash wherever needed!

The Amped Studio website was also updated with a new studio manual, improved navigation and videos to help you get started. Amped Studio is free and costs only $4.99 a month ($49.99 a year) to get access to the premium devices, sound library and expanded audio options. Other Amped Studio features include Pitch to Midi technology, WAM support (cloud based VSTs) and an array of instruments and effects to help you develop your music production skills. For more information or to give Amped Studio a try go to https://ampedstudio.com and discover your sound.