By being billed as a Living Organism of Drive, Dynamics, and Tone, Instinct Synergy certainly delivers on all counts. The effect excels when used for dynamics processing, tone shaping, or adding gritty distortion. Indeed, it can be used in a sound design capacity by bringing underlying transients to the fore or building up weaker sounds. Saying that, Instinct Synergy works equally well when used as a mixing tool. The results usually vary from smooth saturation to extremely distorted and noisy breathing sounds, with wide dynamics and a very rich frequency spectrum.

Thanks to Antelope Audio’s acclaimed Discrete 4 Synergy Core, Discrete 8 Synergy Core, Orion Studio Synergy Core, and Zen Tour Synergy Core audio interfaces’ inbuilt Synergy Core effects processing platform, owners of those devices can load Instinct Synergy and monitor their signal with imperceptible latency without adding any CPU (Central Processing Unit) load to the host computer. Clearly, applying the effect in real-time to solo instruments or instrument groups means users of any of those audio interfaces are able to find creative solutions faster and commit to their sound earlier in the process. Bear in mind, however, that the instances of Instinct Synergy that can be loaded into a project is device-dependent.

Ignoring Instinct’s time-saving transportation to its Instinct Synergy renamed resting place, the concept behind both the original plug-in and the Synergy Core-compatible effect remains unchanged: an ability to control tone, drive, and drive circuit parameters dynamically, based on a MOD (modulation) signal that is created by the shaping or sculpting of the intensity envelope of the SCULPT section input. It is this feature that pumps the musical heart of Instinct Synergy, making it sound so alive and kicking. Cutting to the chase, applying that MOD signal to the drive circuit’s GAIN parameter produces a drive/transient shaper effect. Elsewhere, the shaped MOD signal can also alter other parameters, such as BIAS, post FILTER cut-off FREQ (frequency), plus transistor circuit shapers and tube circuit internal voltages (based on high-quality transistor and tube models that can be tweaked, interchanged, and modulated in depth).

Digging deeper, other notable features include a versatile signal flow (with one or two drive circuits in series providing a lot of freedom regarding which modules are active or inactive to create different signal flow choices with different character and a wide palette of resulting sounds), VA (Virtual Analog) modeled (high-quality zero delay feedback drive and tone) resonant filters (with internal saturation and self- oscillation), an ability to MORPH across circuit models and circuit model parameters (that can be smoothly tweaked), a high-quality (transparent) BOOST filter, and high-quality (zero-latency transparent) resampling.

Antelope Audio’s Instinct Synergy comes complete with many preprogrammed presets, varying from smooth warm dynamics to more creative, wild, and noisy tones. These can be a good starting point for both mixing and sound design.

Clearly, Instinct Synergy creatively combines all attributes of Inertia Sound Systems’ original Instinct plug-in with welcomed acceleration afforded by the built-in Synergy Core processing engine of studio- and stage-ready Antelope Audio interfaces for monitoring without distracting delay and performing live on stage without adding CPU load to the host computer. Where will its users’ instinct take them, then? To wherever they creatively wish to travel... 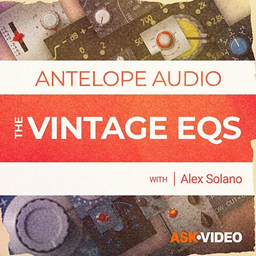 Dream It. Do It.
Do you want to learn The Vintage EQs?
Yes, I want to learn!
No Thanks, I just want to read the article.
Feedback
How are we doing?
We'd love your thoughts, feedback and questions regarding our new site. All feedback is appreciated!
We do not respond to this form! If you need support, please visit our support page.
Thank you for your input!
Your message has been successfully sent
Course Advisor
Don't Know Where To Start?
Ask A Course Advisor