Get ready to add a whole new level of color and depth to your music. Pigments is a hugely versatile software synth that combines virtual analog, wavetable, sampling, and granular synthesis all in one instrument. It makes advanced modulations seem like child’s play, so you can bring your sounds to life with animations, sequences, macros, and bring it all together with incredible effects. Pigments hits the perfect balance of sounding incredible and having hugely powerful features, while at the same time being intuitive and easy to use.

Just one year on from releasing Pigments, a powerful twin engine, modulatable software synth, Arturia have given the instrument a major update. Pigments version 2 introduces impressive new features such as sample playback, granular synthesis, a revamped sequencer, a new filter, delay effect, and new presets to show off all these new abilities.

New Sample Engine
Explore hundreds of samples, import your own, load them into one of 6 different slots with 6 playback modes. Loop, edit, and bring them to life with Pigments’ modulation abilities.

New Granular Mode
Add another level to your sound design by transforming samples into granular synth patches at the touch of a button, adjust density, envelope, size, and exciting randomization parameters.

New Sequencer
The in-built sequencer now lets you apply randomness in a non-destructive way, letting you always return back to where you started, perfect for live performance and improvisation.

Refined Features
What would an update be without little improvements here and there? New interface, MPE capability, new undo/redo functionality and enhanced modulation bar await you.

New Presets
To show off the new features, our team of heroic sound designers have created hundreds of breathtaking new sounds for you to explore and use in your tracks. 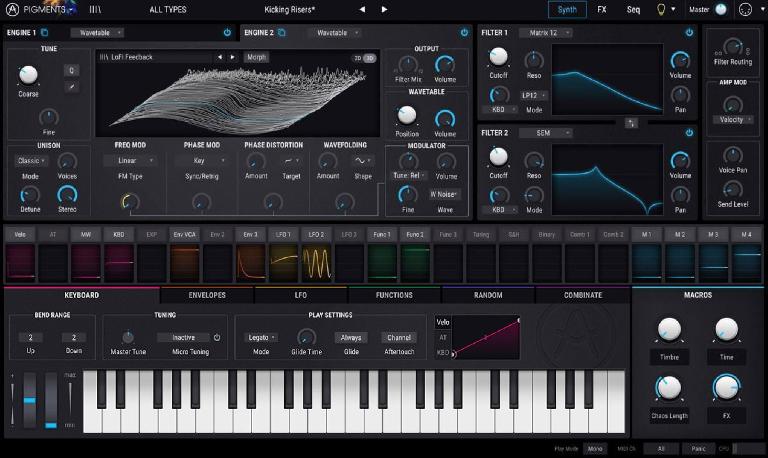 Pigments version 2 is available as a free update to all Pigments owners. To update, they simply need to run the update in the Arturia Software Center.
Exclusive deals will be available for existing Arturia customers and V Collection owners.

Dream It. Do It.
Do you want to learn Pigments - The Video Manual?
Yes, I want to learn!
No Thanks, I just want to read the article.
Feedback
How are we doing?
We'd love your thoughts, feedback and questions regarding our new site. All feedback is appreciated!
We do not respond to this form! If you need support, please visit our support page.
Thank you for your input!
Your message has been successfully sent
Course Advisor
Don't Know Where To Start?
Ask A Course Advisor