Originally released in 2016 as part of V Collection 5, Synclavier V gave a whole new generation of musicians access to the ground breaking sound and features of the revolutionary late-70s digital synth. Developed in partnership with the original instrument’s inventor, Cameron Jones, Synclavier V went above and beyond the capabilities of the hardware produced between the late 70s and early 90s.

However, New England Digital also produced many optional add-ons for the Synclavier, such as a sample playback module and a resynthesis engine, that were not emulated in Arturia’s release of Synclavier V 2. Today, that changes.

With the release of Synclavier V 2, alongside many other workflow enhancements and improvements, Arturia and Cameron Jones are proud to announce that Synclavier now includes sampling capabilities and an exciting resynthesis engine for musicians, producers, and sound designers to explore. Load in samples by simply dragging and dropping, and play them back with vintage digital grain and pitch scaling. Samples of up to 30 seconds can be imported and processed using Synclavier V’s effects and routing, perfect for creating retro sampled keys and pitched-down pads.

Once a sample is loaded, with the touch of a button Synclavier V can now analyze the spectral content of the sample and - using a mixture of wavetable and FM synthesis - mimic the sound using resynthesis. Key points in the sample can be identified and manipulated manually to refine the synth patch, and then every parameter can be controlled using Synclavier V’s hugely powerful synth engine. Create entire instruments from just one sample!

Arturia’s sound design team have been busy creating hundreds of new presets for you to enjoy in Synclavier V, showing off some of the key new features to get you inspired. On top of that, the updated version includes a selection of the original New England Digital sample library files for that authentic touch.

Following feature requests and feedback from Synclavier V owners, Arturia’s software developers have also integrated many subtle improvements to the interface and operation of the instrument. These include:

New users can explore Synclavier V in many ways.

A free trial is available at the official Arturia website: https://www.arturia.com/synclavier-v/resources 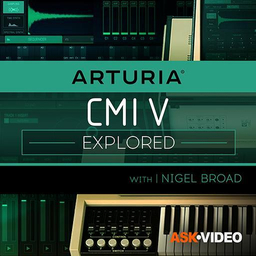 Dream It. Do It.
Do you want to learn CMI V Explored?
Yes, I want to learn!
No Thanks, I just want to read the article.
Feedback
How are we doing?
We'd love your thoughts, feedback and questions regarding our new site. All feedback is appreciated!
We do not respond to this form! If you need support, please visit our support page.
Thank you for your input!
Your message has been successfully sent
Course Advisor
Don't Know Where To Start?
Ask A Course Advisor