All Articles Cubase
Automation Workflow In Cubase: Tips And Tricks
Hollin Jones on Tue, June 20th 0 comments
Automation is one of the most powerful tools in any modern DAW and something that was once only found in pro studios. Here are some top tips to help you get the most out of it in Cubase. 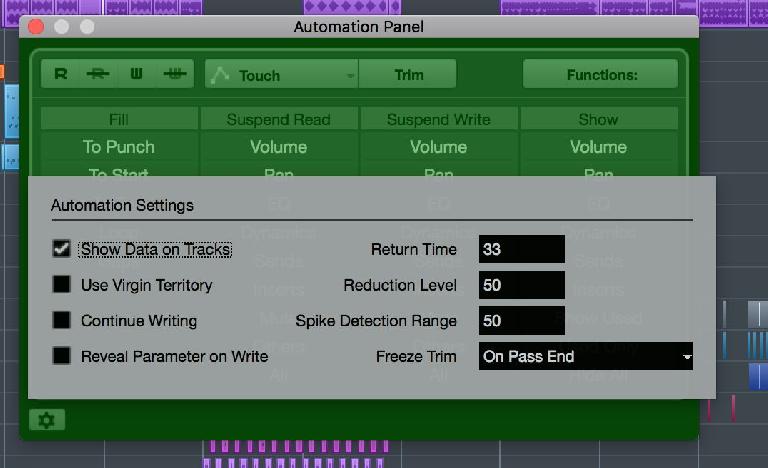 A few versions back, Steinberg introduced an Automation Panel for Cubase to bring together the burgeoning set of tools into a single location. You can invoke it by pressing F6, selecting it from the Project menu or clicking on the toolbar automation section. Click on the gear icon on this window to reveal the global automation settings. Here you can set up various behaviours like whether Cubase should keep writing data after control release, whether parameters are displayed on write, the return time and reduction level of automation data and so on. Depending on how you like to work, at least some of these are bound to be useful to know about. 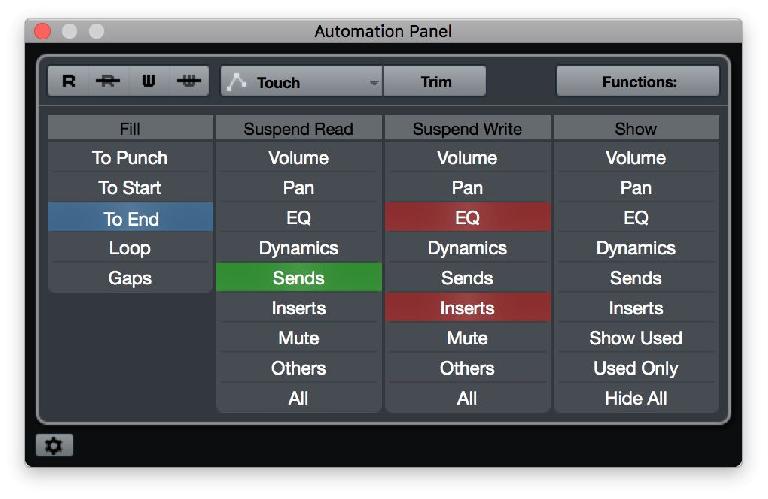 There’s another reason the Automation Panel is incredibly useful: it lets you perform specific actions across whole projects or types of automation parameter. The column on the left is Fill, allowing you to instantly populate specified areas with the current value rather than having to attempt it by hand. Suspend Read and Write can be done across whole projects for specific or “all” automatable parameters, which is a great timesaver for when there are many individual automation tracks active. Finally, you can show or hide all automation track types with a click, or show only used tracks. These are invaluable for larger projects.

3. Use the toolbar shortcuts

When you select automation data in a track in the Project window, if the info line along the top edge is visible it will show some parameters relating to that data. You can manually enter a start time and more usefully, use the Value field to quickly move all the selected automation points up or down by a specific value. The Terminator option is also good to know about because if this is set to No, your final value will continue to be present after the last point, affecting the rest of the project. If you select Yes, the end point stops the automation continuing until any more points are placed on the track further down the timeline.

All VST plug-ins are required by the SDK to have the option of reporting all their parameters as simple buttons or sliders. For any plug-in, if you go to the arrow at the top right and click Switch To Generic View, you will see the parameters – sometimes well over a hundred – shown as a simple list, with toggle switches and sliders. These can be automated in the same way as normal, by activating Write and moving them. The end result is the same, but if you have a large, complex instrument, it can be a quick way to identify the parameter you want to automate. 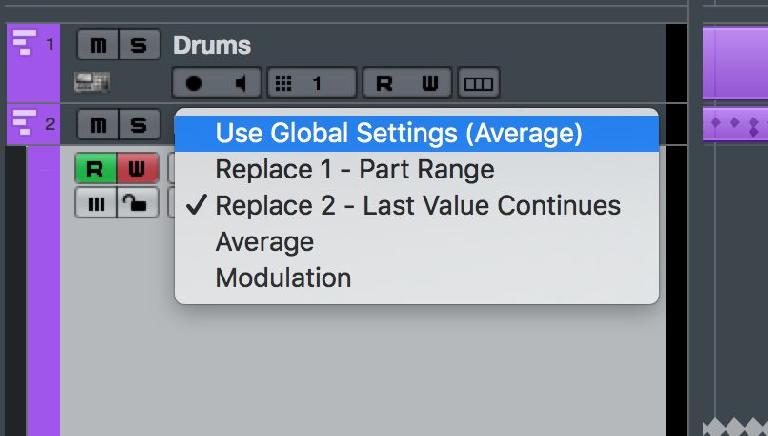 The left hand side of an automation lane houses some important quick controls for working with a track’s automation. You can mute automation with the three-lined button, or lock the data to prevent accidental changes. The Part Merge Mode menu lets you choose how data gets merged. This pop-up menu is only available for controllers that can be recorded both for a part and a track. The settings that you make for a controller are applied to all MIDI tracks that use this controller. 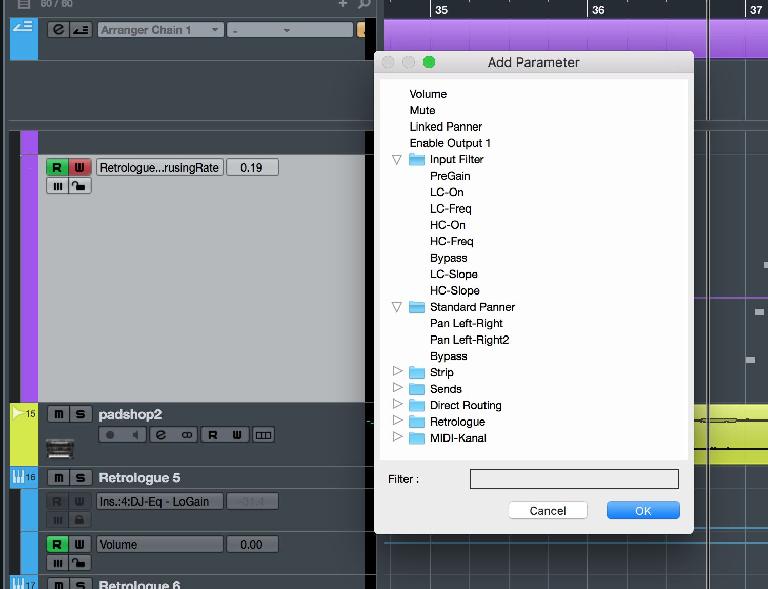 Sometimes when a plug-in has lots of controls, automating by moving a parameter on its interface can be an imprecise way of working. In the track control area of an automation lane, click on the dropdown menu to see what major controls can be selected instantly. These will usually be the most important ones like mixer parameters, level and so on. However if you select the More option you will get a window where you can find literally any parameter that can be automated for that device. These are often grouped by folder to help legibility, and there’s also a Filter field where you can quicly search for a parameter. Then simply draw the automation in by hand into the track.

7. Use shape tools to draw data 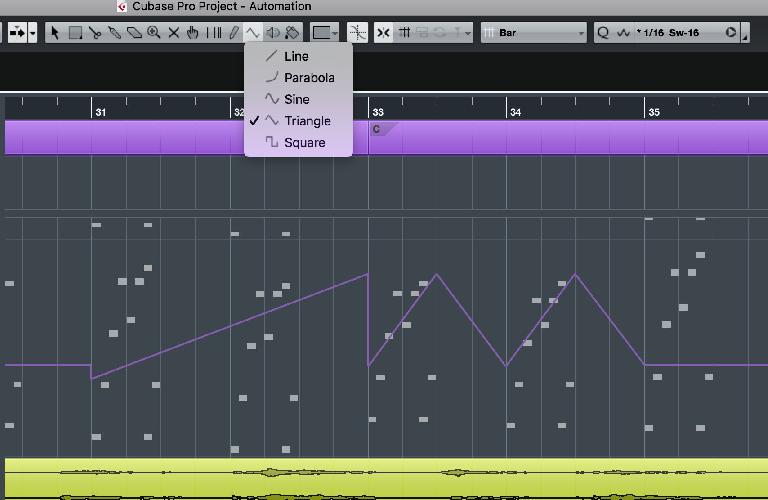 You can use the Pen tool to add automation points to any track, but if you click and hold on the Line tool you will see that you are able to switch to other shape tools including parabola, sine, triangle and square. These provide a quick way to draw in things like filter modulation, ramps, and other regular movements between values such as quick panning. By dragging left to right you extend the shapes over time, and by dragging up or down you increase or decrease the extremes of values.

8. Use the Scale box 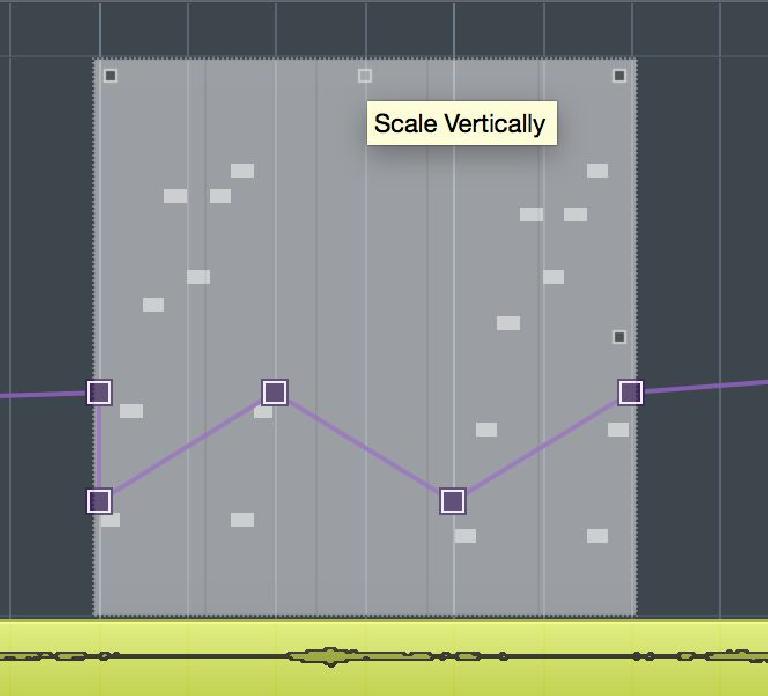 When you have automation points on a track, you probably know that you can select them to perform various actions. One feature that has been added to Cubase relatively recently is a Scale box. You can pick up the tiny black dots around the edges of this shaded white box and drag them to morph the shape of your automation curve in different ways. This is much more flexible than just moving it – it actually affects the relationship between the different points rather than changing them all by the same amount. 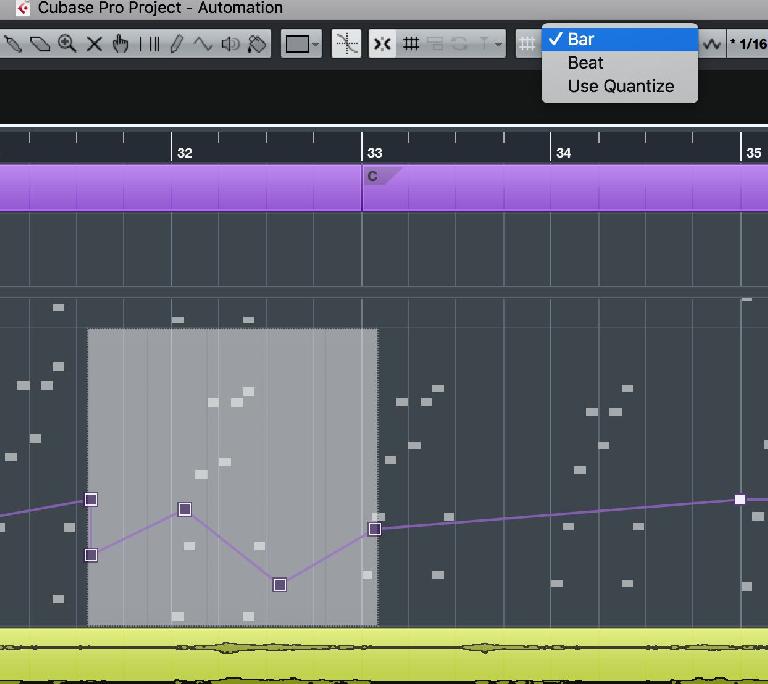 When moving automation data on the timeline (or any other kind of data for that matter), Cubase will snap it to whatever settings you are using in the Snap section – assuming of course you have snapping switched on. If you hold down the command (Mac) or control (PC) key while dragging, you temporarily bypass the snap behaviour and can drag the data or clip with complete freedom. As soon as you release the key the clip stops where you left it, but snapping becomes active again for all future actions.

Learn more Cubase tips and tricks in these video courses in the AskAudio Academy.
Related