All Articles Logic Pro
Bending Sounds in Logic Pro
Darren Burgos on Mon, November 12th 3 comments
Language
There's a bunch of cool EDM sounds you can make using Logic's ES2. In this excellent tutorial, Darren Burgos shows how to get that pitch bend riser-style EDM lead sound. A MUST read!

Most people go straight to the pitch bend wheel when they want to bend a sound. We'll be using pitch bend in this article, but I want to show a couple of other methods for making flexible sounds. While we'll be using the ES2 synthesizer, there are dozens of other instruments which share the same parameters. We'll first look at the most obvious method: Pitch Bend. Then we'll look at Glide/Portamento, and finally, Glide/Portamento with Legato. If you follow along with the lesson, you'll end up with a pitch bent riser, and an Electro House bendable lead sound.

Let's make a cool sounding riser in Logic's ES2. Add a new software instrument track if you haven't already, and choose the ES2. By default ES2 is set to bend notes up or down by two notes, but the fun begins when you change the bend range to extreme values. ES2 allows you to bend notes by as much as 3 octaves in both directions for a total bend range of 6 octaves. Under the Synth Pads section of ES2's presets choose 'Sunrise on Titan,' then set the Bend Range to 36 for up, and link for down. 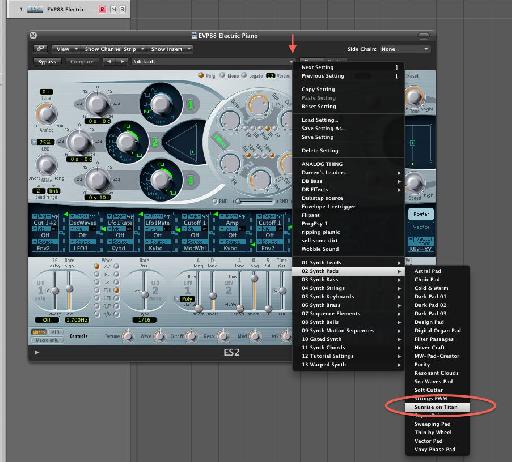 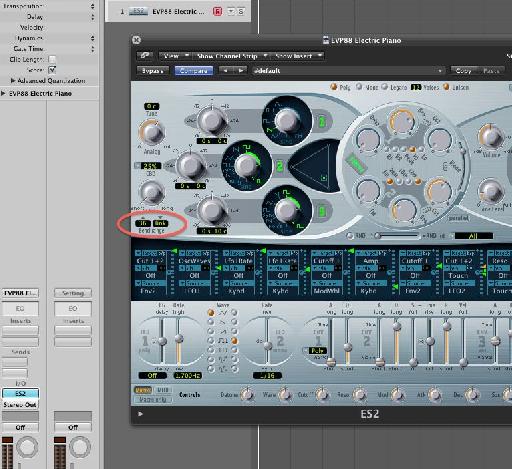 Right click an empty spot in the arrange area of the ES2 track, and select 'Create Empty MIDI Region.' You can also use the pencil tool to draw in an empty region. Stretch the region out to 8 bars by dragging its bottom right corner. 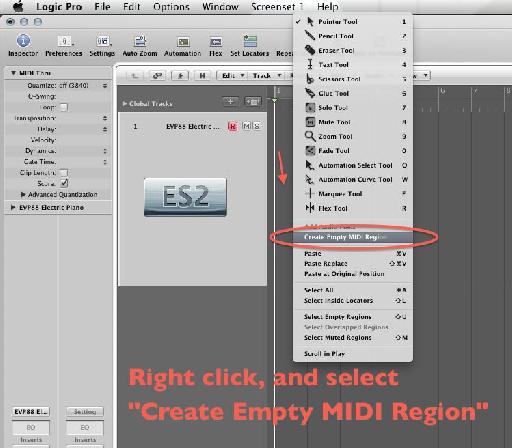 Right-click to create empty MIDI region. (N.B. If you don't know how to view the right-click menu as Darren has, ask him "how" in the comments below :)

Double-click the region to open it, and draw in a chord or note, and stretch its length all the way out to the full 8 bars. I drew in a C minor chord starting at C2. 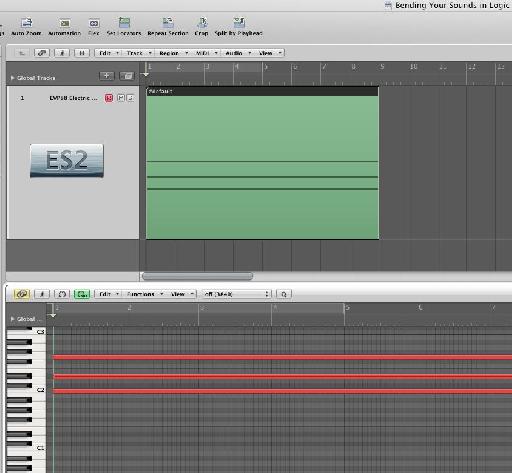 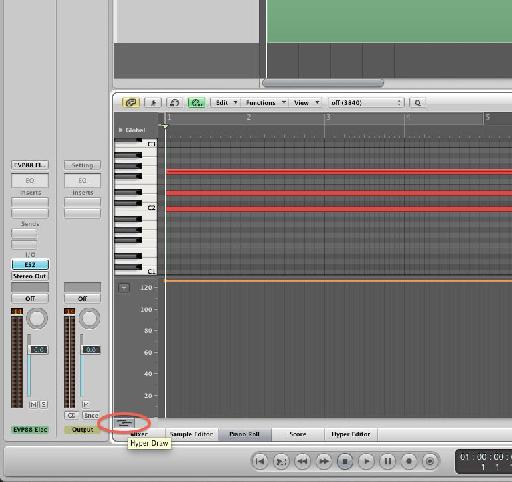 Click the small downward pointing arrow at the top of this area, and select Pitch Bend from the list. 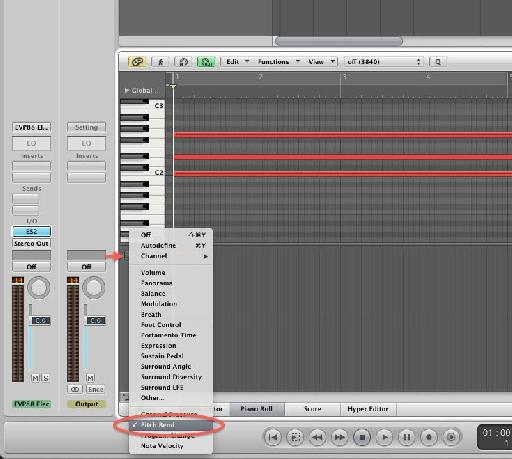 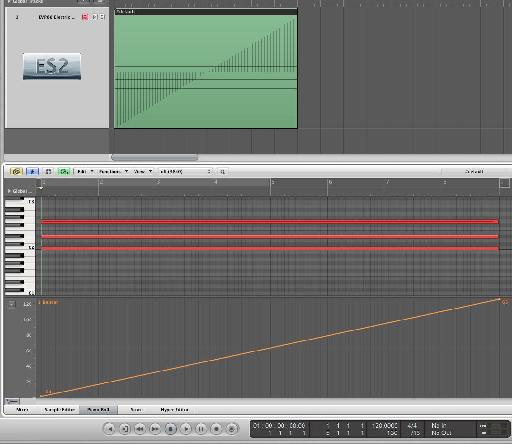 The drawn in HyperDraw data.

Here's a sample of how it sounds: 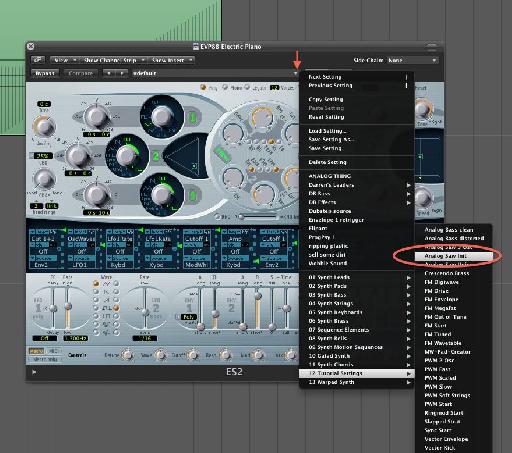 Play the sound first. Doesn't sound like much right? Now go straight to the Glide and set it straight up to around 640ms. 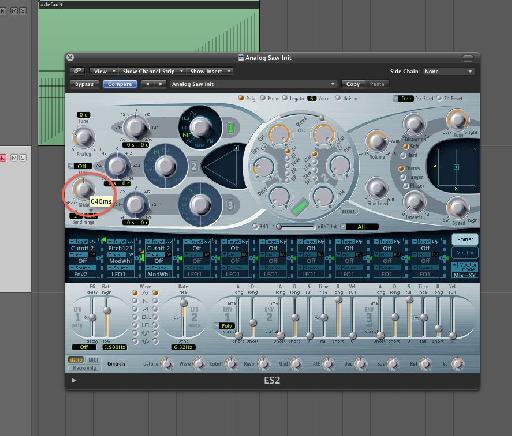 Adjust the glide value to 640ms.

Play some short notes, then the same notes an octave or two up. Sound familiar?! Portamento (or Glide in Logic's case), bends the notes up or down to the next note you play automatically. The time it takes for the notes to bend into each other is set with the glide knob (that's why the value is in milliseconds).

Here's how it sounds: Nice! You can now play a riff/melody normally as long as the notes never play simultaneously. When you're ready to bend, simply keep the prior note held before you play the next note! Add a little reverb and a slight distortion, and you've got a pretty useable sound on your hands with only a few clicks.

And here's how it sounds:

Hope you enjoyed the tip!

Darren Burgos
Darren started making music on computers when he was a teenager in 1987. His first computer was an Amiga, and when he realized the power of computer-based production, his addiction for making electronic music began. Darren switched to Mac in 1994 and started using Logic Pro. He's been involved in many music projects over the years including Psychoid. For two years Darren travelled with Apple showing Logic Pro to visitors of Macworld, NAMM, Remix Hotel and NAB. Currently, he teaches a class in L.A. on electronic music production using Logic for Logic Pro Help. Darren also runs two small businesses on Mixing, Mastering and Logic Pro training and support.
Related Videos
Comments (3)

Dream It. Do It.
Do you want to learn Olav's Electronica Workflow Tricks?
Yes, I want to learn!
No Thanks, I just want to read the article.
Feedback
How are we doing?
We'd love your thoughts, feedback and questions regarding our new site. All feedback is appreciated!
We do not respond to this form! If you need support, please visit our support page.
Thank you for your input!
Your message has been successfully sent
Course Advisor
Don't Know Where To Start?
Ask A Course Advisor