All Articles Review
Bitwig Studio 2.3: Down and Dirty With Phase 4
Matt Vanacoro on Sun, March 4th 1 comments
Matt Vanacoro has been road testing Bitwig Studio's new synth, Phase 4, and likes what it has to offer. Read on to find out exactly what he made of it...

Bitwig made a pretty big splash at NAMM this year when they dropped the Bitwig Studio 2.3 beta and announced a slew of new features. One of the new features, a very cool synth called ‘Phase 4’ works hand in hand with a host of upgrades to craft some truly huge sounds. I spent some time with the latest beta (and you should, too!) to tinker around with Phase 4 and I’m really excited to share what I found. 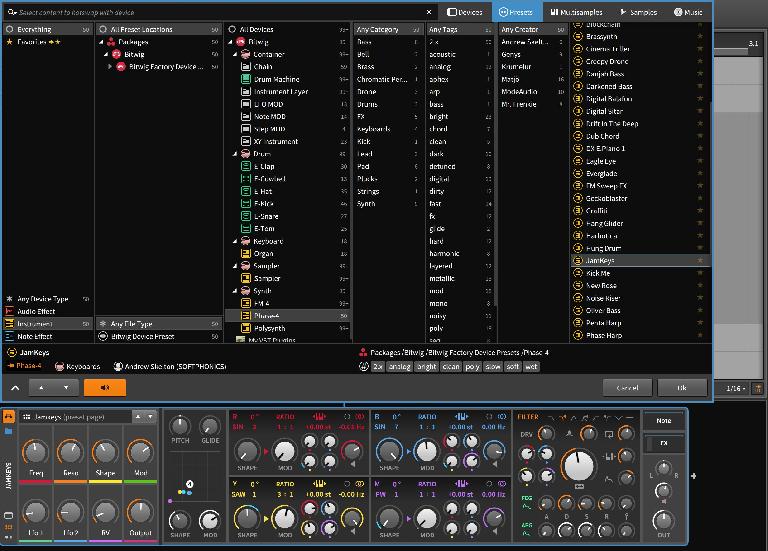 Phase 4 has a truly fantastic and diverse set of presets already programmed. This is great because Phase 4’s engine is based on the concepts of Phase Modulation and Phase Distortion which aren’t quite as common as your typical subtractive or wavetable synthesis. If you’re new to this concept, the presets are a great place to start. You can find something close to what you’re looking for and tweak it to your heart’s content.

A Window With A View

New to Bitwig 2.3, the Expanded Device View feature puts the most important information absolutely front and center. You simply click on the expanded view button at the bottom left side of the device, and *wham*, you’ve got a huge ‘top down’ look at what you need to see. In the case of Phase 4, you can see all 4 phase algorithms up on the screen, and utilize the preview window of each algorithm to manipulate things like shape, modulation, envelope, and such. You get real time feedback with the waveform display, and can drag around controls within it to modify your sound.

I’m going to be honest, when they first showed this to me at NAMM, they had it running on the Microsoft Surface studio, and it absolutely made me want to ditch my Mac Pro and pick up that glorious touch screen. To get your fingers right on the waveform and directly manipulate it… just felt so connected. Apple can’t make a touchscreen iMac soon enough, in my opinion! 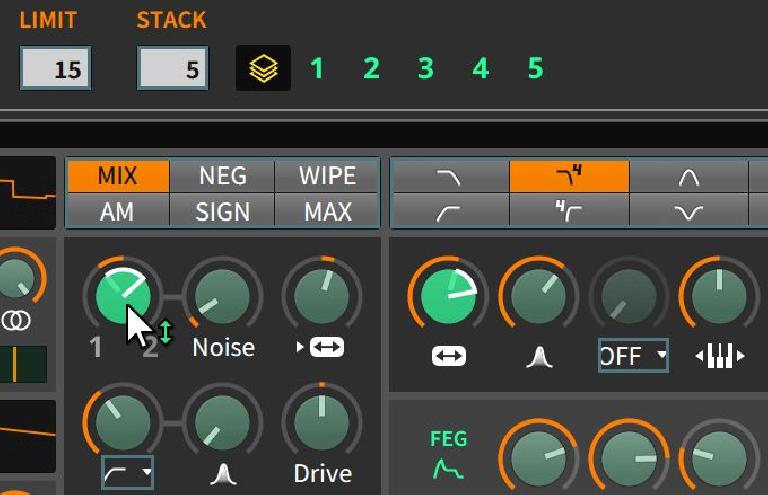 The other new feature that really works ‘hand in hand’ with Phase 4 is Voice Stacking. Think of voice stacking as a super fast way to instantiate another instance of a synth in your DAW but without the loading time, extra track to manage, and extra channel strip to arrange. By using voice stacking, you simply increase the number of voices stacked and you’re given a ‘double’ of the track - similar to ‘unison’ on a traditional synth. Where it gets fun, however, is that you can quickly access each individual ‘version’ of the stack and edit parameters. So if you go from a single instance to a 2-voice stack, you can quickly open up the 2nd layer and adjust the shape of an oscillator, adjust the envelope, etc… it’s a way to make HUGE sounding synths in a matter of seconds.

The Bitwig Studio 2.3 beta is available NOW, and it’s definitely worth checking out. There’s a lot of new features to enjoy, but Phase 4 working hand in hand with the Expanded View and Voice Stacking is my favorite for sure!

Learn Bitwig Studio from start to finish in the Ask.Audio Academy: https://ask.audio/academy?nleloc=category/audio/application/bitwigstudio
Related