All Articles News
Bitwig Studio 3 Announced, Now Fully Modular With New Grid System
Hollin Jones on Wed, January 16th 2 comments
The Grid is a brand new routing and processing system built right into the heart of Bitwig Studio 3 and it's going to change the way you make music. Here's what you need to know.

Huge news from Bitwig - the developer has announced the upcoming release of a major new update to its flagship DAW - Bitwig Studio 3! "Released in 2014, Bitwig Studio 1 was the first music production software to combine linear and non-linear sequencing on Windows, macOS and Linux. It paired cutting-edge technologies like plug-in crash protection, nested devices chains, and a highly flexible user interface — with a lightning-fast workflow for keyboard, mouse and touchscreen.

Bitwig Studio 2 arrived in February 2017 featuring modulators, which could be added to any device or plug-in. Along the way, version 2 added additional audio stretching algorithms for various situations, an advanced phase-modulation synthesizer (Phase-4), our Sampler reborn with wavetable and granular options, and native integration with modular hardware via control voltage (CV) and gate signals.

Today, we are announcing Bitwig Studio 3, which opens a new window for working with sound: The Grid." 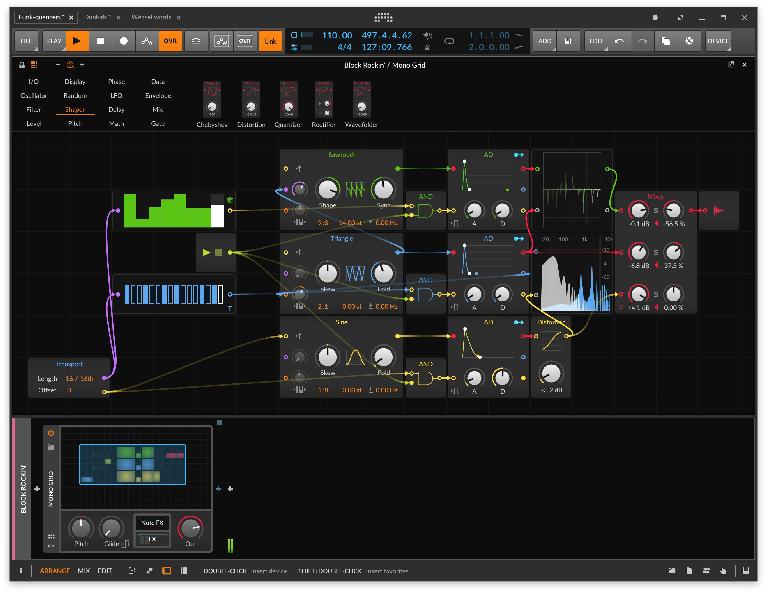 As was hinted at from the start, Bitwig Studio was always intended to provide a fully-modular sound design option, and this has become reality with The Grid. The Grid is an open modular environment built in to three new devices: Poly Grid, Mono Grid and FX Grid. While all Grid devices work in the same way, each allows for different configurations. Want to build a polyphonic synth? Start with Poly Grid. Need an adaptive audio effect with your signature sound? FX Grid will chew up incoming audio, either gently or otherwise. In the mood for cascading drones? Mono Grid is a great workbench for you. And when your idea morphs, just take what you’ve made and move to a different device.

Sporting a bevy of Grid modules and a supersonic patching workflow, The Grid is a truly modern modular patching environment that lives within its family of new devices. Ideal for designing sounds and harnessing synthesis.

As a new, native element in Bitwig Studio, The Grid is accessible in myriad ways.

The technology powering The Grid is as it should be: working, felt, and transparent to the user. Here’s a taste of what we’ve done. In The Grid, all signals are created equal — and 4x-oversampled for the highest sound quality. All signals are interchangeable so any out port can be connected to any in port. Every signal is stereo. That includes control signals, which indirectly affect audio. And plenty of modules can Stereo-ize signals, adding variety where needed.

With The Grid’s quick workflow gestures, new modules can be dropped directly onto ports, automatically wiring them into your patch. And for signals that are needed regularly, we have the option of pre- cords. These clickable icons appear beside in ports, allowing common connections to be made wirelessly.

Phase is the place. After pitch, timbre, and loudness, phase is the essential element of sound, capable of driving basic time functions, complex modulation synthesis, and so much more. With a dedicated category of phase modules, we have made these concepts freshly accessible and newly relevant for modern music production.

Bitwig Studio 3 will be previewed at NAMM (January 2019).