All Articles News
Bolt Is The First Softsynth Release From Hardware Specialists Nektar Tech
Hollin Jones on Thu, December 20th 0 comments
16 voice polyphonic with 2 oscillators per voice, Bolt is a confident first foray into the world of plug-in synthesis from the maker of Impakt and T-series hardware controllers.

Nektar, developer of advanced and multi-functional MIDI controller keyboards with deep DAW integration, has today announced the release of its first ever virtual synthesizer - Bolt. 16 voice polyphonic with 2 oscillators per voice, it's also seriously affordable. Here's the details.

BOLT enables a different and fast approach to sound design with an unusually organic and warm sonic character. Harmonics Synthesis generates and shapes the sound directly in the oscillator: It doesn’t require the dedicated filter section typically found on subtractive synthesizers. By turning just one knob, a wave’s shape can be changed from dark and subtle to bright and overtone-rich. 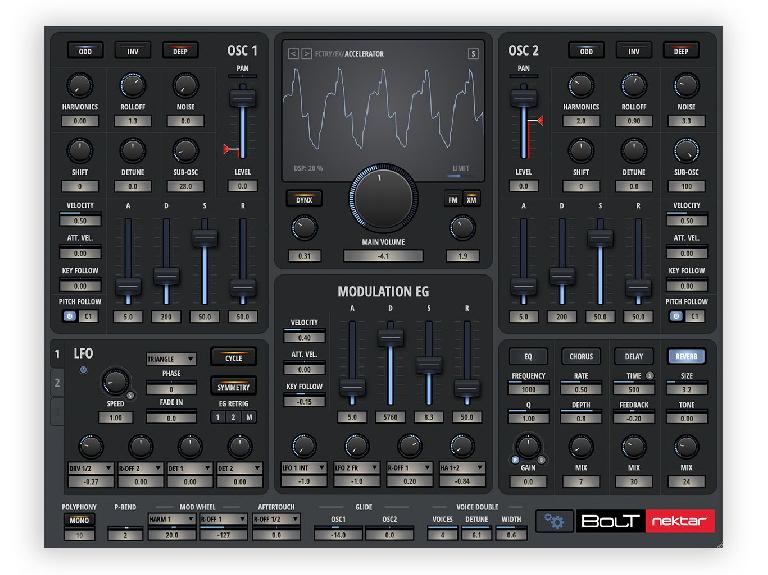 Harmonics Synthesis is based on the MSO (multi sine oscillator) concept by Professor Dr. Udo Zoelzer of Helmut Schmidt University in Hamburg, Germany. Mr Zoelzer is a scientist with decades of experience in digital signal processing and a passion for audio and synthesis. Over the last two years, the university and Nektar have collaborated on developing MSO into a full-blown synthesis engine.

BOLT is up to 16 voice polyphonic and offers 2 oscillators per voice, each equipped with suboscillator, noise generator, distortion and a dedicated ADSR envelope. Three syncable LFOs and a Modulation Envelope provide extensive modulation features. The number of overtones is set with BOLT’s Harmonics parameter, Rolloff additionally adjusts the steepness of the Harmonics “cutoff”. Apart from standard waveforms such as sine, saw or square, Harmonics Synthesis is also capable of generating pulse chains and alternating shapes. Cross modulation between BOLT’s two oscillators opens the door to FM-like sounds and all sorts of modulation mayhem.

A Voice Double mode provides unison features and 4 integrated effects processors simplify the creation of production-ready patches. Over 500 factory sounds, including many artist patches, demonstrate the flexibility of this new synth engine: Lush pads, deep basses, screaming leads or percussion sounds that almost sound sampled are just some of its strengths. The triple LFO section allows the creation of interesting rhythmical soundscapes and drones. 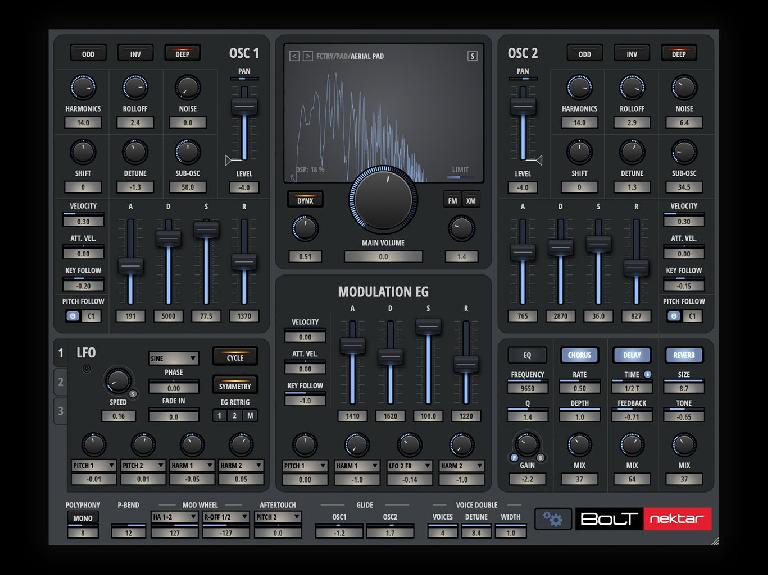 The BOLT plugin is compatible with VST, VST3 and AU and runs on all current 64bit Mac OS and Windows systems. The recommended retail price is $ 99 US with a special introductory offer of $ 69 US until January 31st, 2019.