All Articles Audio Software
Electro-Acoustic Jam Session Max Msp.
Andrew Turner on Wed, October 6th 0 comments
Language
Tonight I am in the studio with local legend Mike Anderson, master storyteller, composer of children's music, and dulcimer player.Â  We will be recording directly to a Tascam CD-Recorder through a Ma .

Tonight I am in the studio with local legend Mike Anderson, master storyteller, composer of children's music, and dulcimer player.  We will be recording directly to a Tascam CD-Recorder through a Mackie mixer and an omnidirectional Sure KSM-44, and a Sure condenser mic. How satisfying it is to bypass the computer entirely and record without a central processing unit. Part of me still thinks about the process of improvisation during composition. Only the mind is capable of expressing itself through the beauty of music, expressed through instruments.

The computer as an instrument is both lauded and despised, in times past it has been tucked away in the music lab at Universities and Colleges, merely running Sibelius for the enterprising theory students. In a real-time setting, virtual instruments are now able to recreate the articulations and tones of real instruments, such as the dulcimer that Mike is playing tonight.   As any Chef will tell you, though, the secret is in the sauce.

Still as the strings ring with a color that betray their brass makeup, the network cable attached to my loaner laptop reminds me that copper strands are a distant cousin wanting to join the party. The computer as an instrument has come of age, and oftentimes sits alongside guitarists atop a keyboard stand, with a midi controller strung off the ol' macbook running Mainstage, cared for by the keyboardist who invests in his computer, the hope of flawless execution (with an iPod in tow in case of the computer freezing or crashing). Instrumentation aside, the beauty of composition is in the eye of the beholder, in the ears of people of any language, any age.  This universal language binds us together, yet the composer's entreaty can comprise a myriad of colors, tones, scales, modes, or time signatures.  If computers could do as much for music as they have for business and science, what would the world sound like?

Enter Max Msp. Created by Cycling '74 decades ago, Max's humble beginnings as a synthesizer and midi management hub has flowered into a fully-featured environment capable of producing compositions as well as rich sonic textures. Both a synthesizer and a sequencer, Max connects the worlds of the computer programmer and the composer. Its visual appeal and concise approach make for a surprisingly powerful way to tap into the fire-hose of information technology mutated by the mind's eye of an abstract artist's sonic imagination.

Figure 2: Filling in the gaps (automatically)

As Mike plays the jaw-harp, he tells us that it is a world-class instrument, handed down from generation to generation. Given to him from his Grandfather, a frugal immigrant, young Mike learned to appreciate more bang for your buck. That's really what Max is about: minimal resources, maximum impact. Even though the mouth harp was worth about fifty-cents, it became a very valuable educational tool. It actually resonates with your skull, and uses your breath to modulate the timbre. With the ubiquity of computers, Max is very similar. You use your mind to create the song.

In Alabama, they call the mouth harp a frog fiddle. When Mike was 14 years old, his Grandfather asked him to play the mouth harp at his funeral. In the Iowa graveyard, with a 20 mile per hour wind, in the middle of winter, at the behest of his Grandfather's wishes (despite using up Iowa farmland as his eternal resting place), the minister gave Mike a nod and Mike played his Grandfather's favorite song "Cripple Creek", a song about healing. The jaw-harp, a world-class instrument, hand-crafted in the key of E, has made for an enduring legacy despite its minimal and simplistic interface. The music is what matters.

Figure 3: Mouth Harp handed down through the ages. Attribution: wikipedia.org

Max's cousin, free-of-charge, Pure Data, shares this spirit of innovation and even runs in the browser with html 5. One use of Max is the ability to flesh out a skeletal composition with variations on a theme that enlist mathematical phenomena. One of these, is probability.

With Max, a simple drum arrangement can gradually iterate through infinite variations on a theme, based on a relatively easy approach. The probability tables that you can feed into a 16-step drum sequence can blossom into a seemingly infinite number of permutations that allows for a highly competent accompaniment in the rhythm section. 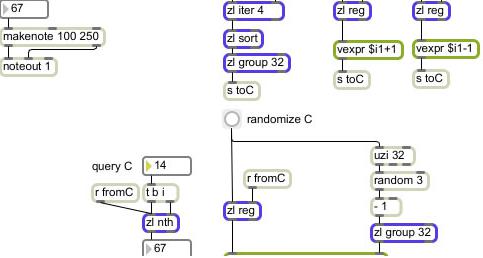 I encourage you to download a demo copy of Max available at Cycling 74's website, and look into the Data Processing Tutorial #5: List Processing. You may instantly recognize this sound as classic electronic a la Autechre in the very early 21st century, or perhaps not recognize this sound at all, perceive it to exist in a futuristic band similar to the Cantina Band from Star Wars. Whatever approach you may take to music making, I hope that you will see not what you can do for your computer, but what your computer can do for you. You might just make beautiful music together!

Once you have the tutorial open, click the link to open the interactive tutorial patch, and check the box labeled "Start." The drums will start playing the selectable output on your computer, or the internal midi synthesizer. Drag your mouse over the multi-slider labeled "C" to draw a melody line. Click the buttons labeled "Rotate A", "Reverse B", "Sort parts of C", and "Transpose C" to alter your arrangement, using Max's probability algorithm.   I think you will be inspired by the possibilities that instantly come to mind when listening to this new robo-rhythm-accompaniment. We will dig a little deeper into what each element in this flow-chart style of programming means. From a thirty-thousand-foot view, it looks a little like sheet music. But up close, it soon becomes clear that you can take your ideas as far as your imagination can possibly reach, which is probably the best reason I can think of for investing over 2 years of my life with Max, and I'm only scratching the surface! I hope you will, too.

Mike told a story: he said soldiers can make an instrument from just about anything, during the boredom (amidst the periodic, momentary ferocity) of war. The light of music can, indeed, illuminate the soul, whether coming from a mouth harp, a cigar-box dulcimer, or the very computer you are using to read this post. Next time, we'll look at making a musical scale with 7 numbers and a multiplication symbol, which costs a lot less than 50 cents to make!

You can whet your appetite and learn more about music making on a Mac or PC here.

Andrew Turner
Andrew Turner, founder of Deep Life Records (deepliferecords.com ), has released music on N*Soul Records (LA, CA), PWM Records (Australia), Giant Squid (SD), subVariant (CHI, IL) and has remixed and produced tracks since Windows 95's plug-n-play feature was all the rage. His new project under the alias JahWarrior is inspired by the artists from the Blood and Fire label from the early 70?s, who used innovative methods of production using the mixing desk itself to produce "effect motifs" such as feedback loops, and creatively manual automation on the sends. Andy is also highly influenced by the likes of Orb and Autechre, who employ on-the-fly and stochastic, algorithmic, generative methods in music production. He has performed at festivals such as LifeLight Festival, Cornerstone Festival, has hosted a brief residency at Brazil in NOLA, Club Pompeii in Phoenix, and promoted house parties and club events in the Mid-West when he was a young'in. Currently he is using max for live, reaktor, processing, arduino, and open sound control with multi-touch interfaces like the iPad and monome. His niece Ruth sometimes assists him in the studio with her new Casio SA-45.
Related Videos
Comments (0)