LITTLE FERRY, NJ, USA: recording technology trailblazer Eventide enters a new plug-in paradigm as it proudly announces availability of FISSION  — featuring its seminal STRUCTURAL EFFECTS  technology for the first time to employ a patent-pending technique for cleanly and completely separating the transient and tonal components of any sound — as of February 27...

While traditional implementation approaches are limited by their reliance on dynamics processing, as a proprietary plug- in methodology Eventide’s STRUCTURAL EFFECTS  enables the cutting-edge company to take an altogether different and fundamentally new stratagem to change course entirely — employing frequency-and-time-domain-sifting to, in effect, deconstruct a sound. So STRUCTURAL EFFECTS  separates sound into its transient (impact/unpredictable/jagged) and tonal (sustaining/stable/smooth) parts more effectively and accurately than previous processes, in other words. Which is why FISSION  features individual multi-effects in its TRANSIENT EFFECTS and TONAL EFFECTS sections.

Since it is the first plug-in to use STRUCTURAL EFFECTS , FISSION  facilitates a wide range of hitherto unheard effects — encompassing subtle to strange, with much in between. Best of all, it’s a new tool for traditional, utilitarian uses. It’s also a new tool for working with classic effects like delay, EQ, and reverb. Really, it’s a looper’s dream!

Deal-breaker still needed? Well, with FISSION  that conceivably comes courtesy of its fresh FOCUS control... creative license to ‘guide’ separation to suit. An ability to ‘solo’ and mix the deconstructed audio allows for forensic and low-key changes to be easily made. Modify, delay, or remove the transient plucks of a guitar part without affecting the tone; retune a snare drum without touching the crisp transient; modify, delay, or remove the tonal component of a piano line for a more staccato sound — FISSION  is more than a plug-in... it’s truly the first of its kind! 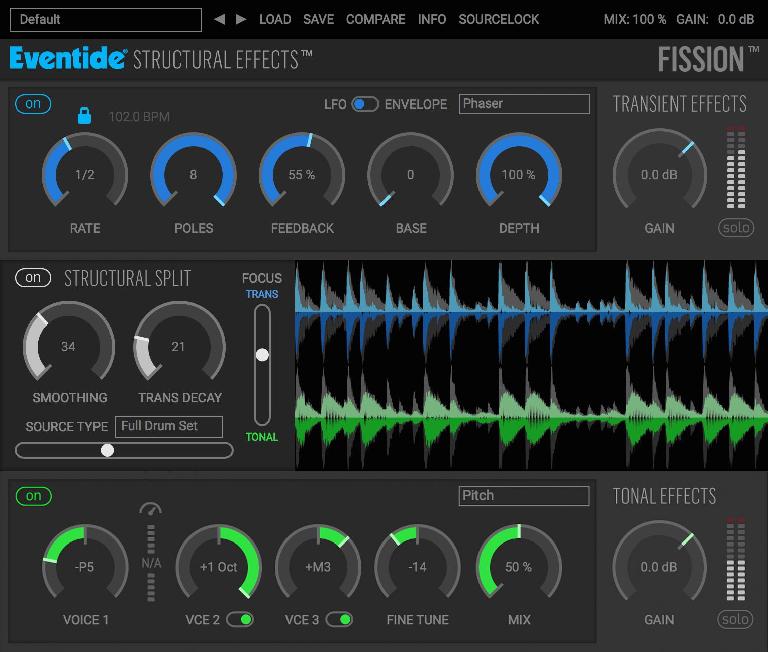 Eventide Managing Director Tony Agnello admits, “We named the main separation control FOCUS, because we didn’t know what else to call it. That may sound silly, but if you have a knob that does something really useful and you don’t know how to label it, you may be onto something.”

Something special is exactly how Eventide Senior DSP Engineer Russell Wedelich sees STRUCTURAL EFFECTS . “It’s a new approach for modifying sound. If you can imagine that any sound is a combination of tonal and transient components, our method can be thought of as sifting sound. We’ve developed a ‘sieve’ which cleanly separates the smooth gold (tonal) from the jagged sand (transients).”

Able analogies apart, the understandably excited engineer is keen to keep pushing forward: “FISSION  is the first member of a new class of processors. We plan to develop a family of products based on this new technique, so stay tuned!”

There it is, then... out of the mouths of managing directors and engineers comes the voice of truth. Truth be told, FISSION  sees Eventide entering a new plug-in paradigm.

Put it into play and be prepared to be amazed by its fanciful features for splitting audio into transient and tonal components, with six effects — Delay, Tap Delay, Dynamics, Phaser, Reverb, and Gate + EQ — available for the transient component and six effects — Delay, Compressor, Pitch, Chorus, Reverb, and Tremolo — available for the tonal component, plus an ability to solo and/or modify either component. Confounding expectations further still, split, modify, and reassemble any sound while fine-tuning the split using four STRUCTURAL SPLIT — SMOOTHING, TRANS DECAY, SOURCE TYPE, and FOCUS — controls with waveform display for clear tracking of transient/tonal audio in realtime.

Rounding off this new approach for modifying sound by adding an array of sound-splitting presets from first-class creative performance and recording artists (including Richard Devine, Chris Carter, Suzanne Ciani, Joe Chiccarelli, John Agnello, Stewart Lerman, Steve Rosenthal, and Kaitlyn Aurelia Smith), Eventide is clearly on to something special with FISSION.

FISSION  is available now (as an AU/AAX/VST plug-in for Mac OS 10.7+ and Windows 7/8) for 45 days at an introductory price of $97.00 USD — rising to an MSRP of $179.00 USD thereafter — from Eventide dealers and its website: https://www.eventideaudio.com/fission
Related