All Articles Audio Software
Everything Producers Need To Know About Drum Maps
Joe Albano on Mon, October 23rd 1 comments
If drum maps seem confusing and mysterious, fear not! Joe Albano is here to demystify the ways in which different systems and setups deal with translating drums to your MIDI keyboard.

Virtual drum instruments present a unique consideration—how to map the drums across the keyboard for live playing of drum parts. With other sample-based instruments, the mapping is, of course, based on pitch—the individual samples are assigned to Root Keys that correspond to the notes on the MIDI keyboard that match the actual pitches sampled. But since the individual drum and cymbal samples in a virtual kit are un-pitched, key assignments are made at the discretion of either the person designing the patch, or the end user. While there is a standard for this, it’s not universally used, and different drum instruments often utilize different arrangements of drums across the keyboard. This brings up a number of issues, which this article will take a brief look at.

It’s logical to start any discussion of drum mapping with the one established standard—the General MIDI (GM) Drum Map. This was established as part of the overall General MIDI standard for maintaining compatibility when sharing MIDI recordings with other musicians and collaborators. The GM Drum Map sets standard key assignments for the drums and cymbals in a typical trap kit, as well as assigning keys to a variety of other common percussion instruments. 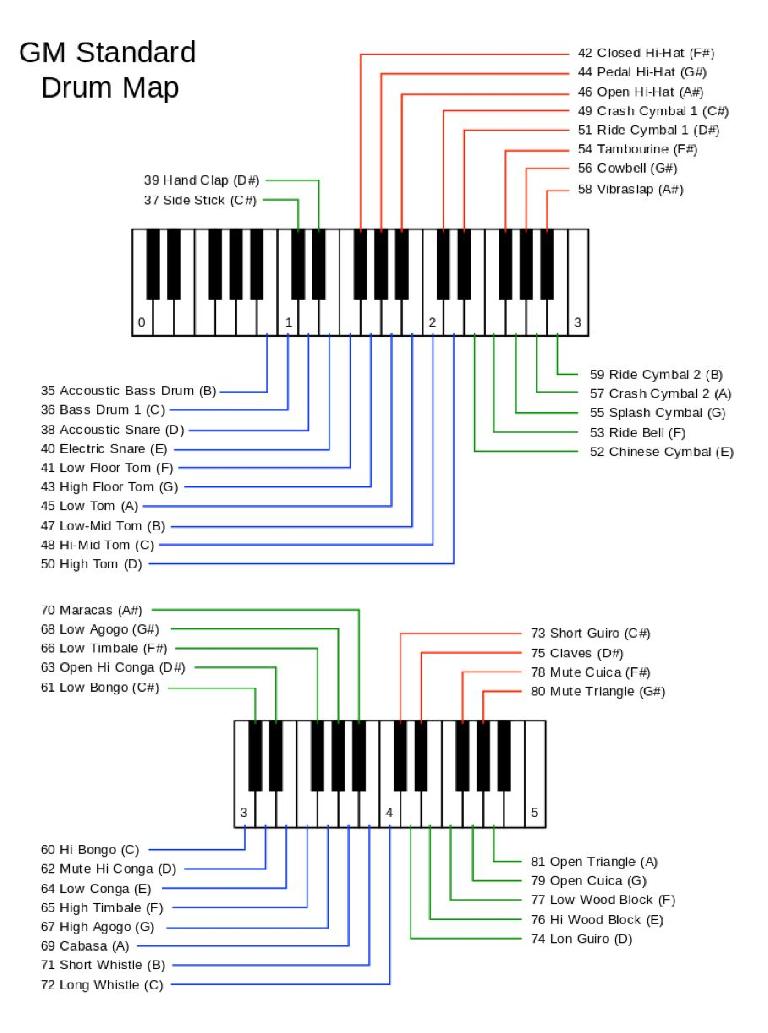 Obviously, the biggest advantage of this standard is to allow MIDI drum parts to play on drum instruments from different manufacturers with all the correct drums being triggered. As long as the drum recording was made on an instrument that utilized the standard GM drum assignments, it should sound correct on any other instrument that adheres to the same standard. So most makers of drum instruments either utilize the GM mapping, or at least have an option to implement it for compatibility, and this is a good thing.

However, most of the high-end virtual drum instruments also use their own custom drum maps, none of which are compatible with each other. So if the GM Drum Map is so useful, why is it so often derided by MIDI finger-drummers and cast aside by virtual drum makers in favor of other maps?

While the GM Drum Map is effective as a standard for compatibility, it comes with a number of limitations both in design and application. Even when the map is used successfully to maintain compatibility with MIDI drum sequences, the standardized drum assignments are defined loosely enough that there’s still the possibility that a drum sequence, though triggering the correct drums, will not match the sounds heard from the original instruments in use when the part was recorded.

For example, GM “snare drum” keys are vague as to the way the snare is played—if a replacement drum kit has assigned a sharp rimshot snare to a key that used a much rounder, less percussive hit in the kit that was used to play/record the part, faster riffs and drags that worked fine with the original sounds might not sound right on the replacement kit. In different drum instruments the “open hihat” key might contain hihat samples that range from relatively short and splashy to wide open and ringy, producing a distinctly different—and potentially inappropriate—musical effect if that sample is used for repetitive timekeeping (as opposed to only occasional open-close accents).

Couple that with the usual differences in velocity curves and tuning between different instruments, and it becomes clear that full musical compatibility is a little more complicated to achieve than just matching the right drums to the right notes. Still, maintaining consistent note assignments is still a requirement for any level of compatibility, so why is the GM note standard not universally loved?

The GM Drum Map was established in the early days of MIDI, when drum machines with simple sample sets were all that was available. Given the high cost and low capacity of memory at the time, a drum kit would usually have only one sample for each drum and cymbal, each assigned to be played from a pad on the drum machine itself, rather than from keys on a keyboard. As MIDI (quickly) evolved, playing drums from the keyboard became equally common, if not more common, and this introduced new considerations.

With the larger pads on some drum machines, it’s easy enough to play repetitive notes, but that can be a bit more difficult when triggering drum samples from keyboard keys. Anyone who’s even tried to play a really fast snare riff from a single key on an unweighted keyboard knows that it’s often difficult or impossible to play smoothly. The GM Drum Map does provide more than one key for snare and tom samples, but they’re usually assigned to different samples, rather than to the same sample to facilitate performance, and that’s one of the first complaints people often have about the GM map.

Right along with that are the actual key assignments themselves. Finger-drummers who build up a pattern by looping a section and overdubbing each drum in turn probably are fine with the GM assignments, but anyone trying to play a full-kit drum part is presented with an often-awkward layout. The keys are so close together that trying to execute faster or more elaborate patterns can frequently result in unintentional mis-triggered extra notes, and fills—especially round-the-kit snare->toms->kick+crash fills—can be difficult to play cleanly.

The other issue many drum makers and players have with the GM map is the lack of multiple samples from the same drums. For example, there are only two dedicated snare keys, but a snare can generate a variety of different sounds in the hands of a good drummer, and now that sample memory is virtually unlimited, the better kits often incorporate multiple samples of different articulations of the same drum/cymbal for musical and performance variety. Hihats are particularly limited in this regard. The GM map only provides three hihat notes—closed, open, and foot—while most virtual drumkits incorporate a half-dozen or more samples of in-between shades of openclosed hats, sometimes for multiple sticking techniques (tip, shank)—Logic’s Drummer/DKD kits offer three hihats sticking variations, each with seven open/closed levels. 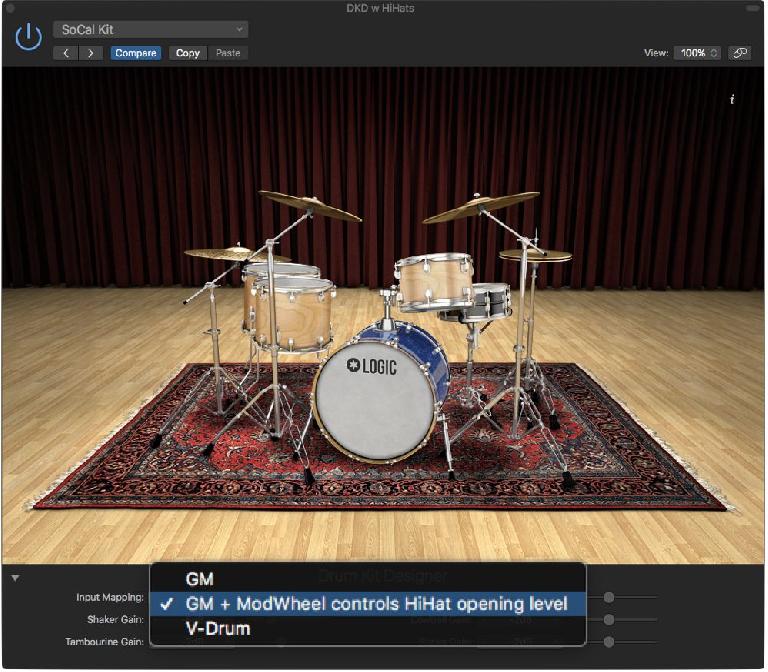 Virtual drum instruments that use their own custom maps typically seek to address these GM map limitations. There are typically at least two or more keys assigned to play back each drum sample, to allow for more effective and expressive two-finger playing of patterns and fills. Hihats often occupy a full octave or more, laying out the kit’s open/closed variations for easy playing—sometimes these open/closed samples can be crossfaded by the modwheel or other MIDI CC (like CC#4 “Foot Control”, as per Roland’s hardware MIDI V-Drum kits).

Extra performance techniques include things like cymbal choke keys, that cut off a corresponding cymbal sound from a different key (just like open/closed hihat keys do), and dedicated samples of playing techniques that are difficult to implement on a keyboard, like press rolls or drags (though more sophisticated virtual drum programing can be designed to allow for live performance of those techniques as well).

Different drum instruments’ custom maps all assign the drums to reflect the way their designers think they should be laid out. This can range from simply assigning keys to make extra sounds and articulations available, with little consideration of live keyboard playing, or laying the drums in a configuration that makes live keyboard drumming as natural and expressive as possible. 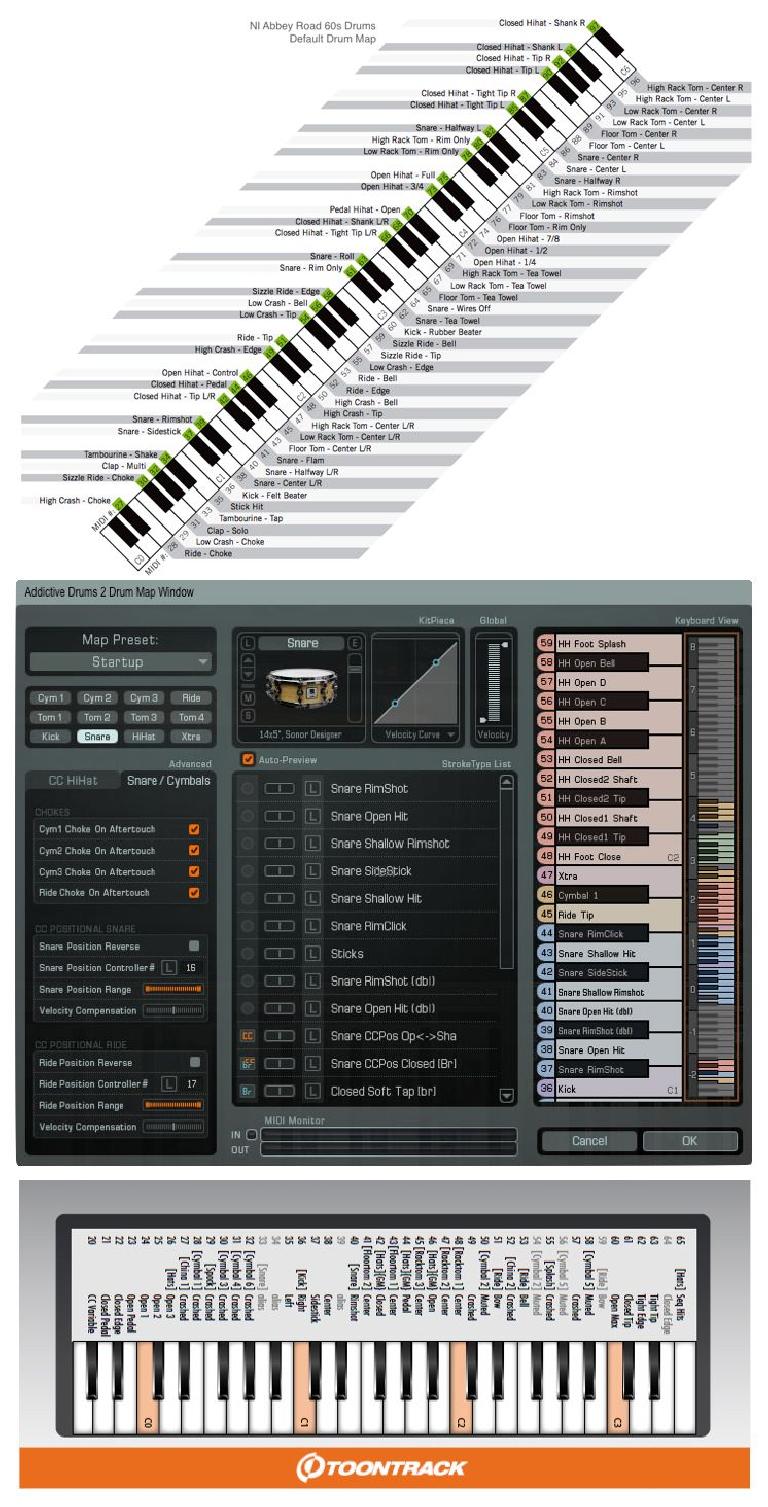 Personally, I use a custom drum map that reflects the positions of the drums as they would appear to a drummer sitting behind a real kit. Exceptions are the kick, which is off to the side so kick/snare patterns can be played with one hand, and the hihats which are to the right of the drums instead of to the left—cross-handed hihat playing is easy on a real kit, but would be extremely clumsy on a keyboard. Since I tend to play the full virtual kit in realtime, and I can play drums a little, I like this arrangement because I think it tends to promote patterns and fills that a real drummer would be likely to play, making for better, more musical—more drummer-like—drum parts.

Since each company’s preferred custom drum map is specifically tuned to the particular collection of samples provided, there’s no compatibility, which is why they all (or at least most) offer GM compatibility as an option within the plug-in. Unfortunately this can sometimes necessarily result in the loss of some of a custom drumkit’s performance nuances and sound variations, if there’s no way to incorporate the extra samples used into the more limited GM map, so the compatibility provided may not be able to take full advantage of an advanced instrument’s expressive capabilities.

If you’re using a less-elaborate drum instrument, or a drum patch in a general-purpose sampler, converting between a custom drum map and the GM map can still usually be done easily enough using the DAW’s built-in mapping capability. Most DAWs offer a note-by-note mapping option as part of their MIDI processing tools, or sometimes within a MIDI plug-in. For example, in Logic, it can be accomplished via a dedicated Mapped Instrument, or by re-purposing one of the MIDI plug-ins (the Chord Memorizer) as a mapper, set to re-assign a full keyboard’s worth of individual notes.

As with many aspects of MIDI, drum mapping can get a little more complicated than just using the limited GM standard, especially when more advanced, expressive drum instruments are used. But a little time spent understanding the issues and options can help MIDI keyboard drummers get the most out of the virtual drum tools at their disposal.

Dream It. Do It.
Do you want to learn Rhythm?
Yes, I want to learn!
No Thanks, I just want to read the article.
Feedback
How are we doing?
We'd love your thoughts, feedback and questions regarding our new site. All feedback is appreciated!
We do not respond to this form! If you need support, please visit our support page.
Thank you for your input!
Your message has been successfully sent
Course Advisor
Don't Know Where To Start?
Ask A Course Advisor