All Articles Logic Pro
Exploring Logic Pro X's Speciality Creative Processors
Joe Albano on Thu, May 25th 0 comments
Logic comes with a bunch of bundled plug-ins but while you may know the reverbs and delays, some of the more unusual models have much to offer, as Joe Albano explains.

Logic’s collection of built-in plug-ins includes pretty much all the different types of processors you could want - everything from the meat-and-potato mixing tools like dynamics, EQ, delay and reverb to additional effects like amp and pedal sims, imaging tools and utilities. A number of these offer interesting or unusual effects that provide something beyond the most common types of processing - this article will take a brief look at a few of those specialty plug-ins. 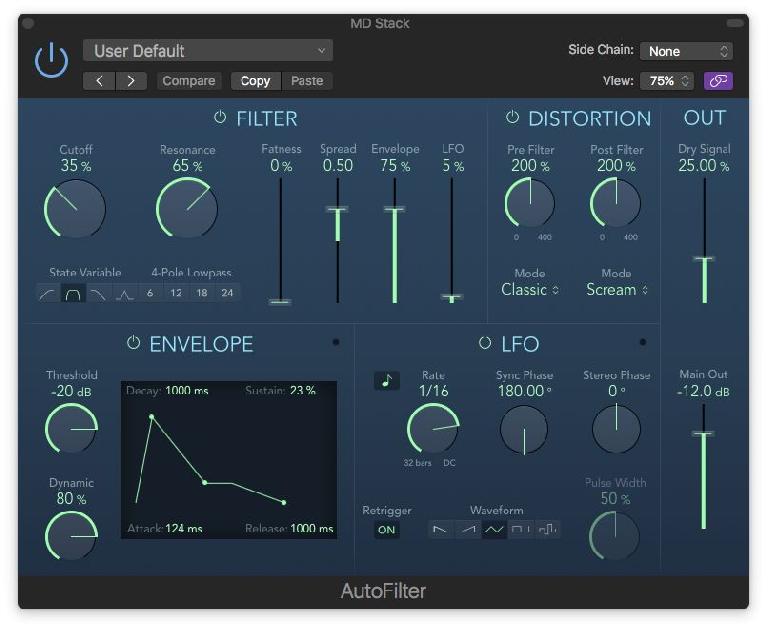 The first two effects I’ll mention are both primarily filter-based processors, but each brings additional capabilities to the table. AutoFilter goes the typical filter plug-in one better - actually three better, as it combines a multi-mode filter with a flexible distortion effect and Envelope and LFO modulators - it’s like running your audio through a synthesizer’s full-featured filter and modulation modules. The resonant multi-mode filter offers several modes, including a 4-pole lowpass filter with slopes that range from 6 to 24 dB/octave. Cutoff frequency can be modulated by the Envelope and/or LFO sections - the LFO offers several shapes, and can also be sync’d to Tempo - for anything from classic resonant filter sweeps to bubbly rhythmic filter patterns.

The distortion section can overdrive the signal at both the input and output of the filter stage, with three different modes that range from subtle overdrive to harder-edged distortion, adding another dimension to any filter effect dialed up. While the range of effects available in AutoFilter could probably be achieved by chaining several processors together, as an all-in-one they conveniently provide synthesizer-like control over any signal, turning any audio track into source material for synthesizer processing, and inspiring the user to creative experimentation. 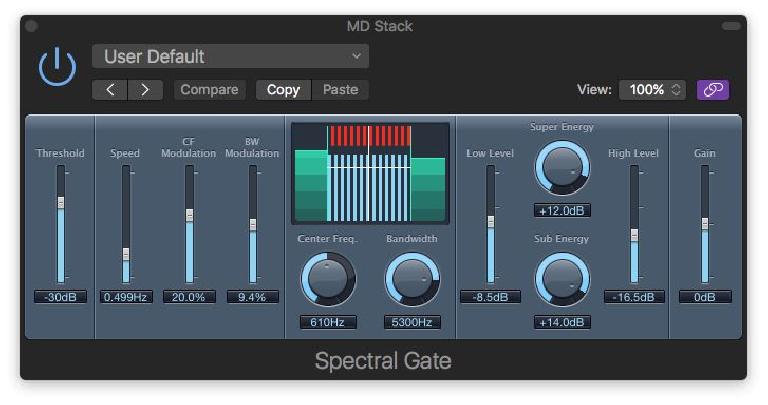 Spectral Gate is also a filter at heart, but with a twist. Center Frequency and Bandwidth controls divide the frequency spectrum of the signal into two bands above and below a center frequency band - a Threshold control determines when processing kicks in. LFO modulation for the Center frequency and bandwidth controls is provided, and you can balance the levels of the upper and lower frequency bands against the center, as well as dial in a little of the original signal for parallel processing.

Basically, you’re running your audio signal through a crossover and sweeping the crossover settings with the LFO; add a little Automation, and you can achieve some really wild sweeping or pulsing tonal variations. Once again, it’s like processing your signal with a modular synth’s filter & modulation sections, but after you’ve done some creative patching to separate the signal into different frequency ranges, for more interesting and offbeat variations of classic filter fx. 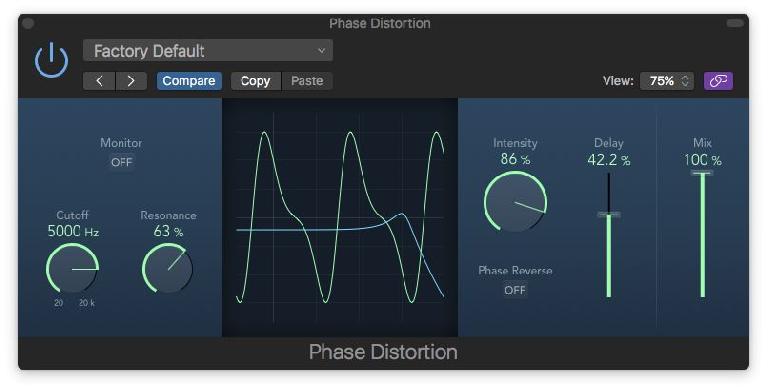 The next couple of plug-ins are primarily distortion effects, but they generate their distortions a little differently than the typical tube/transistor-style overdrive simulations. Phase Distortion creates additional harmonics and/or overtones, but not simply by overdriving a virtual circuit - instead it utilizes a modulated delay line to generate its spectrum of distortion components. But unlike typical delay/modulation effects, Phase Distortion doesn’t use an LFO as the modulator, it uses a filtered version of the input signal itself.

The signal is split, run through a Resonant Lowpass Filter, and then used in a sidechain to modulate the Delay. The settings of the various controls that affect the Filter, Modulation Intensity, and Delay Time generate different spectral components, distorting the original signal. At its more subtle settings, Phase Distortion produces a harmonic spectrum initially, but as the controls are tweaked for a stronger effect, the distortion spectrum changes considerably, creating more complex overtones and producing raspier, edgier distortion sounds.

Since the input signal itself is being used as the modulator, the effect will vary considerably with different source material - with a little experimentation you should be able to get some cool noises that run the gamut from metallic edge to splatty distortion. Phase Distortion offers up an interesting alternative to the usual harmonic distortion effects, especially for edgier styles of music.

Bitcrusher also offers an alternative to traditional harmonic distortion, but this time the distortion is generated by utilizing the traditional limitations of digital audio to generate edgy distortion spectra. It uses three methods to create its digital distortions—digital clipping, lowering the Sample Rate, and reducing the Bit Resolution.

Digital clipping is the closet to traditional analog (harmonic) distortion, but tends to be harsher, as the waveform is clipped abruptly rather than gradually as with (real or virtual) analog circuits  - rather than subtle analog “warmth”, the digital clipping here adds a rough edge. There are three different methods of clipping: “Clip” is straight-ahead digital clipping; “Fold” affects the center peak of the clipped portion of the wave; and “Wrap” smooths the entire clipped portion of the wave - each offers a slightly different character of digital crunch or buzz.

Downsampling reduces the Sample Rate (in multiples, 2X would halve it, etc) - this produces Aliasing, a side-effect of a normal digital sampling process. In converters, it’s avoided by the use of steep filters, but here they’re omitted, allowing for the production of high-frequency tones that are not harmonically-related to the audio. At the more extreme settings, they adding a metallic edge or ring to the sound.

Finally, lowering the Bit Resolution produces Quantization distortion, another by-product of (all) digital conversion - it’s always there, but at normal 24-bit resolution it’s too low to be audible; crank down the bit resolution here and you’ll bring up that distinctive digital fizz.

Adding some (or all!) of these digital distortions can take a bit of audio and trash it up nicely, again, for musical styles where that kind of edge is desirable. 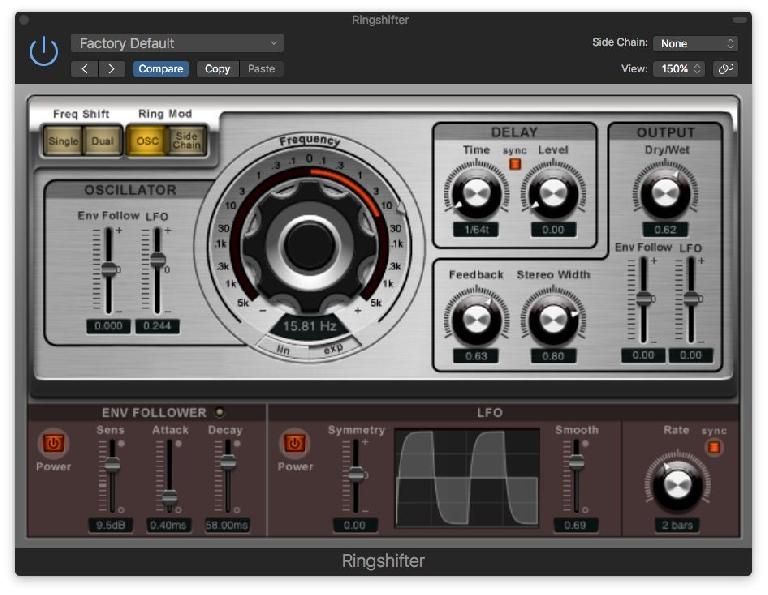 Ringshifter offers a choice of two modulation techniques—Ring Modulation and Frequency Shifting. Both of these can provide a range of effects from more familiar, subtle shifting or pulsing modulation effects to clangorous, metallic tones. Ring Modulation is a form of Amplitude Modulation, but when the modulator frequency is increased above subsonic rates, instead of tremolo you get new frequency content - not harmonics, but sum and difference frequencies, which deliver the clangorous, metallic timbres this effect is known for.

Frequency Shifting is different than regular Pitch Shifting - rather than preserve the harmonic relationships in a wave (when the audio is shifted up or down), a Frequency Shifter adds or subtracts a fixed number of Hertz to each harmonic and overtone, changing the harmonic structure, again producing metallic, edgy sounds. Envelope and LFO controls let you further shape the resulting tones, for a variety of special effects that work well on everything from drums to keys to voices. 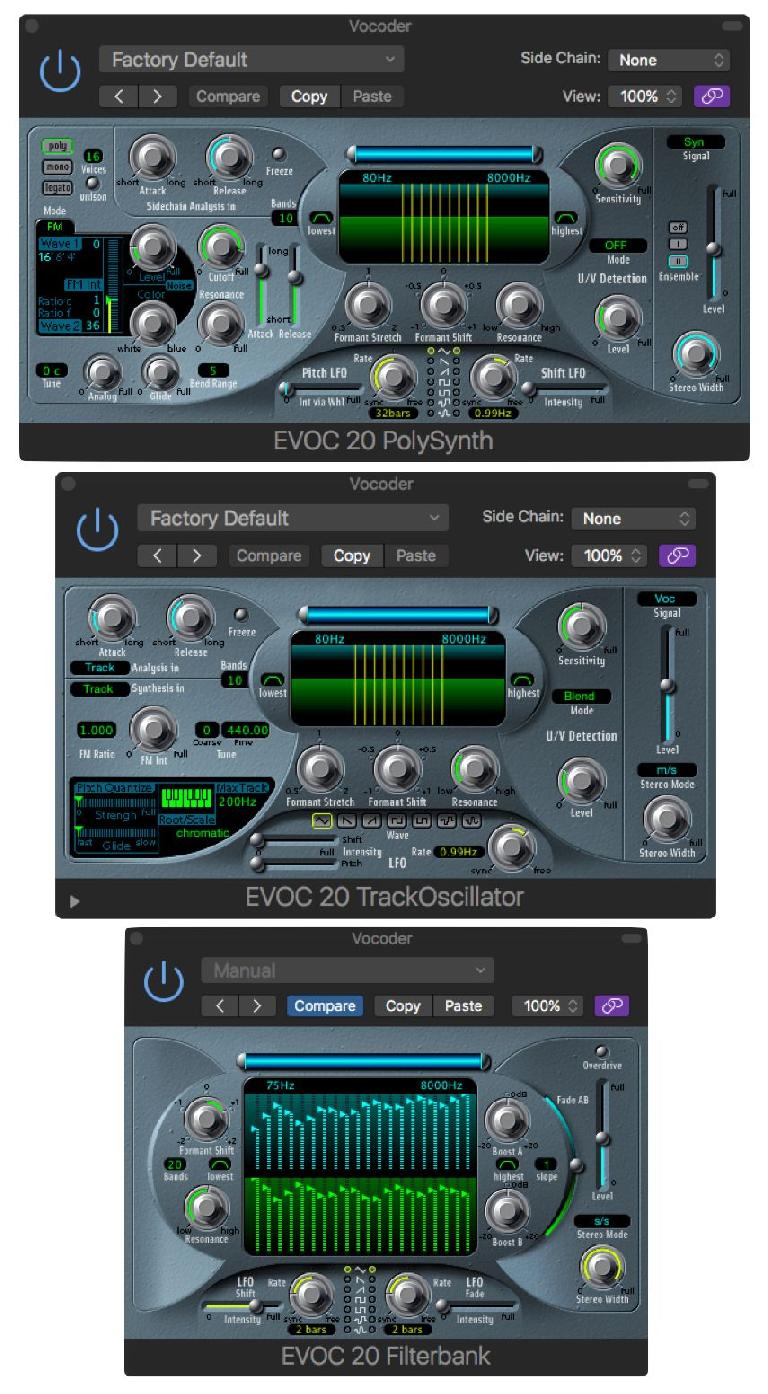 Hardware vocoders have been around since the 1930s - they’ve been used for voice synthesis and even encryption (in WWII), and were adapted for musical use (by Bob Moog, among others) in the ‘60s and ‘70s. Vocoders can generate a number of effects, from robot voices to quantized singing similar to the Auto-Tune effect. The classic Vocoder synthetic voice effect is the “singing instrument” or “singing synthesizer”, where a vocal is superimposed on an instrument, so it sounds like the instrument is singing.

Logic offers three Vocoder plug-ins, all based on their EVOC 20 virtual vocoder design: The Polysynth instrument uses the plug-in sidechain to impose the sound of an audio signal onto chords played on its built-in synthesizer; the Track Oscillator version does the same for an already recorded audio track; and the Filterbank version processes the audio with two parallel multiband formant filter banks. Their controls panels are too complex to delve into detail here, but I’ll briefly describe how a vocoder works..

Vocoder is short for VOice EnCODER. A vocoder encodes the characteristics of the voice (or other audio signal) using a bank of narrow-band filters - in the EVOC plug-ins anywhere from 5 to 20. In the classic “singing instrument” effect, the Vocoder breaks up an analysis signal (voice, or any audio signal) and an instrument signal (synth or audio recording) into narrow frequency bands, each coupled to its own Envelope Follower, and then superimposes the shape of the analysis wave (in the classic effect, the vocal) onto whatever the synth (Polysynth) or instrument (Track Oscillator) is playing (chords, melody). The Filterbank version offers a more familiar filtering approach, but utilizing the multiband formant filters in place of a simpler filter design, for distinctive, rich tones.

The EVOC 20 Filterbank on piano

We all get used to reaching for our favorite tools from the long list of traditional processors in Logic, but every one of these specialty plug-ins has something a little more unique and potentially a lot more interesting to offer, so go ahead and give them a try, if you haven’t already - your ears will be glad you did!