All Articles Synths & Sound Design
Fun With Formants - How Do They Work?
Joe Albano on Mon, May 20th 0 comments
You may have come across formants when dealing with pitch shifting or vocals, but what exactly are they? Joe Albano explains all in this handy guide.

Anyone using pitch processing—from the automatic pitch correction of Auto-Tune to the creative possibilities of editing tools like Flex Pitch—may have run into the concept of formants. Understanding what formants are, and what their relevance is to using pitch-based tools can be quite helpful when tweaking pitch for whatever reason, especially when it comes to vocals.

As you probably know, rich complex sounds are made up of multiple sine wave frequencies—harmonics and overtones. The lowest frequency—the Fundamental frequency—is the pitch of the note; the higher harmonics and overtones are not consciously perceived—they blend in with the fundamental—but their presence gives a sound its particular tonal quality, or timbre. As different notes are played and sung, the harmonics’ frequencies always maintain the same mathematical relationship—whole-number multiples—to the fundamental pitch, moving up and down as higher and lower notes are performed.

Further shaping of the tone is caused by physical resonances, which are the result of the size, shape, and materials of the resonating body of the instrument, or in the case of a voice, the resonating cavities in the body. So despite their obvious similarities, a grand piano has a slightly different tone than an upright—its longer strings, larger sound board, and greater resonating space (with the lid open) make for a deeper, richer tone—and two acoustic guitars each have their own distinct character, due to different woods, bracing, and depth.

The resonant frequencies are Formants—they emphasize the harmonics and overtones in their particular frequency ranges (there may be several), and that imparts a specific tonal character to individual instruments, distinguishing each instrument from others of the same type. Formants are mostly fixed in frequency, so the tonal character they impart is consistent for a particular instrument or voice.

When it comes to voice, formants are a major component of vocal tone. The specific combination of vocal formants of an individual singer are what give that person’s voice its unique tonal character—they’re a big part of what makes you sound like you. The formant frequencies and the effect they have on vocal tone is a result of the size and shape of the singer’s throat, nasal cavity, chest cavity—all aspects of the person’s vocal tract that contribute to the distinctive resonant quality of that individual voice. 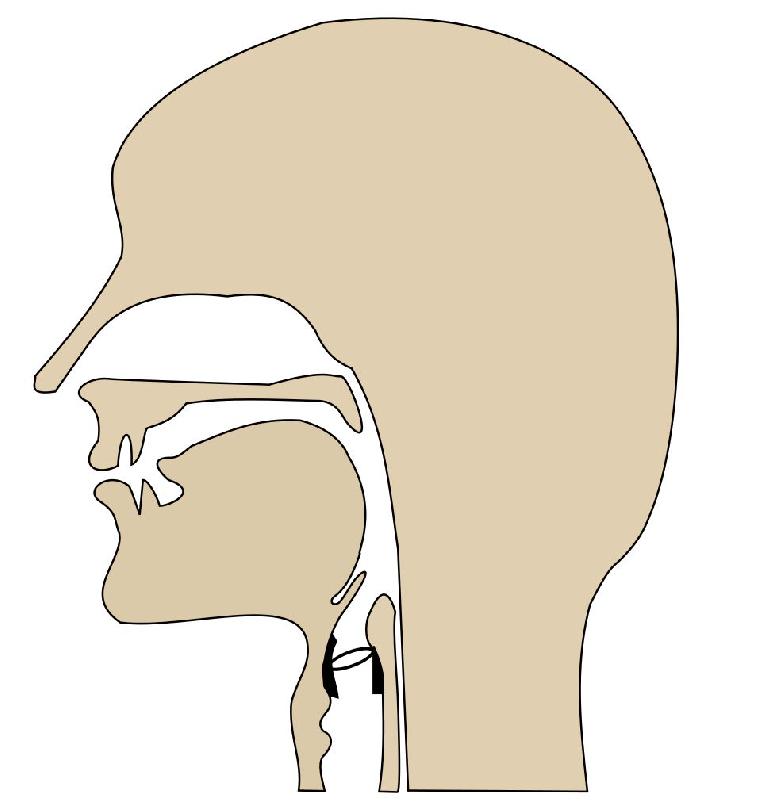 But if you start playing around with pitch processing, you can inadvertently affect the vocal formants, changing the inherent tonal character of the voice. While this might be done deliberately for special effect, as often as not it’s an unintended consequence of some creative pitch tweakery—like changing a recorded melody or generating a harmony artificially from the lead vocal. When this happens, you may notice an unwanted change in vocal tone—one that sounds like a familiar effect.

In the old days, if a producer wanted to change the speed—the tempo—of an already-recorded song, the engineer could speed up or slow down the tape machine, but this would alter the pitch of all notes in the recording. The speed change would also raise or lower the normally-fixed formant frequencies as well. If the formant frequencies change, then the inherent tonal character of the various instruments and voices will change too, altering the natural tone. With some instruments you might get away with a little of this, but with voices, pitch shifts of more than a semitone or two would usually result in a decidedly unnatural tonal character.

If a recording is sped up, the normally-fixed formant frequencies are raised; if it’s slowed down, they’re lowered. This will have the audible effect of making that voice (or instrument) sound like the size and shape of the resonating cavities are all either smaller or larger than normal, respectively. So if a vocal recording is sped up, it’s like the singer’s head and chest shrunk, imparting the tonality of a smaller body—like a child’s voice. The result is a squeaky vocal tone—a familiar effect long referred to as “munchkinization”, or maybe more familiarly, the “chipmunk effect”.

(The fanciful names come from the fact that recording speed manipulation was used back in the day to create the voices of the Munchkins in The Wizard of Oz, and the high squeaky voices of Alvin and the Chipmunks—a novelty record and cartoon originally from the late 50’s.) Conversely, dropping speed and pitch electronically effectively turns the vocalist into a giant, with a correspondingly deep, sepulchral tone often used to denote bad guys in the movies.

Formants In The DAW

The same effect will happen if the speed of a digital recording is changed by simple means, like lowering the sample rate. It’s an issue familiar to those who might choose to create their own sampled instruments. In a sampler a single sampled note can be automatically transposed in pitch by assigning it to a root key and then playing up and down the keyboard—the sample’s original recorded pitch will be transposed to follow the notes played, but the recorded formants will be transposed as well, and after a couple of notes up or down, the tone will get munchkinized.

That unwanted phenomenon gave rise to the practice of multisampling, where different recordings of each note of an instrument are made, and assigned to each key, with no individual sample transposition, or—to manage file size—at most transposition of no more than two or three notes per sample, which should keep the formant-shifting effect largely inaudible.

But while most users don’t get involved with creating their own virtual instruments, they are likely to use pitch-shifting tools that may allow formants to be shifted enough for the chipmunk effect to occasionally rear its head. For example, if a producer creates a vocal harmony from the lead vocal track (maybe to save time, or because the vocalist has already gone home), he may run into the effects of unintentional formant-shifting. With a close third-harmony, the effect may be just noticeable if the artificial harmony is soloed, but blending it in under the lead vocal might sufficiently conceal the slight squeakiness from pitching the notes up three or four semitones. On the other hand, a harmony a fifth above or a sixth below will be very likely to reveal some munchkinization artifact, even in context. 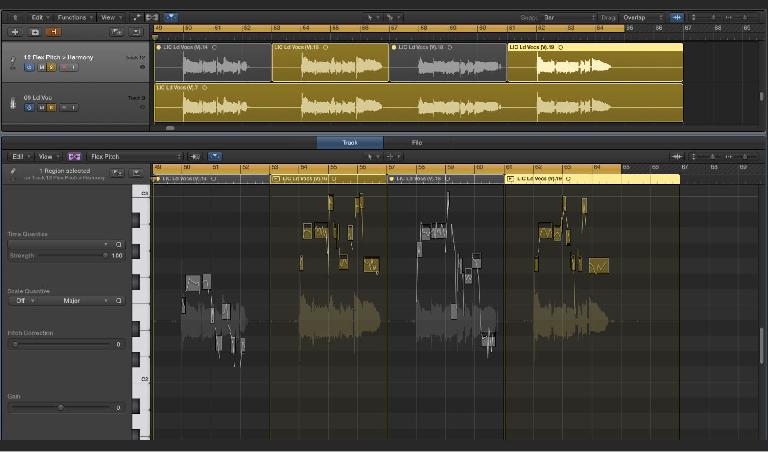 A Vocal Harmony Created With Pitch-Shifting May Need Formant Adjustment

More sophisticated pitch-shifting software may factor this in, and offer DSP-based processing to counter any unintentional frequency-shifted formants, to reverse the negative effect. So if a vocal pitch is transposed up, the DSP may try to compensate by shifting the affected formant frequencies down by the same amount. In theory, this should preserve the natural tone, but in practice there are limits on its effectiveness with larger pitch shifts. Some pitch processors adjust formants automatically, while others leave it to the user to apply this tech if it’s deemed necessary, and to decide by ear how much complementary formant-shifting is needed to make the voice sound a little more natural, without going too far and simply creating a different unnatural quality.

By way of example, in Logic’s Flex Pitch editor, automatic formant shift can be enabled, or formants can be manually shifted per-note in Flex Pitch’s piano-roll editing display, by grabbing the Formant handle of a pitch-shifted note, and dragging in the direction opposite of the pitch shift until the tone sounds as natural—or at least as artifact-free—as possible. 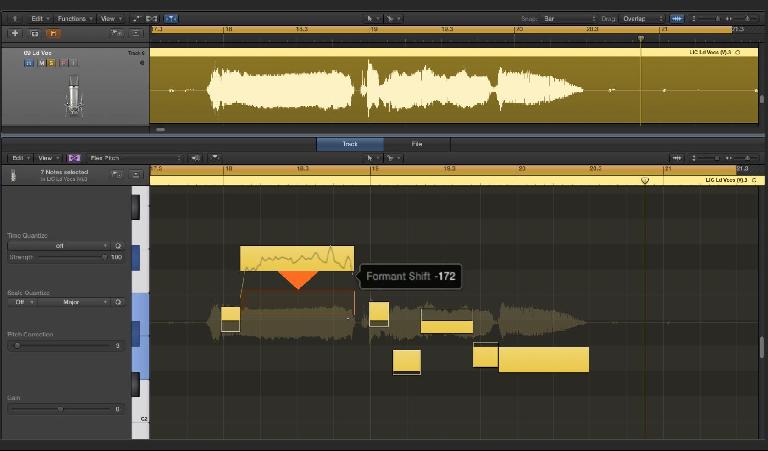 Often the best results may be achieved by a complimentary formant shift of a little less than the amount of pitch shift—so for a note transposed up three semitones, maybe shifting the formant down one or two semitones could be enough to impart a little more natural tone, while pulling it down by the same three semitones might make for a little too much tubbiness—a reverse chipmunk effect.

Ultimately, the best results may need to be dialed up by ear, and while that could get a little tedious if adjusted manually with more drastically pitch-shifted tracks, it may still be faster than, say, waiting for a singer to come back to the studio the next day just to add a couple of simple harmony lines.

Of course, besides corrective applications, formant shifts can be used creatively for special effects as well. Most pitch processors that include formant options allow for the formants to be shifted even when no pitch shift is being done, to deliberately alter the tone. With instruments, this can make for some interesting effects, like creating a watery, 50-foot piano pad sound (formants lowered), or turning that piano into a clavichord/harpsichord (formants raised), and for creative sound design formant shifting can be another very useful option in the toolbox.

With vocals, you can theoretically use formant shift to change a male voice into a female voice and vice versa, or deliberately create odd tonalities and alien voices—check out Antares’ more creative EVO pitch processing tools like Articulator, Mutator, and Throat—though again, in practice, if you’re going for a natural quality, formant-shift effects often work best comfortably nestled well down in the mix. Still, when the goal is not necessarily a natural sound, then all manner of useful creative effects can be had. 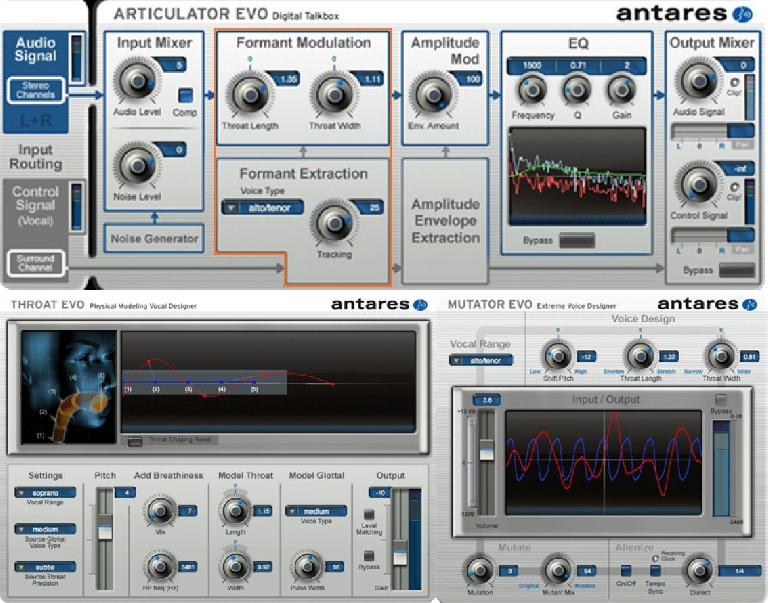 Some of Antares’ creative pitch processors

If you ever use pitch processing, it wouldn’t be a bad idea to take a little time to get familiar with any formant-shifting options your pitch-shifting software provides; likewise, if you like to indulge your creative side in the studio, experimenting with format-shift on instruments and voices might offer a few interesting ideas for special effects to alter the tonality, other than the usual studio tools.

Learn everything you need to know about vocal processing and pitch correction: https://ask.audio/academy?nleloc=category/audio/topic/vocaltuning

Dream It. Do It.
Do you want to learn VocalSynth Explained and Explored?
Yes, I want to learn!
No Thanks, I just want to read the article.
Feedback
How are we doing?
We'd love your thoughts, feedback and questions regarding our new site. All feedback is appreciated!
We do not respond to this form! If you need support, please visit our support page.
Thank you for your input!
Your message has been successfully sent
Course Advisor
Don't Know Where To Start?
Ask A Course Advisor