All Articles Recording & Production
How Audio Editors Swapped Razor Blades For Waveforms
Hollin Jones on Sat, November 17th 0 comments
If you were recording before DAWs the chances are you had to be handy with a razor blade. But why? Joe Albano explains how some techniques have changed and others remain the same.

Splicing and scrubbing audio worked very differently in the days before digital technology was commonplace. As Joe Albano explains in this short video from the course AudioPedia 107: Editing and Signal Flow, working with tape was a totally different process to sitting down at a computer and working with a mouse. But how have things evolved? Watch the 2-minute video below to find out!

Although the term "splicing" isn't used so often any more, it is essentially the same process as we carry out every day when editing in a DAW, cutting regions and clips into separate takes, loops or sections of sound for the purposes of removing errors or creating a better composited performance from the pieces of what was originally recorded.

Joe explains that splicing used to be a critical skill and the hallmark of an experienced engineer, since you pretty much only got one chance to do it right, otherwise you would damage the tape and thus the take. You had to scrub the tape manually by hand to find the exact edit point, and then physically cut the tape with a razor, then stick it back together. Some DAWs still include a scrub feature, even though we can now see our waveforms on a screen. For much more on the past, present and future of audio editing techniques and skills, watch the full course using the links below, and expand your audio editing skills. 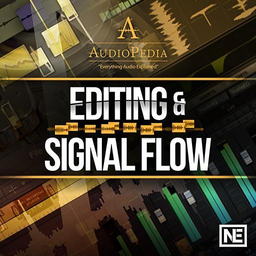