All Articles Logic Pro
How To Instantly Modulate Any Parameter In Logic Pro X
Darren Burgos on Mon, April 10th 2 comments
Modulation can be the key to making synths and even whole mixes sound more dynamic and interesting. Here's how to achieve it quickly and easily in Logic.

“Modulating” makes life interesting, and your music too! Usually done with either an LFO or an envelope, common shapes like triangles, sawtooth and square waves become tools for automatically sweeping a chosen parameter over time. This adds movement, life and depth to the sounds in your songs. New in Logic 10.3, MIDI FX Modulator can now “learn” any instrument or effect’s automatable parameters on that same channel. This works for all Logic and third party plug-ins.

Below is a quick tutorial on using Logic’s MIDI FX Modulator to instantly give movement to common things like filter cutoff and mod wheel, but also on unexpected targets like synth envelope decay, reverb/effect wet/dry, synth sine levels, or really anything you can imagine. This is done in literally seconds without having to set up complex routings within the instrument, and without using even a single point of automation too. Read on!

Step 1: Open a Retro Synth and Record a Part

Start by opening a Retro Synth. Using the default patch, record/“pencil-in” a MIDI part, like a melody or chord progression. For the article I played then edited a chord sequence (there’s a before and after sample at the end of the article). 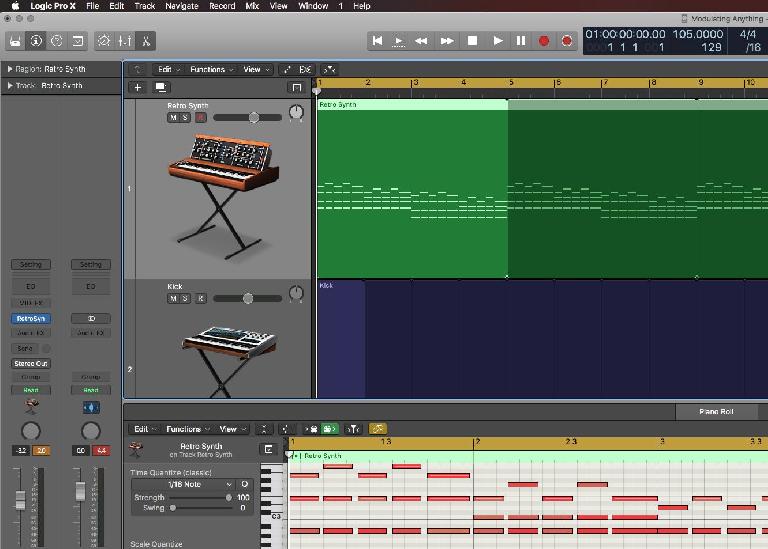 On the Track’s channel in the inspector, add the first “Modulator” by clicking the word “MIDI FX,” and a list will open where you can select it. By default, the modulator starts to send MIDI Mod Wheel data out and to the synth - Retro Synth in this case, but any third party synth like Spire, Massive, Sylenth1, etc works with Modulator too. This already makes my synth part sound better, but it’s sweeping the wheel too much. In the LFO section at the bottom, change the Output Level to 50% to lessen the effect. The rate of the sweep is also too fast so try setting it to “1/2d.” You might also try changing the “Steps per LFO Cycle” slider for a more blocky feel. Close the Modulator window and move on the next step. 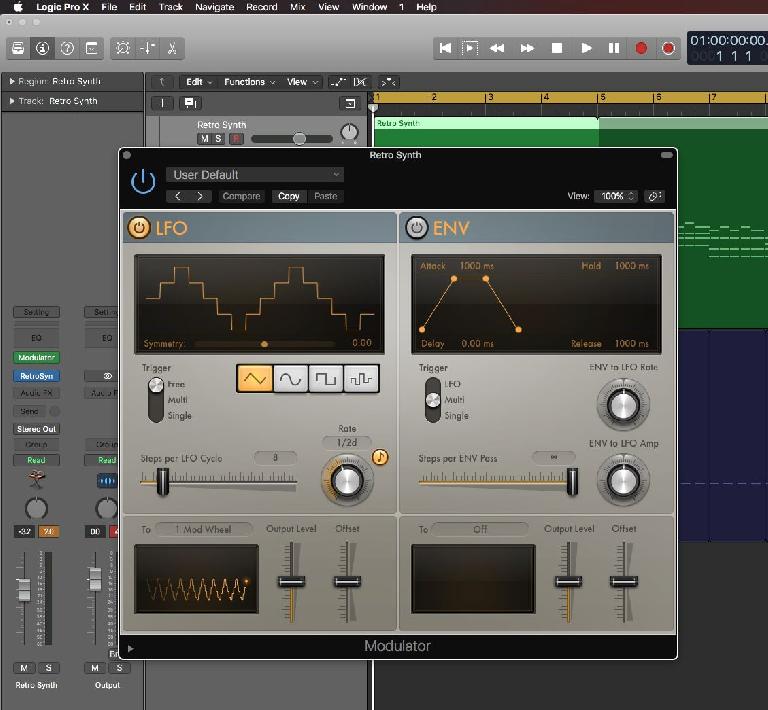 Wouldn’t it be cool if a sound could become shorter/longer as you play it automatically without actually having to play at different note lengths? Pointing directly under the first MIDI FX you added will display a bright green line, and when you see this, click to add a second Modulator. It should come up right under the first one. If you didn’t close the first Modulator, do it now so there’s no confusion as to which one you’re editing. If Retro Synth is not open, click it to open its interface and place them side by side if you can. From the Modulator’s LFO “To” menu (directly above the black square at the bottom) click and select “learn plug-in parameter” from the list. Modulator is now waiting for you to select a parameter from any other plug-in on the same channel. Click on Retro Synth’s Amp Envelope Decay/D parameter and it will instantly start to be swept by the Modulator plug-in! Also on Retro Synth’s AMP ENV try pulling back the “S” (sustain) level for a more dramatic feel. Again, because the Output Level on Modulator is set to 100% by default, the effect is a bit much at first, so pull it back to around 70%. I went with a 1/4 Rate setting and adjusted the symmetry as you can see in the image below. 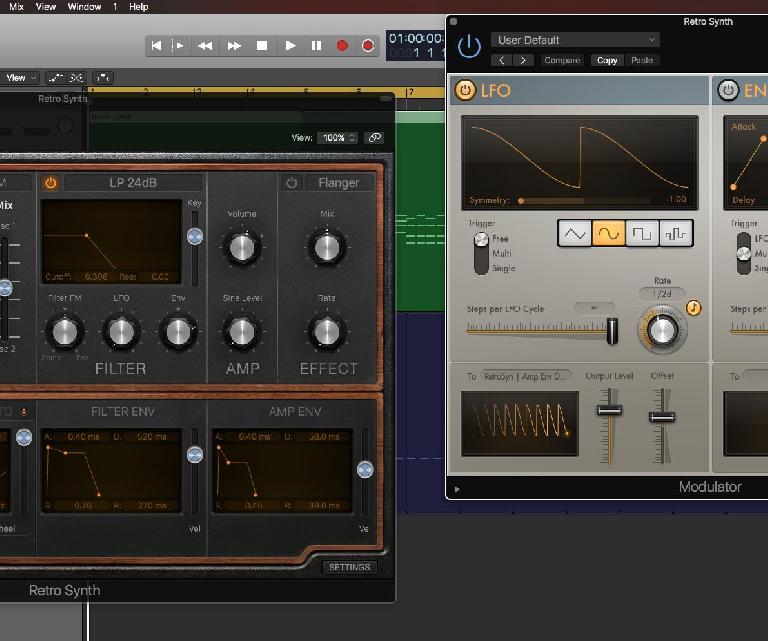 If you’ve played a lot with Retro Synth you’d know that it’s pretty easy to modulate the cutoff with its own built-in LFO by simply turning up the LFO knob in the filter section. You don’t however have control over the LFO waveform “symmetry” as you do in MIDI Modulator. Symmetry in Modulator can add a nice “swing” feel to the sweep. Add a third MIDI Modulator directly below the second one you added. Click Modulator’s “To” menu and select “learn plug-in parameter” again. Then simply click Retro Synth’s filter Cutoff parameter directly to the right of the word cutoff in the filter section.

I went with a 1/4 rate, 70% Output Level, and adjusted the symmetry to taste for a cool “pulling” or swung sort of feel. The Trigger switch allows you “restart” the LFO every time a new note is received. For highly quantized parts, try setting it to “Multi” so all notes received will restart the LFO. If your part is played more freely try using “Single” as the setting. 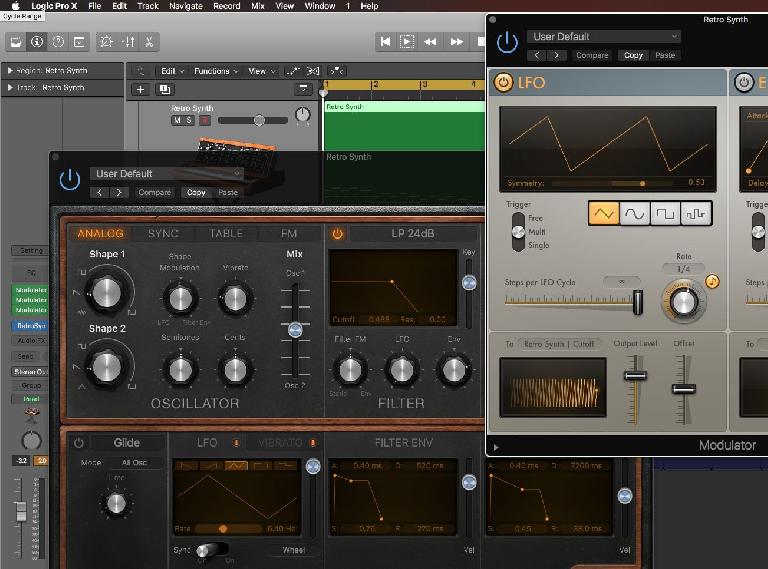 Adding reverb to only certain areas of a sequence can really liven it up and create depth. Start by choosing your favorite reverb. I’m using Eventide’s Blackhole for blasts of its epic vast sound. I’ll now add a fourth MIDI Modulator below the third. In this fourth instance of Modulator again click the “To” field and choose “learn plug-in parameter” then click the reverb’s wet/dry level. Try a slower value here like 1/2 or 1/2d. Check the image for my specific settings. 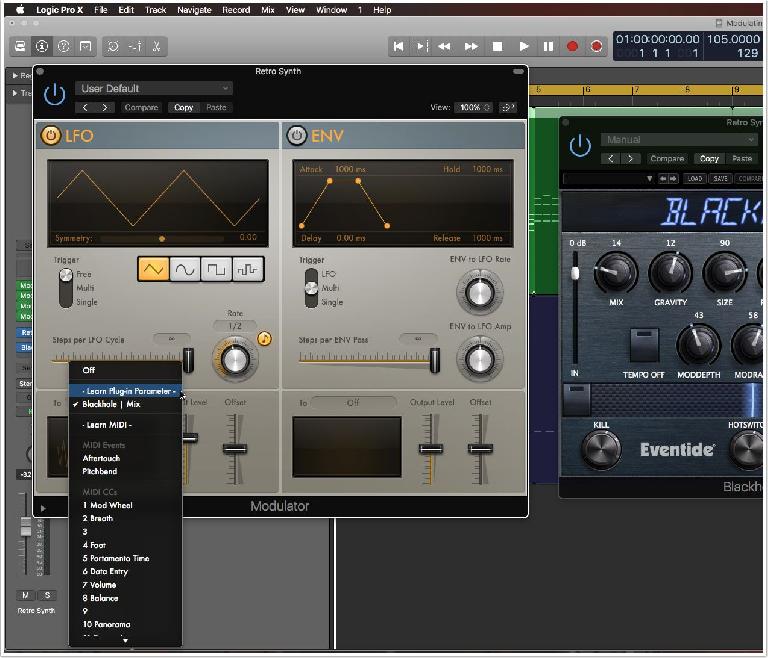 There’s another side to Modulator. It’s an envelope for adding one time sweeps at the moment you press a note. Unlike in many synths, this envelope can instantly be assigned to control whatever you want it to, not just volume. I’ll add a little more low frequency into my sound by instantly sweeping a Modulator Envelope on Retro Synth’s Sub “Sine” level. After adding a fifth Modulator under the fourth, first turn off the LFO by pressing its power button at top left, then turn on the ENV side with its power button. Click the ENV “To” menu and once again, choose “learn plug-in parameter.” Now click on Retro Synth’s “Sine Level” in the AMP section. Set Modulator’s Output Level pretty high, and the envelope shape “to taste.” 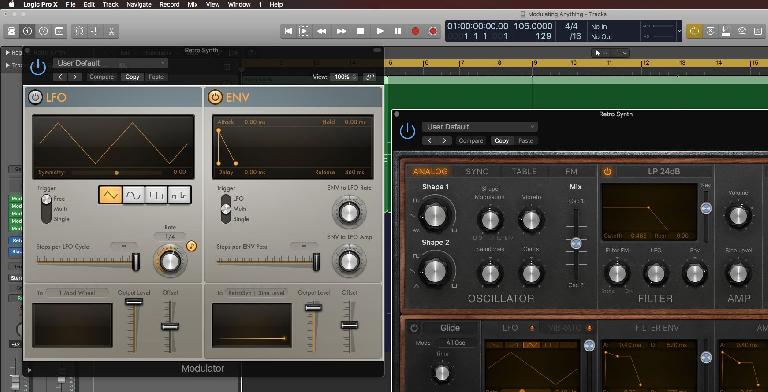 Remember too that in both the LFO and ENV sections of Modulator, there is also an “Offset” slider. Say a parameter you decide to control is being swept too far down or up, this allows you offset the value to focus the range higher or lower. Hope you enjoyed this!

First the unmodulated synth, then all 5 modulations. I added a basic kick to hear against.

Learn Logic Pro X inside out in the AskAudio Academy
Related

Darren Burgos
Darren started making music on computers when he was a teenager in 1987. His first computer was an Amiga, and when he realized the power of computer-based production, his addiction for making electronic music began. Darren switched to Mac in 1994 and started using Logic Pro. He's been involved in many music projects over the years including Psychoid. For two years Darren travelled with Apple showing Logic Pro to visitors of Macworld, NAMM, Remix Hotel and NAB. Currently, he teaches a class in L.A. on electronic music production using Logic for Logic Pro Help. Darren also runs two small businesses on Mixing, Mastering and Logic Pro training and support.
Related Videos
Comments (2)