Side-chaining is one of the subjects that I get asked about the most from students and fellow producers alike. Using side-chaining as an effective signal flow technique in the studio is very handy, and has a ton of uses besides ducking your bass with your kick.

The EVOC 20 is a vocoder built into Logic that takes an audio signal from one channel strip and uses it to drive the vocoder's synthesis engine.. The most common way that the signal is routed in Logic is to have the output of a channel strip feeding the vocoder directly. Any audio channel strip that is set up in your arrange window automatically shows up as a potential source in the EVOC 20, making for some easy vocoding. I prefer to use busses instead.

The idea of using busses to feed an EVOC 20 is to allow more than one source to feed the EVOC 20. In this case, we have a vocal and a drum beat feeding the same EVOC 20.

Step 2 - Setting Up the Sends

Now open the mixer and select the two audio channel strips. Go to the '˜Sends' section and choose Bus 1: 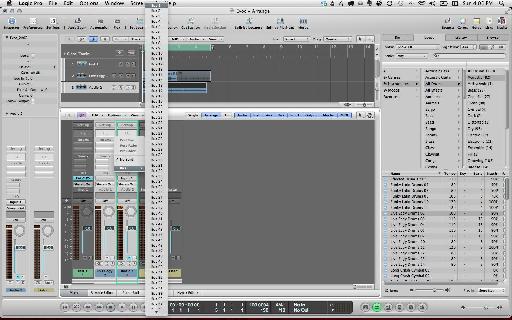 For additional control, click and hold on the sends you just created, and choose Pre-Fader. Now both audio channels are feeding the Bus, and we will have access to that bus in the EVOC 20.

Step 3 - Disabling the Auxiliary Channel Strip from Feeding the Output

What we want to do now is go over to the Aux channel that was automatically created when we assigned Bus 1, click and hold on the output slot (I/O section), and select No Output. This may seem confusing, but the bus will still feed the EVOC 20, even though the Aux channel isn't playing through the output. This way we don't hear the audio signals from the auxiliary channel strip. 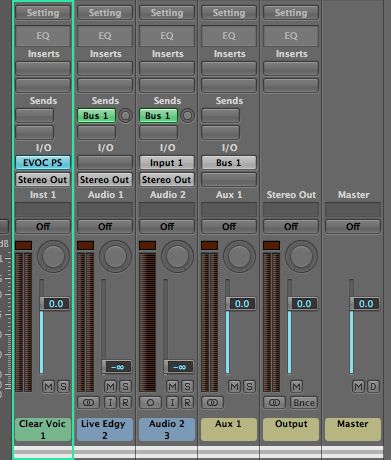 In the EVOC 20, go to the Side-chain menu in the upper right of the instrument, and choose '˜Bus 1'. Turn the sends up on the audio channel strips to 0 dB. We're almost there... 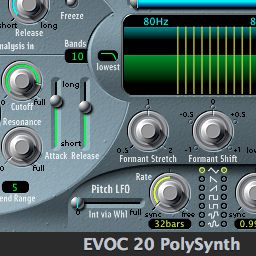 The last step is to choose a patch from the library of the EVOC 20 that is using the side-chain input for vocoding. Try Vintage Vocoder > Clear Voice Vocoder.

Vocoding in this way can add new dimensions to the vocoded signals. Adding drum loops to a vocoder can make for some interesting rhythmic stuff!

David Earl
David writes music for all media including advertising, branding, movies, television, and games. He works for such clients as Sega, LucasArts, Microsoft Game Studios, Landor and Associates, Beyond Pix, Rich Pageant, and Nextel. He also teaches at an Apple Certified training facility in San Francisco called Pyramind and has long been a resource to fellow composers, producers and studio engineers who needed help with their DAWs. A few years back he created a YouTube page that had some of his most popular tips and tricks in Logic where he provided a Logic resource for other aspiring producers, composers, and engineers. This YouTube page quickly became a source of inspiration to help the Logic Studio community at large. With over 22,000 followers on YouTube he decided (and we agreed) that it was time for the "sflogicninja" to partner with macProVideo.com to create longer format, in-depth tutorials. We are excited to welcome David to the mPV team as we continue to create the most and the best Logic tutorials on the planet!
Related Videos
Comments (0)

Dream It. Do It.
Do you want to learn Vocoding With EVOC?
Yes, I want to learn!
No Thanks, I just want to read the article.
Feedback
How are we doing?
We'd love your thoughts, feedback and questions regarding our new site. All feedback is appreciated!
We do not respond to this form! If you need support, please visit our support page.
Thank you for your input!
Your message has been successfully sent
Course Advisor
Don't Know Where To Start?
Ask A Course Advisor