Logic Pro is one of the most powerful DAWs around and the first choice of many musicians and producers for practising their art. This new course Logic Pro X 303: All Star Tips 'N Tricks contains a wealth of insider tips, tricks and techniques from some of our leading Logic experts including Steve H, Olav Basoski and Josh Carney. In this short video from the course, Josh demonstrates his favourite technique for generating random music in Logic.

Josh uses Logic's Scripter plug-in but reassures you that you won't need to do any coding to make this work! By harnessing the power of MIDI, he shows you how to use the Drum Probability Sequencer in the Keys Pad plug-in to enter multiple values for how likely any given note is to sound. Moving on to the Random Offset Probability parameter, he is able to further control the way that musical notes are generated. You'll see that this technique, which you may not have been aware of, is actually an incredibly powerful way to generate not just beats but also melodic sequences and patterns. Be sure to check out the rest of the course for lots more insider Logic tips and tricks! 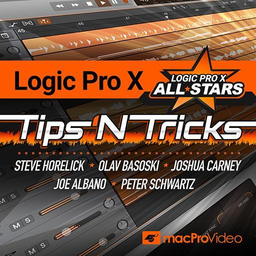 Dream It. Do It.
Do you want to learn Logic Pro All-Stars Tips 'N Tricks?
Yes, I want to learn!
No Thanks, I just want to read the article.
Feedback
How are we doing?
We'd love your thoughts, feedback and questions regarding our new site. All feedback is appreciated!
We do not respond to this form! If you need support, please visit our support page.
Thank you for your input!
Your message has been successfully sent
Course Advisor
Don't Know Where To Start?
Ask A Course Advisor