Logic Pro X comes with an extensive library of sampled instruments, loops, and convolution reverb IRs, all of which include samples that are kept on the user’s hard disk. The process of installing these assets is easy enough, but there still may be some manual effort required. Additionally, many users prefer to move these samples from their default installed locations, which can be a bit more complicated. And of course, when things are moved around, or when system updates are made or new hard disks added, things can move around enough for the samples to go missing, which may also require some user intervention to restore proper operation. This article will take a brief look at sample management in Logic Pro X.

By default, Logic puts all its Sample Library content on the startup disk, mostly within the main Library folder/Application Support folder. There’s a Logic folder, which contains subfolders that house the audio samples for Alchemy, Ultrabeat, and EXS (including all the samples for the kits in Drummer/Drum Kit Designer, which is just a skin for EXS), as well as the EXS Sampler Instruments (which include EXS front-panel and Instrument Editor settings and the keymaps that reference the individual (separate) samples). There’s also a GarageBand folder, which contains additional samples and instruments—these are for the GarageBand instruments, which also can be opened in Logic (the GarageBand instrument is really just a (simplified) skin for EXS, and those instruments can be opened (and further edited) directly in EXS when they’re used in Logic). 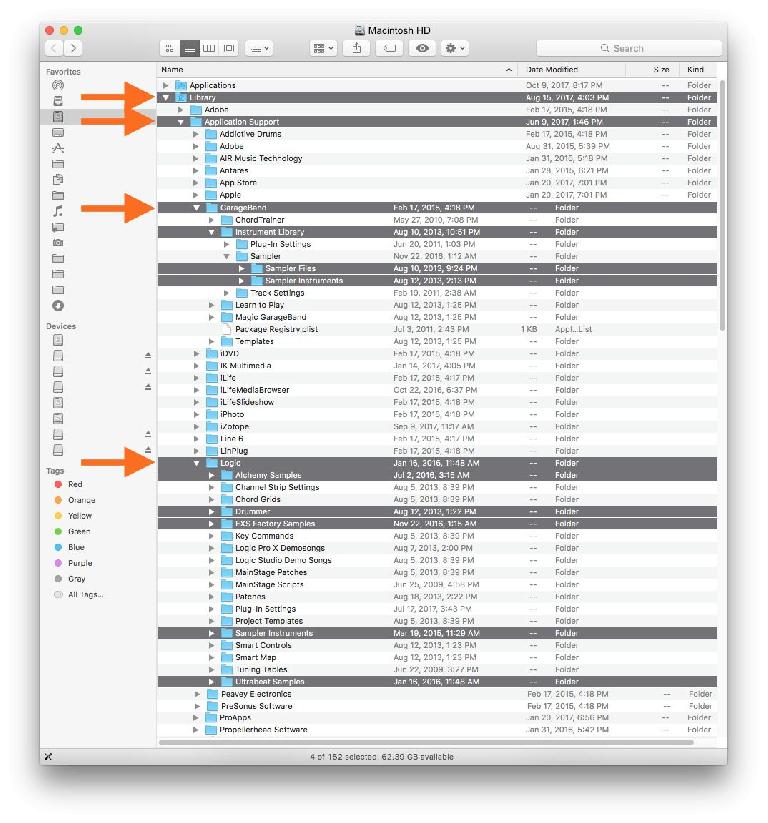 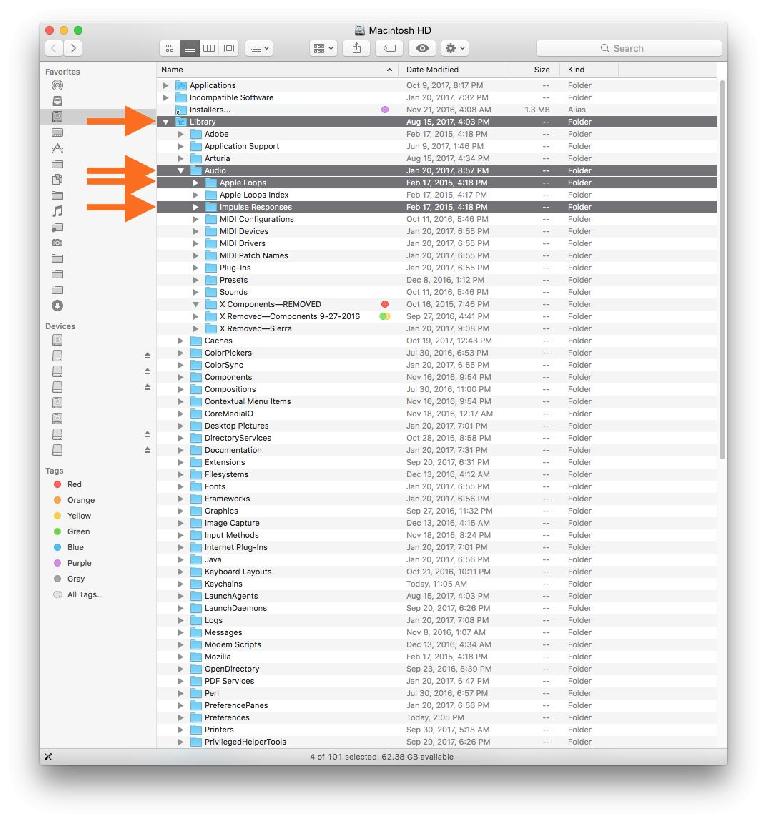 In addition to these factory sounds and samples, user-created instruments and samples may be found in the user’s home folder, at ~/Music/Audio Music Apps. Here you should find any user presets (Plug-In Settings (.pst) in Logic lingo) for EXS, Alchemy, and Ultrabeat, along with user-created Channel Strip Settings and Patches that reference those instruments and samples. There may also be a folder for user-created/third-party Impulse Responses. There’s also an EXS Sampler Instruments folder for user-created EXS Instruments (as described above), and users may choose to keep any of their own (custom) samples for those Instruments in this location as well, although they can actually be stored anywhere—more on that later. 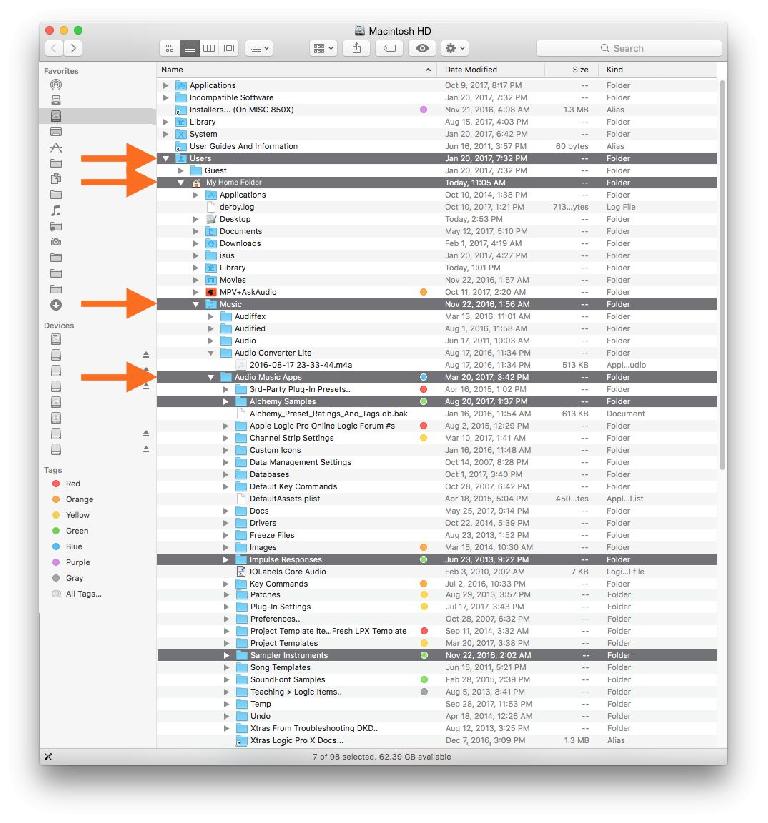 The location for user-created content is ~/Music/Audio Music Apps

All of the factory content can be installed easily from within Logic. The initial installation of the program itself necessarily includes a couple of GigaBytes of “essential content”, and the rest can be installed via the built-in Sound Library Manager. This is a centralized way to download/install all of what Logic refers to as “additional content”, although there are also other ways to access some content directly in the Logic Library pane, the Loop Browser, and the Drummer editor. The Sound Library Manager is accessed from the Logic Pro menu. 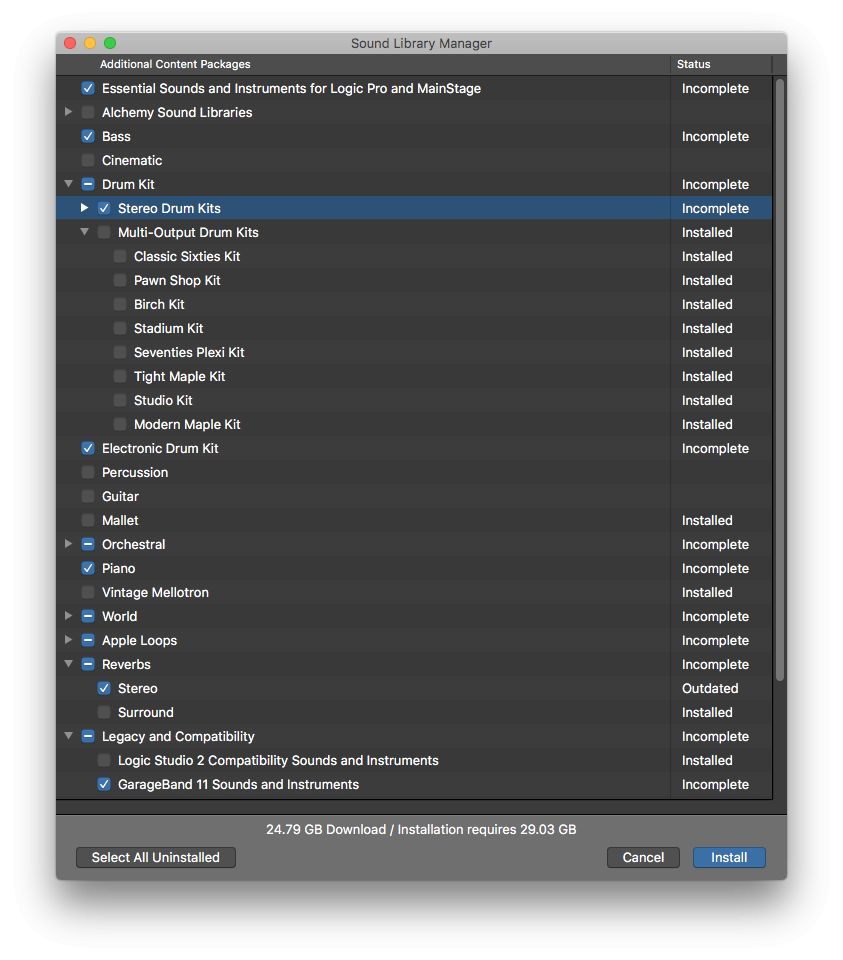 You’re presented with a simple window that lists the various instruments, loops and sounds (IRs) by category, and lets you know what’s already been downloaded and what’s new, incomplete, or as-yet uninstalled (although this is not always as clear as it could be). It’s a simple matter to either download everything at once, or (possibly better) just the specific items you’re interested in (since the library is quite large, those with less speedy connections might want to do these downloads piecemeal). Note: long-time Logic users doing a fresh install will want to be sure to include the Legacy and Compatibility content, so older instruments/patches don’t load up with missing instruments or samples.

Downloading and installing the factory content is easy and convenient, but what’s not so convenient is that—unlike most other sample library installers—Logic insists on installing the many GigaBytes of content on the startup disk. This may be fine for computers with larger (1-2TB+) or relatively empty startup disks, but it’s not so good for systems with smaller startup disks, most notably the smaller SSD drives (≤256GB) that come in so many modern Mac models.

A 256GB startup drive will fill up very quickly anyway, and all that extra Logic content may push it over the edge—even if everything fits, there may not be enough necessary free space left over (ideally ~20% of the startup volume) for the OS to perform its background tasks (caching, scratch disk use, etc). This can lead to dramatic slowdowns, making the entire computer feel sluggish to operate, and potentially impacting track counts and processing capability in Logic.

Additionally, DAWs stream both audio tracks and sample content from the disk(s) those files are stored on. The ideal DAW setup would have a physically separate disk (not a partition) for all audio files (track recordings), and another physically separate disk for all streaming sample content. While smaller projects may get by with all of that stored on and streamed from a relatively empty startup disk (especially if it’s an SSD), keeping those files separate would be the better option.

The solution is to move at least some or all of the factory content, and possibly all user content, to a separate, dedicated sample library hard disk. Even though the Logic download/installation process doesn’t provide an option for this, content can be moved after the fact, although you have to be aware of potential issues when doing this.

First off, the only content that really needs to be moved is the audio samples themselves. EXS Sampler Instruments and other preset files don’t contain actual audio, they only reference it, and so they should be small enough to be left in their default installed locations. There are two ways to move audio sample content—with Aliases or with Symbolic Links.

Aliases are pointers, created in the Finder. If you create an Alias of a folder, it will point to that folder wherever it is on any hard disk. So to move Logic sample content, you’d find the samples you want to relocate and copy the enclosing folder to the desired location (I always make sure to have a separate backup anytime I shuffle things around, though the factory content could always be re-downloaded, if necessary). Then create an Alias (Command-L) of that folder in the new location.

Then you can delete the original version of that content (in the original default installed location) and move the Alias to that spot, taking its place. Finally—and this is key—change the name of the Alias to be identical to the name of the original folder: remove the word “alias” and make sure there are no stray blank spaces at the end of the name. Now when you load an instrument that uses some of those samples, and Logic goes looking for them in the default location, it should simply follow the Alias to the new location...and Bob’s Your Uncle!

This has always worked perfectly for me, although some people seem to have problems occasionally. If it works, it’s seamless, but the drawback shows up when you decide to update the library or add new factory content. Unlike the Logic instruments that use the samples, the Sound Library Manager won’t follow the Alias—if you download new content it’ll replace the Alias with a new folder that will contain only the current material you’ve just downloaded; if this happens, all the other samples will go missing when you try to use those instruments.

If you didn’t expect that, you might go crazy trying to figure out what happened, but if you are aware of it it’s easy enough to fix. You’d just copy the newly-added samples to the preferred location (in the relocated folder along with the rest of the content you’d previously moved). Then you’d once again delete the samples and folder in the default location, make a new Alias of the folder containing all the relocated content, rename it (as above), and drop it back into the default spot—it should again work as expected, including accessing the latest samples downloaded.

If you wanted to take this approach, but didn’t want to have to deal with the hassle of reshuffling things every time you add content, there’s an alternative to using Aliases—Symbolic Links. These perform the same way Aliases do, but they work differently under the hood, and should survive incremental updates to the sample library, at least in theory (the installer should follow the Link to the relocated folder when adding new content). Again, this works for some, while some others have reported issues, but it’s a popular technique for moving library content, preferred by many users.

There are a couple of downsides to using Symbolic Links over Aliases. With an Alias, if you move the folder it’s pointing to, the Alias will still follow it to the new location—not so with a Symbolic Link (you’ll have to create a new one). And to create a Symbolic Link you’ll have to either use the Terminal or a third-party utility (like SymbolicLinker). I’m running out of room, so I won’t get into the details—a quick search for “logic library symbolic link” should turn up plenty of how-to’s and user discussions about this procedure.

Be a Logic Librarian

With all the different folders and locations for the various pieces of Logic’s “additional content”, it can be a little confusing, especially if you decide to move things around, as many people do. But armed with a little knowledge about the way it’s all managed, and the techniques for moving things around, it should be easy enough to install and customize it all for an optimal Logic setup.

Enhance and expand your Logic Pro X skills with hundreds of pro video tutorials in the AskAudio Academy here.
Related

Dream It. Do It.
Do you want to learn The EXS24: Sampling Explored?
Yes, I want to learn!
No Thanks, I just want to read the article.
Feedback
How are we doing?
We'd love your thoughts, feedback and questions regarding our new site. All feedback is appreciated!
We do not respond to this form! If you need support, please visit our support page.
Thank you for your input!
Your message has been successfully sent
Course Advisor
Don't Know Where To Start?
Ask A Course Advisor