Best of the Best

Good musicians and vocalists—especially those accustomed to studio recording—should be able to provide a solid performance from the beginning to the end of a song. However, performers are still human, even the best of them are not perfect, so inevitably small problems—clams, off-key notes, timing issues—will happen. In a live performance these go by quickly and are typically subtle enough not to distract the listener, but for a recording the standard is a little higher. Minor clams that are mostly ignored and quickly forgotten in a live show will likely become much more noticeable on repeated listening to a recorded performance, so a higher standard of “perfection” is required.

Of course, absolute perfection is not necessarily the goal, but for a recording it’s necessary to reduce any potentially distracting issues with a given performance to the level where they’ll go by unnoticed even on repeated listenings. And keep in mind, issues with a performance are not necessarily mistakes—they could be matters of interpretation or feel, or just musical inconsistency over the length of the song.

That’s where comping comes in..

It’s standard practice in the studio to record multiple alternate performances of the same song or part—these are called Takes. Besides the fact that most takes will not be note-perfect, the subtleties of the performance will usually change slightly from take to take, and having multiple takes offers the artists and producer opportunities to come up with the best performance(s) by combining the best bits of several takes into a single composite—or comp—track. This is probably most commonly done with vocals—especially lead vocals—but comping is widely used for all kinds of instrument tracks as well. Any time a track is prominent enough in the arrangement/mix for the details of the performance to be under the spotlight it’s S.O.P. to comp a final version to insure that that key parts of the musical arrangement are presented to the listener without distracting technical or musical flaws.

Nowadays comping is easy enough to do technically—the procedure is handled slightly differently in different DAWs, but it’s the same basic technique. But besides the technical editing process, there’s also an art to getting a good comp for a particular track in a particular song. I’ll talk briefly about both aspects of comping—the process of creating multiple takes and editing them into a comp, and the musical considerations for how that comp is put together.

The first part of the overall process of recording/comping a finished track is recording the individual takes for that part—I’ll use a vocal as an example, since that’s one of the most common applications for comping. Most DAWs make it simple to record multiple takes. For example, Pro Tools lets the user create a Playlist on a track, and each take recorded on that track is added to the Playlist, where they can then be viewed and edited in a display designed especially for quick and easy comping. 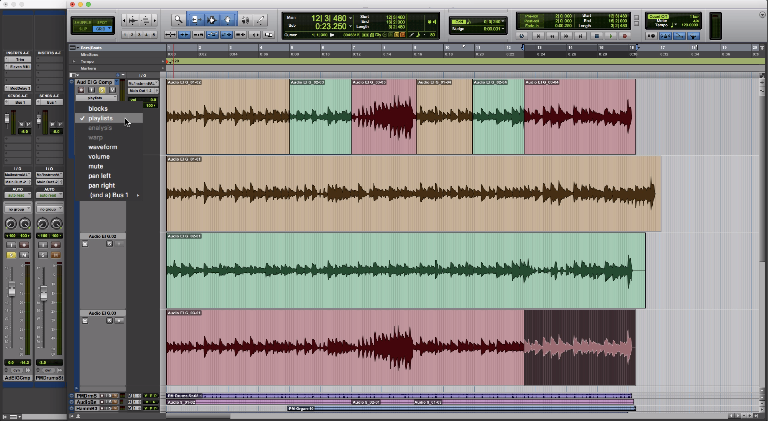 Logic offers the same thing, via Take Folders, and just about every DAW provides the equivalent. Most DAWs can also engage Loop Recording or Cycle Recording, where the song (or a specific area within the song) automatically loops repeatedly, and a new Take is created for each repeat, each one added to the playlist/take folder for that track. This allows the performer to get into a groove and keep doing takes without losing musical momentum between each take.

Whether the takes are generated all in one go via loop recording, or recorded one at a time, stopping inbetween, it's important for the engineer to keep an ear open and make sure that the sound from take to take is consistent enough for different parts of different takes to be seamlessly combined later, without tonal differences from, say, a vocalist’s inconsistent position, or a guitarist who fiddles with the knobs and changes the tone while recording the takes.

Likewise, the producer needs to keep an ear open for differences in musical interpretation that might get in the way of a successful comp. However, a performer’s interpretation will typically evolve over multiple takes—this can be an advantage as long as there are enough takes. At the same time, the producer needs to make sure that the performer doesn’t do so many takes in a row that musicality starts to suffer—or in the case of a vocalist, that the voice doesn’t start to get scratchy or otherwise change tone too much. Calling for a break periodically may be needed, making sure that the performer maintains the same mic postition when tracking resumes.

Once the takes are all in place and sitting in a dedicated playlist or take folder, then comping can begin. As I said, every DAW has its own specific implementation, but the process is always the same. The engineer/producer listens to the various takes, determining which parts of each take are the best. A new empty track is created at the top of the playlist—this will be the finished Comp track. Within a dedicated playlist/take folder track there’s usually an internal solo function to choose the take to be auditioned—when none of the take lanes/tracks are soloed then the top Comp track is the one heard in playback.

Now, one by one, sections of the best takes for various parts of the song will be selected and copied up to the Comp track. If the takes are part of a dedicated playlist or take folder, this is usually easier and quicker than having to apply the typical DAW editing process of select, separate, and option-drag to copy. For example, Pro Tools provides a button on each take lane that quickly copies the current selection in that take lane to the top Comp track. Logic makes it even easier—simply swiping to make the selection automatically copies the section to the Comp track, all in one step. 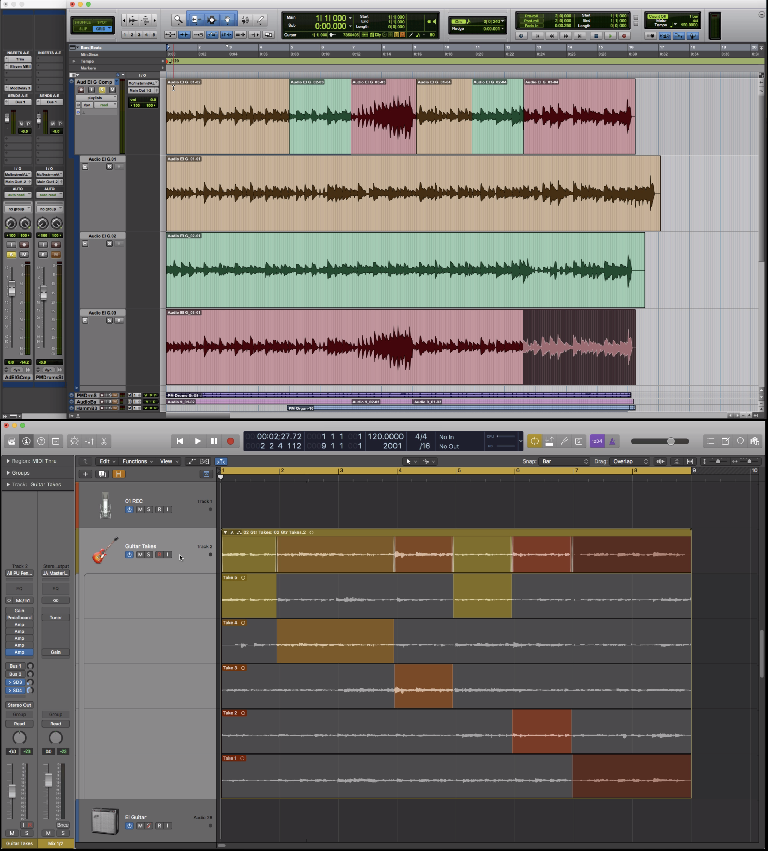 When the Comp track is done, there are usually two options. The Playlist/Track Folder can be collapsed so only the top Comp track is visible (and audible), but the takes remain in case the comp needs to be revisited. Alternatively, the Comp track can be bounced down (rendered/flattened) to a new audio track, suitable for export as a stem. Again, each DAW has its own way of presenting these options, but they should be available. 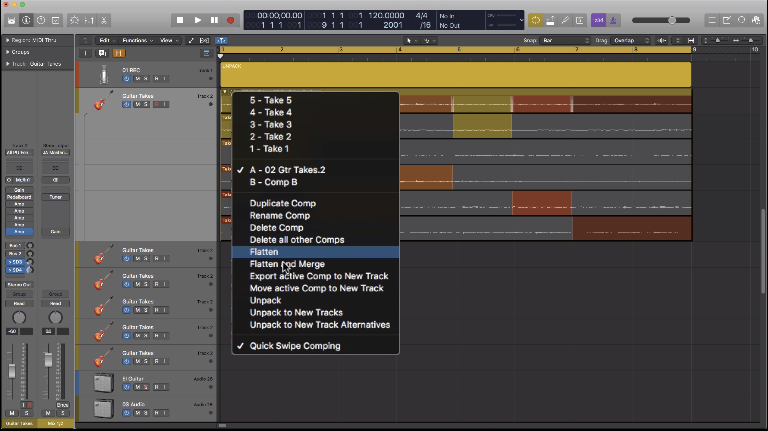 Obviously, when comping the engineer needs to keep an ear out for tonal and level consistency between comped sections, compensating when necessary with automation or other mixing tools like EQ or reverb. But besides the usual technical considerations, there are also musical considerations.

Different producers may bring a different philosophy of comping to the task. One way to approach it is to prioritize musical perfection, focusing the comp on creating a perfectly-played performance. This might be a suitable goal for something like a rhythmic track or a harmony part, and it might involve many small comped sections being pieced together. Some producers might even apply this philosophy to a lead vocal, comping takes together word-by-word, or even syllable-by-syllable!

However, many people feel that when a part is heavily comped, the quest for musical perfection can take a toll on the overall feel of the performance—this can often be the case with a lead vocal track. A vocalist’s performance across the length of a song will often have a musical “arc”—gradually building and ebbing from section to section, and from beginning to end. Heavy comping can lose that musical arc, and end up with a performance that might be more static or inconsistent, in terms of broad musical interpretation.

Those producers often prefer a more minimalist approach to comping—choose the best overall take, with the most natural, most musical performance arc, and designate that the main take for the comp. Then they’ll go through and replace just those sections here and there that could most benefit from a better version in an alternate take. Very often minor imperfections will be allowed to remain in the final Comp if their contribution to the overall musicality of the performance outweighs any subtle technical flaws. Admittedly I lean to this approach myself, at least with a good vocalist. However, when working with, say, a singer/songwriter who’s a better songwriter than a singer (to put it gently), I’ve had to turn to some pretty heaving comping to generate at least a technically adequate Comp. 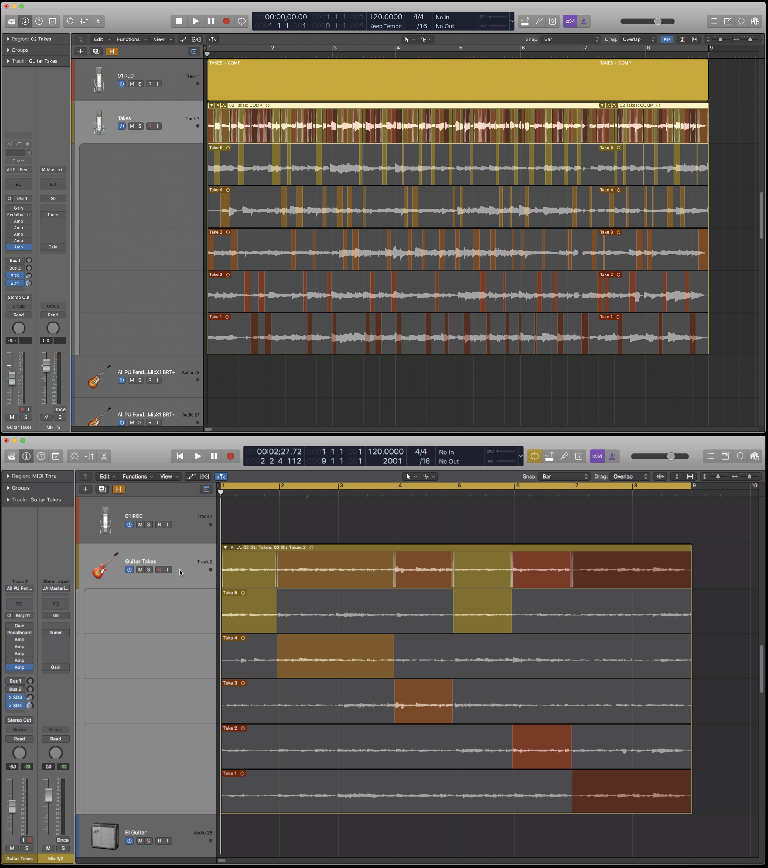 Of course, comping is not just a corrective process—it can be a creative tool. The best example is probably a musician performing an improvised solo part, like a synth, keyboard, or guitar solo. While some soloists may work out their solos and then record several takes of the same solo part, in other cases every take may be a significantly different improvised solo. In the latter scenario, comping can become more of a producer’s task than an engineer’s—the main purpose of the comp may not be to generate a technically good track but to create a new solo from different parts of the different solo takes, with the resulting final Comp being a solo that was never actually played in a single pass. Many famous solos were created this way—if a specific solo became iconic enough, often the player had to go back and learn the comped version to reproduce it in concert.

Comping is a standard part of the modern production process, and as long as the engineer or producer strikes a good balance between technical perfection and musicality, it can be a valuable tool for music production.