All Articles Music Theory & Education
Music Theory: Reading a Lead Sheet
Matt Vanacoro on Thu, March 4th 0 comments
Lead sheets aren’t just for jazz players these days! Whatever type of music you might play or produce, the lead sheet is an extremely common way to notate a piece in a small amount of space.

If you haven’t encountered a lead sheet before and are looking to decipher what’s on the page, look no further. Here’s how to make sense of this abbreviated version of traditional sheet music.

Lead sheets have measures just like traditional sheet music does, and it’s important that those measures are accurate and line up with the song structure. In fact, one of the main reasons for using a lead sheet is to abbreviate the sheet music a bit so that it fits on fewer pages - so the number of measures becomes very important as the player has to be able to count on the fact that it lines up with the actual arrangement of the tune. Good lead sheets have measure numbers making them easier to use for counting and rehearsal purposes.

Notating the chord changes is a huge part of the lead sheet, and when a musician is sketching one out quickly ‘on the job’, it’s often the only part of the lead sheet! If you’ve got a singer taking on the melody, sometimes the only thing the other musicians really need to know are the chord changes - so you’ll see people sketch one of these out in record speed during a set break at a live performance.

Sometimes a lead sheet will have slashes or rhythmic indications to let you know if a specific rhythmic pattern is really important to the arrangement. In this example, you can see that the author clearly wants quarter note accompaniment, and the slashes provide important context for what beat some of the chords actually change on. If you don’t see any rhythmic indication, you’ve likely got a bit more freedom to ‘just stay with the style’ and come up with your own accompaniment.

Melodies in lead sheets aren’t restricted to vocal parts, although vocal melodies are probably the most common thing you’ll see. Obviously, if the lead sheet is created before a performance (as opposed to hastily being scrawled on the back of a setlist or something) having the vocal melody makes it a lot easier for the instrumentalists to follow. Your singer might also want a copy of the melody, so it always makes sense to transcribe the tune’s main melody if you can.

Important riffs and melodic lines are also found on lead sheets all the time! As a sideman in a band, this example lead sheet was given to me for a tune that I didn’t need the vocal for, but I was expected to cover the melodic parts you can see as they were ‘unison lines’ that the whole band played. 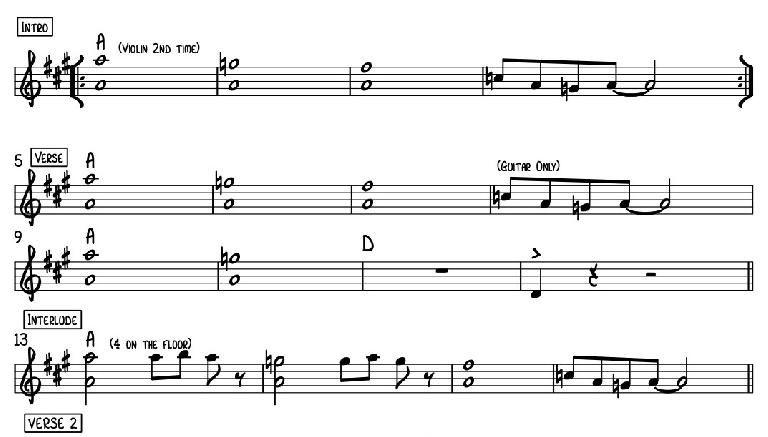 Indicating sections of the song makes it easier to follow along, and a good lead sheet breaks up the song into verses and such. Whether for rehearsal purposes or when the bandleader suddenly shouts, “He skipped a verse, go to the last one”, you’ll be glad that the lead sheet indicates where major sections of the song start and stop. If this isn’t on your lead sheet already, I highly recommend you jot it in yourself.

Lead sheets are almost always preferable to simply ‘jotting down the chords’ when you are using professional musicians. Learning to read and create this form of notation is a must for any serious musician, producer, or arranger.

Dream It. Do It.
Do you want to learn Reading Music?
Yes, I want to learn!
No Thanks, I just want to read the article.
Feedback
How are we doing?
We'd love your thoughts, feedback and questions regarding our new site. All feedback is appreciated!
We do not respond to this form! If you need support, please visit our support page.
Thank you for your input!
Your message has been successfully sent
Course Advisor
Don't Know Where To Start?
Ask A Course Advisor