All Articles Pro Tools
Pro Tools - The Mixer Demystified
Hollin Jones on Tue, November 27th 0 comments
Pro Tools doesn't have to be daunting! Check out this short video where Joe Albano explains how its mixer is laid out, how signal flows and how to customise it for your project needs.

Pro Tools is one of the world's leading DAWs and among its great strengths is its mixer, used by producers at the highest levels to create great sounding tracks - but also available to you to do the same. But where should you begin? In this short video from the course Pro Tools 104: Mixing And Automation, expert producer Joe Albano gives you a crash course in understanding Pro Tools' mixer, how it's laid out and how it fits together.

Joe begins by explaining the layout and structure of the mixer, and noting that Pro Tools often uses custom mixer layouts for each project, especially if the producer has used one of their own templates. All the channels feed to a master fader, which is where the audio and MIDI tracks are routed and printed when you perform a stereo mixdown.

There are several types of channel strips in Pro Tools - audio and MIDI / instrument channels which will be mono or stereo, or sometimes multichannel. You'll see how to quickly create a new mixer panel, adding multiple track types and then moving these tracks around to customise the view, hiding and showing tracks and making them inactive when not required. When you move on to the other videos in this course you will learn much more about how to automate and mix in Pro Tools to get great results - so check it out today. 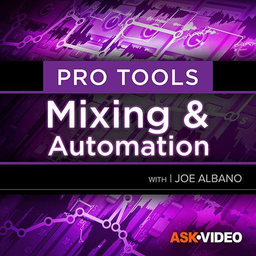