All Articles Review
Review: Cableguys MidiShaper
G.W. Childs IV on Thu, October 6th 0 comments
Language
G.W. Childs finds out if MIDIShaper really adds versatile and powerful modulation to your tracks like Cableguys promise it does. Spoiler alert: It does.

Modulation sources are always a welcome addition to any session. Especially high quality, versatile modulation sources that allow a variety of different patterns, shapes and resolutions. In this review, I’d like to go over an extremely powerful modulation source for any DAW, called MidiShaper, from Cableguys.

I have to tell you, with the demo that I saw, originally for MidiShaper, I have been very excited to finally get my hands on it and rock out. One of the reasons I was so excited in the first place is due to having already worked with other Cableguys plugins in the past, like Volumeshaper 4—an audio effect with very similar modulation possibilities. MidiShaper only sends MIDI over to other plugin instruments and effects, or even hardware devices. You get up to 4 modulation sources that you can route to specific CC destinations on either your audio effect, or synth, as long as they have MIDI learn, or a way to assign specific CC numbers to a knob, within the plug-in in question. 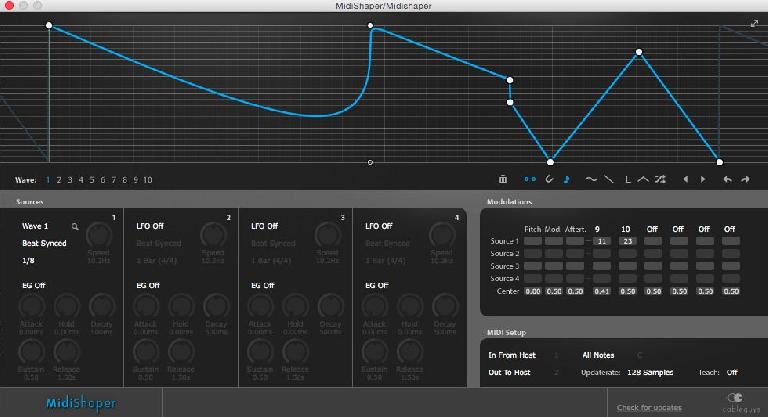 Routing can be a little tricky at first. Thankfully, Cableguys supply examples for multiple routing situations for each major DAW supported. I used Ableton for my foray into MIDI-shaping, and once I got the hang of it, I couldn’t stop setting up a second track for MidiShaper every synth in my session that I felt could use some over the top modulation.

The Four LFOs, also paired with Envelope Generators, really do allow some incredible, precise modulation. Though it’s easy to confuse the MIDI learn and accidentally assign CCs to the wrong knob (if you’re using all four at once for one effect or synth), Cableguys gave an easy way to overcome this predicament: Teach.

When Teach is on, you can restrict MIDI output to only one CC at a time, making it easy for other plug-ins to MIDI learn, from MidiShaper 4.

On some DAWs, it’s possible to modulate even faders, knobs and other functions within your DAW. In my case, by enabling the Remote on Ableton Live’s IAC driver Input, I can use Live’s own MIDI learn to assign modulation to volume faders, pan pots, even loop trigger buttons. This is where MidiShaper just started to blow my mind. Especially, when the design interface is so easy. You can generate a sine, or triangle with a button press. Or you can set the LFO resolution all the way up to a bar (capable of 32 bars) and make custom patterns of your own. The latter made particularly easy by useful draw modes like Active steps drawing, and Randomize.

I really love MidiShaper and plan on using it for a long time. It’s like a modulation toolbox with four awesome LFO/EGs, 10x slots for additional waveshapes of your own. And it’s even possible to cross modulate up to four modulation sources at once, going over one CC. Straight up wizardry is what can occur. But it’s not for the faint of heart. Though there is a little bit of a learning curve, if you like modulating everything, it’s totally worth it!

Pros: A slick, well thought out, multi-modulation source plug with a great look, and an awesome user interface. Great setup instructions for all DAWs.

Cons: Can be a little tricky to set up.