Sample Logic's Cinematic Guitars Infinity is a lot more than a collection of samples, it’s an engine and a massive library that contains years of design, creation, and categorization. Cinemorphx builds on the CGI engine and uses common interface elements of CGI to provide a library of ambient and aggressive atmospheres for film composers.

Pegged squarely in the middle is the new Cinematic Guitars Organic Atmospheres library. It’s almost as if CGI and Cinemorphx had a baby, and that baby grew up to be an 850-preset sonic monster. Imagine the source material and power of the CGI library but with the focus and direction of Cinemorphx and you’ve got something close to CG Organic Atmospheres. It’s a pretty incredible library of sounds and I was very excited to dissect it.

It’s almost as if CGI and Cinemorphx had a baby, and that baby grew up to be an 850-preset sonic monster.

If you’re not familiar with the Samplelogic/CG engine, here’s a quick review. A sound is made up of four fundamental ‘cores’. Each core contains a sound source which you can leave or replace from the massive list of sources. The cores themselves can be configured, processed, controlled with the modwheel, and even altered automatically with a step sequencer of sorts. You can save a core’s configuration, and even browse through a library of preset cores. Still with me? So a preset might have 4 cores, each with a sound source, you can swap the sources, load up preset core configurations, and save all of that into one big file—the patch. 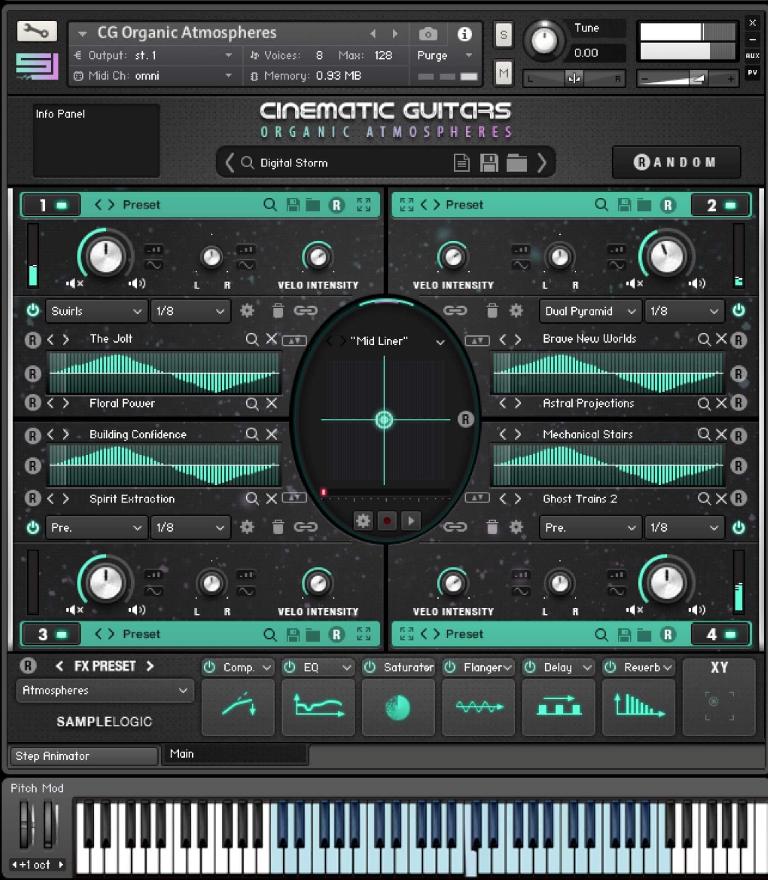 My favorite part of this paradigm has always been that it offers inspiration for just about any type of workflow. You can get deep down into the nitty-gritty and load up individual sound sources and create a core configuration from scratch, or you can load up preset cores, or you can simply load up preset patches and stick with that. You can dive as deep as you want, or stay as inside the box as you want. It helps a lot as it removes a lot of ‘roadblocks’ to creativity to have these options. Feel like diving down the rabbit hole? Dive away. Need to find inspiration quickly? Simply browse the presets.

There are six categories of instruments to choose from when browsing the preset patches, and I think it’s worth drilling down into each category to see what CGOA comes with. After all, a great many of you will want to use this instrument ‘right out of the box’ to create atmospheres and full on film cues. It’s important to know how realistic this is.

Feel like diving down the rabbit hole? Dive away. Need to find inspiration quickly? Simply browse the presets. 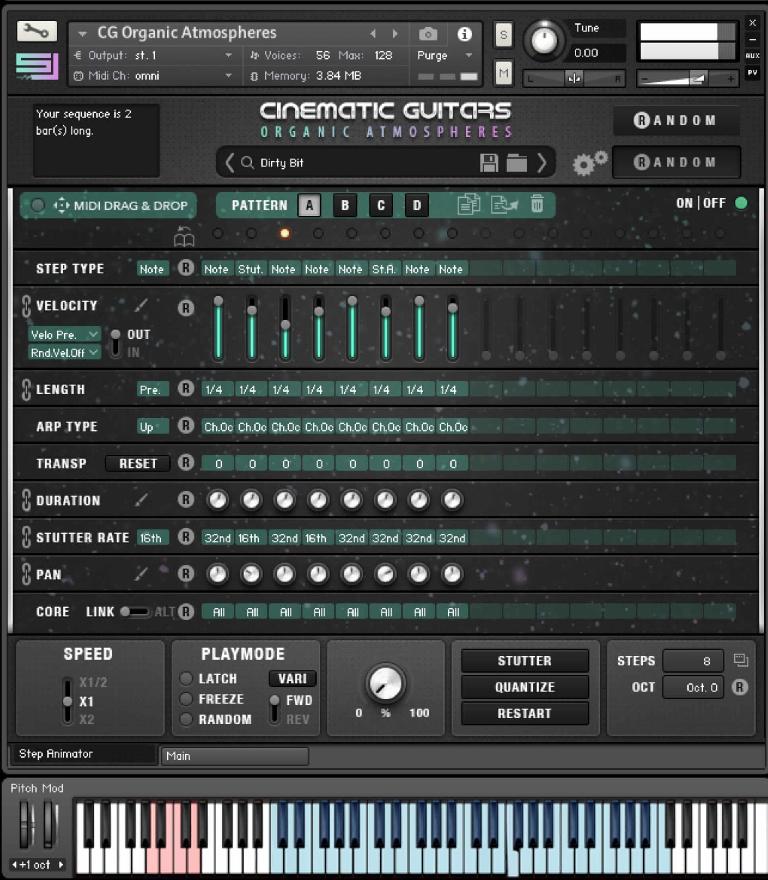 The first category is ‘bizarre’, and boy do they mean it. The FX engine is almost pushed to the limit on every patch in this category. I browsed through some of the presets and found them to live up to the name. This category is great for any foreboding cues you may have to create, and you can hear that even with a few notes (literally, just two!) you can make a lush soundscape that evokes the stuff of nightmares. It’s hard to keep in mind that the source material is all guitar-based!

The next category is ‘dark and mysterious’ and if you thought bizarre was a little scary, you haven’t heard anything yet! I discovered that these patches tended to have a bit more pitched elements to them, so a little less ‘sound design’ based and a little more musical, but man… still scary as heck! Just for fun, I left the exact same notes in the source MIDI track. Check out how different it sounds with a simple patch change!

‘Electronic and Effectual’ was up next, and just in time—things were getting dark around here! This category had quite a few more ‘inspirational’ and brighter patches, and I was quite happy to discover this. The library started getting quite diverse from here on out. The example patch, ‘peaceful scenery’ definitely lived up to its name. Again, all I’m hitting are ‘roots’ here. Single notes are generating these entire lush soundscapes. Pretty cool!

Next up on the list is the ‘Mixed Emotions’ category. I was conflicted about how to feel about this (a little sound design geek humor right there), but the concept became apparent after listening to the first patch. I pulled up ‘Enchantment District’ and could immediately sense a sonic landscape that started to get bright… then took a dark turn. This category is home to some clever sound design indeed.

When I saw the ‘Stingers’ category, I immediately made an association with the GarageBand loop category of the same name. As it turns out, they definitely share a similar function. Holding down a single note (as I did in the example) of a ‘Stingers’ patch will generate quite a long bit of music! It’s nearly a self-contained piece on a single note. 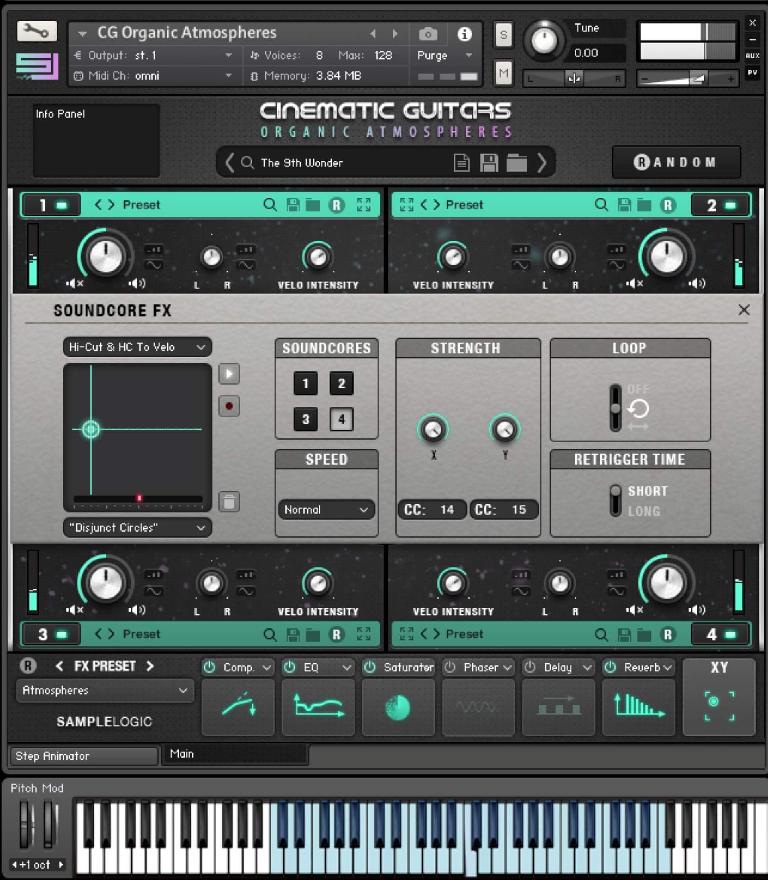 The last category turned out to be my favorite! ‘World Organic’ is the bank of patches I’d use pretty much daily if I were a composer for documentaries, Disney parks, and presentations of all kinds. It was a great mixture of electronica and acoustic samples and felt the most musical to ‘play’. Although most of the sounds in this library are meant to be used specifically for sound design and score generating purposes, this category felt the most melodic to me.

‘World Organic’ is the bank of patches I’d use pretty much daily if I were a composer for documentaries, Disney parks, and presentations.

CG Organic Atmospheres is a fairly specific tool. If you find yourself creating film cues on a quick turnaround (or at least you wish your turnaround was quicker!), you really can’t go wrong here. This collection definitely has a ‘sound’, and the staggering number of presets and customization options more than provide great value for your money.

Cons: None, really. If you’re in need of this type of tool, you’ll love it.