All Articles Review
Review: Heavyocity Scoring Guitars 2
Matt Vanacoro on Mon, April 2nd 0 comments
Heavyocity have expanded upon what the original Scoring Guitars Gravity Pack brought us with version 2 which for $99 will add another feather to your cinematic cap.

Heavyocity is still doing some really wild things with the Gravity Engine for Kontakt, and Scoring Guitars 2 is the latest example of how far they can push it. This collection of cinematic-slanted guitar instruments, phrases, and samples is diverse and highly configurable. I spent a few days with it to see what makes it tick.

What’s It All About 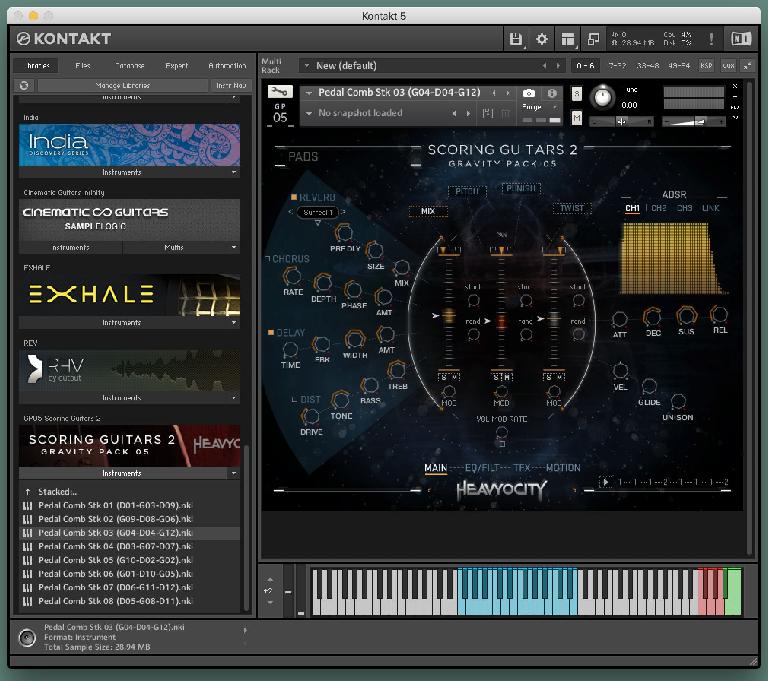 Scoring Guitar 2 is a Kontakt Library that contains a huge palette of sounds all based on guitars, and all pushed through the Gravity engine. It doesn't require Gravity which is great if you don't have it yet and it's NKS compatible. There is a large selection of sonic material that ranges from short and funky guitar ‘loop’ type phrases all the way to playable soundscapes and beds. The samples are generally recorded about a 4th apart, so the audio engine pitches it as the user desires with a key switch.

When you load up SG2, you’ve got a selection of subfolders to browse to find a preset. These include Melodic Pulses and Phrases, Ambient Beds and Drones, Pads, Performance Palettes, Rhythmic Pedals, and Xtra Playables. If you want to use SG2 to trigger pre-played phrases that are tempo-synced and live on their own, you can do that. If you’d rather use SG2 to play sounds like a traditional virtual instrument, that’s an option as well. 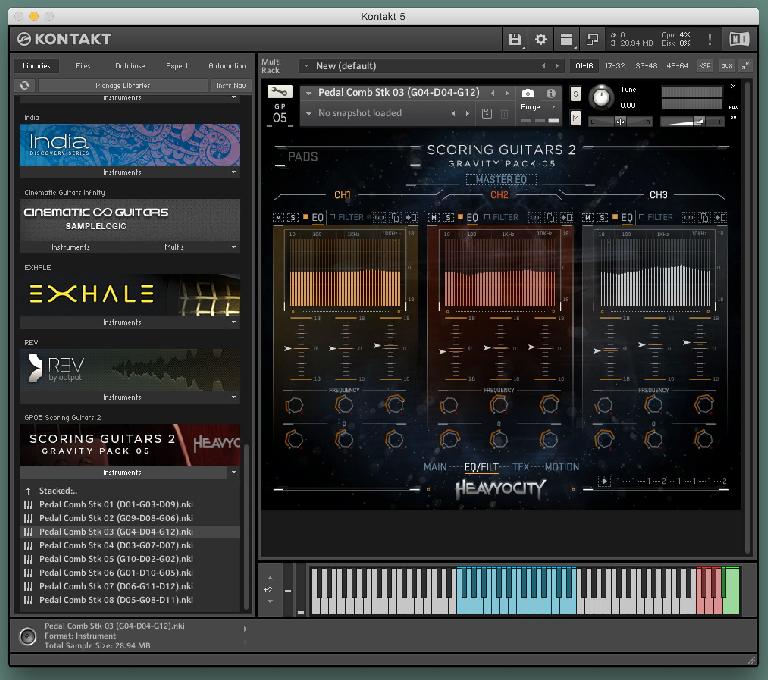 The main page puts a lot of control over the sound at your fingertips. Although there is a separate FX page, you can dig down into some of the more basic fundamental effects like reverb, chorus, delay, and distortion right on the front page. There are up to three elements that can make a sound, and you can adjust the amplitude envelope independently for each one, or link them together for convenience.

You can also adjust the volume, pan, modulation, and start time of each sample element right from the front page. I found this to be a really simple way to quickly alter the character of a patch. The ‘punish’ and ‘twist’ controls are present from other Gravity-based instruments, and they work as expected to add in some dynamic ‘pressure’ to your sound.

On The Same Page 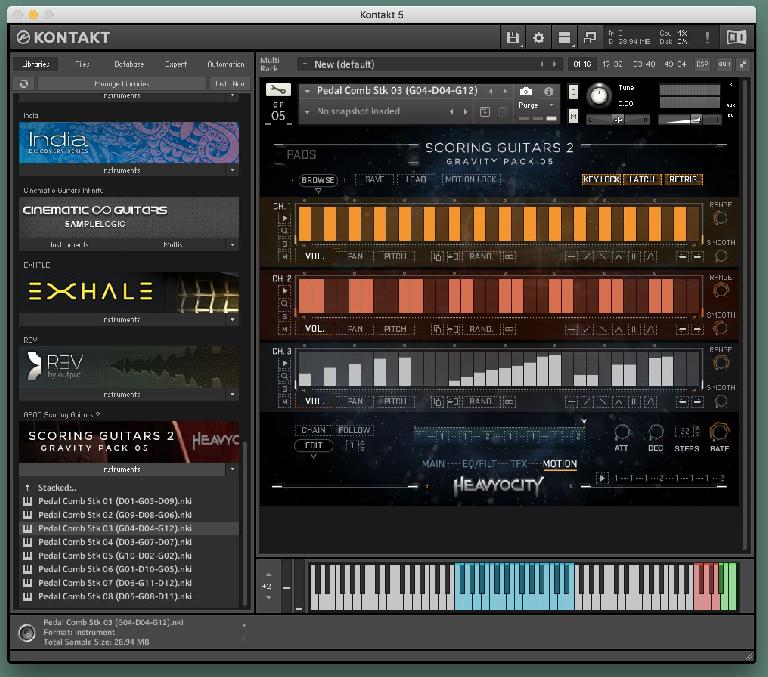 There are four pages in SG2 - Main, EQ/Filter, TFX, and Motion. The EQ page contains a three-band graphic EQ for each layer, as well as a selectable filter. The TFX page contains some basic effects that are triggerable with keyswitches (as is the motion). The motion page is where things really get, well, moving! You’ve got a large motion sequencer that is assignable to volume, pan, or pitch for each layer independently. There are plenty of motion presets, and many of the patches make good use of the motion to craft sounds that are complex and evolving.

When a Plan Comes Together

It’s the sum of all of these parts that really brings SG2 together into the diverse instrument that it is. The patches range from rocking riffs where the guitar is clear and present to patches that are sonically twisted to the point where it sounds like an analog synth.

The common thread however is motion, evolution, and drama. Scoring Guitars 2 is expertly designed for cinematic use and it is in that realm that it shines. At only $99, this one is kind of a no-brainer.

Pros: Excellent use and expansion of the Gravity engine, a diverse sound set without a lot of ‘repetition’ between patches, loads of sonic possibilities, patches range from rocking riffs to spacey synth sounds, many of the sounds range on the longer side which is nice for film cue work. Doesn't require purchase of Gravity.

Cons: Some patches are a little heavy on the reverb/ambiance, but you can pull that back easily.