All Articles Review
Review: Imaginando K7D Tape Delay
Hollin Jones on Fri, May 10th 0 comments
Imaginando's latest vintage delay plug-in for desktop and iOS is seriously affordable and brings a touch of retro to your productions. Hollin Jones put it to the test...

We have been fans of Imaginando since the company first developed LK and TKFX, Live and Traktor controllers for iOS, several years ago. Since then it has gone from strength to strength and branched out into developing desktop as well as iOS software for musicians and producers. Its latest release is K7D, a vintage tape delay plugin for Mac, PC and in Audio Units format for iOS. 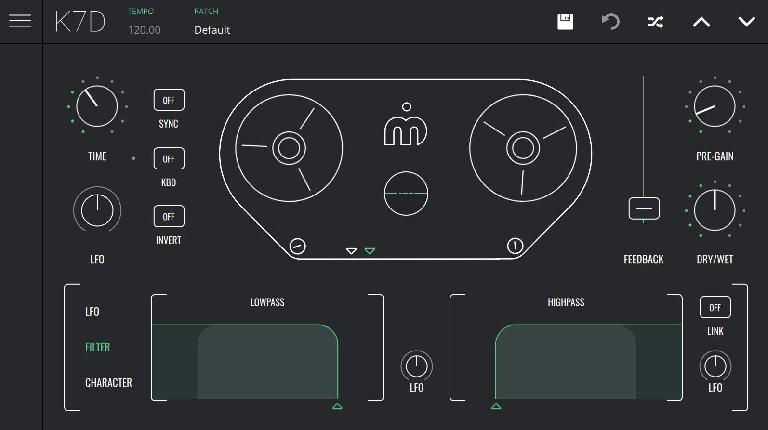 Some developers either model a specific hardware delay unit, or graphically simulate the look and feel of vintage delay pedals. That’s fine, but I also liked Imaginando’s approach here of stripping everything right back to a slick and simple feel. It’s a lightweight download and quick to authorise online - in all major desktop formats. The desktop license allows up to 5 computers to be authorised which is very generous, and the iOS version (which costs just 3.50 EUR) authorises across all iOS devices signed in with your Apple ID.

The interface is clean and easy to follow, with a toolbar across the top giving access to presets, undo, patch up/down and a handy randomise control that dials in new settings each time it is pressed. To the left is the all-important Time control as well as Sync, to determine the delay’s behaviour. Below this is a contextual section that can be used to access LFO, Filter and Character parameters, each with its own set of controls. To the right is a feedback slider, dry / wet controls and a preamp knob. 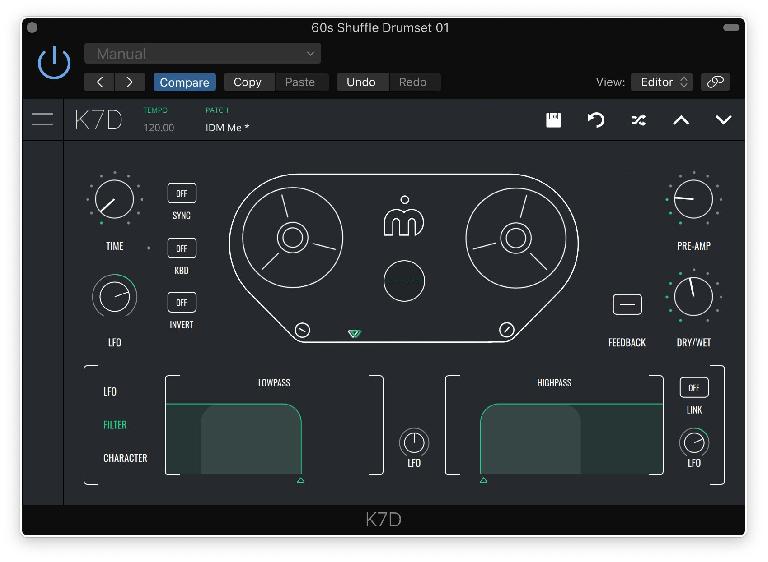 The presets are great, ranging from subtle delay to crazy ping pong feedback and everything in between. Delay time can be set from 1ms to 1 second, and the team has done an amazing job of accurately modelling analog tape delay with noise, tape distortion and mechanical vibration all factored in. The crunch of the distortion is particularly pleasing and it seems to excel at dub-style effects, as you might hope.

Assigning LFO and selecting different waveforms feels like a creative way to play with the effect produced, and there are high and low pass filters on the feedback path making it possible to shape your sound internally. Normal and ping pong modes are available, and you can even modulate delay time via incoming MIDI notes.

K7D sounds great and is perfect for everything from subtle delays, space and warmth right up to insane psychedelic and dub effects. It’s very attractively priced and has a gentle learning curve that definitely doesn’t blind you with science. To my ears it definitely sounded warmer and more analog in style than a lot of the software echo FX out there, and it’s undoubtedly less money than a lot of competitors. As someone who uses echo a lot, K7D will certainly be featuring in my productions from now on. A fully working demo is available.

Pros: Sounds great. Warm, authentic and analog character. All kinds of echo effects are easy to achieve. Very affordable. 5 computers per license. Easy to use.