All Articles Review
Review: Isotonik Studios FactorSynth For Ableton Live
G.W. Childs IV on Fri, August 3rd 0 comments
Using machine learning to analyse loops and let you reinterpret and rearrange them in very advanced ways, FactorSynth is something special. G.W Childs put it to the test.

Sounds designers, DJs, producers and remix artist are always looking for new tools for mangling and reinterpreting source audio. Isotonik has recently produced just such a tool known as FactorSynth, a Max Effect/instrument for Ableton Live 9/10 that uses machine learning to decompose sounds into sets of elements that can be reused and mangled in some very exciting ways.

Loop In, Loop Out

After you load the FactorSynth Max patch into an audio track, you only need supply a couple of audio loops on the same track as FactorSynth to get things rolling. Once you’ve dragged one of the audio clips in your track in to FactorSynth, you can press the Factorize button corresponding to either FactorSynth’s own Master clip slot, or the X-Syn clips slot. After the progress loop finishes and the Temporal Elements Master is populated with the individual elements of the analyzed beats you begin to hear very quickly what FactorSynth is capable of. 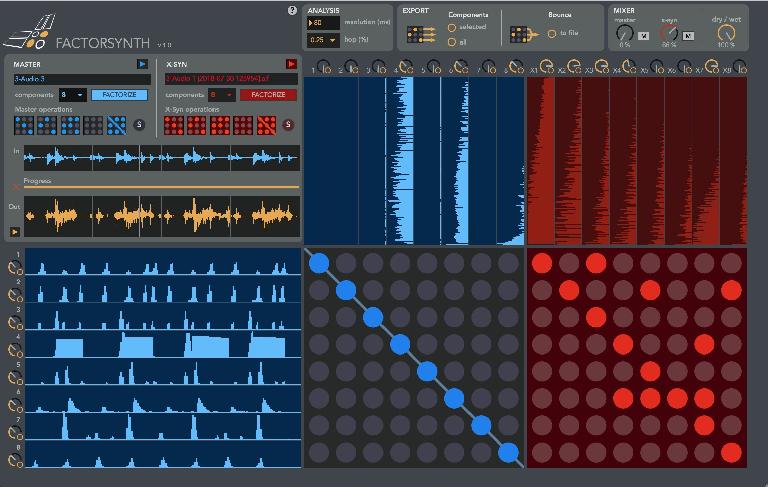 I used a basic 16 beat drum loop for the Master clip slot in FactorSynth and a basic pluck melody just try get my feet wet. Nothing too fancy! What I got back was something very different, almost ghostly. But also a rocking remix from what I initially came in with. When you Factorize a sound, your loops are converted into two types of elements - Temporal and Spectral. When you modify the Temporal Elements, you are technically altering the amplitude envelope of several broken down pieces within a loop. You are even able to draw over the waveforms displayed, dramatically altering the playback characteristics of your original loop.

Here’s after:
You connect the Spectral and Timbral elements by using the Switchboards, which act like step sequencers that play back elements at a time of the loops you’ve added to FactorSynth. In fact, you can use the Switchboards to create entirely new patterns of your own, or use the Switchboard pattern buttons to drop in some basic ones just to get things started.

In addition to creating new patterns from old in a very cool, spectral way, FactorSynth is capable of exporting audio factorized in FactorSynth as one loop with Bounce, or you can have FactorSynth break down the loop entirely into multiple audio tracks with a Component Export. I don’t know of anything else that does this, and let me tell you, it’s very handy if you’re making audio loops of your own for profit or for fun. One loop brought in to FactorSynth can create several ‘sub-loops’.

FactorSynth is an amazing way to destroy and repurpose loops that aren’t currently cutting it for you. And it’s also a wonderful tool for remixing melodies, as you are able to creatively rearrange things with the Switchboards in ways that completely change the original work. This is definitely a tool that you’ll find yourself coming to when you’re working with a track that’s leaving you scratching your head on ‘where to go next’. If you’re looking for some secret sauce in your new productions, FactorSynth might be a good plug-in to have a look at.

Pros: A powerful instrument for breaking down audio loops in to Timbral and Spectral elements that can be remixed and exported in astoundingly cool ways.

Cons: There is some waiting on the progress bar when Factorizing loops. Takes a little getting used to in terms of workflow.

Dream It. Do It.
Do you want to learn Take an exclusive look at the newest features as Ableton 10!?
Yes, I want to learn!
No Thanks, I just want to read the article.
Feedback
How are we doing?
We'd love your thoughts, feedback and questions regarding our new site. All feedback is appreciated!
We do not respond to this form! If you need support, please visit our support page.
Thank you for your input!
Your message has been successfully sent
Course Advisor
Don't Know Where To Start?
Ask A Course Advisor