All Articles Review
Review: McDSP Channel G Dynamics
Rishabh Rajan on Wed, January 23rd 0 comments
Language
McDSP's critically acclaimed plug-ins have caught the eye and ear of many producers. Rishabh Rajan is no exception and puts the Channel G dynamics effects through their paces in this review. 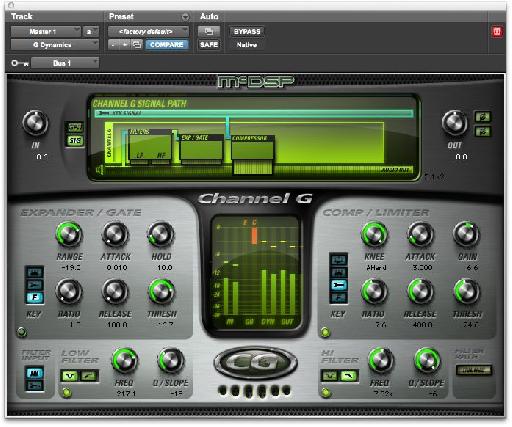 The signal flow can be viewed by clicking on the '˜SIG' switch on the top-left part of the interface. Each of the three processors (filter, expander/gate, compressor/limiter) can receive input from multiple sources indicated by the '˜KEY' switch control in the lower part of the interface, though for the filter it's called '˜FILTER INPUT'. Key is more of a dynamics processor term so it makes sense not to call it that for the filter. Changing the input on each processor will be visually indicated in this area.

The four main sources available for each processor are:

In the feedforward mode, the VCA control voltage (the voltage that detects if the signal needs to be compressed or not) is taken at the input or the source. In feedback mode the control voltage is taken at the output. So in a way, the signal has already passed the VCA before it gets compressed. This results in a smoother, more musical compression versus the more accurate but harder compression with the feedforward design.

When the feedback mode is enabled, it is also graphically represented in the Signal Path view.

The low and high cut filter occupy the lower part of the interface. Both the filters have the usual frequency & slope controls. The frequency is fully sweepable in the range of 20 Hz - 20 kHz. The slope knob works as a Q control when the filter is set to a notch filter. Each filter also has its own individual ON/OFF switch indicated by the small green LED next to it, which is also seen on the other two processors. You can see the effect of the filter in the graph which can be enabled by clicking on '˜GPH' at the top left part of the interface.

The filters can be applied on the audio signal and sent to the output, though to do this, in the FILTER PATH, the '˜INLINE' switch should be enabled.

There is no dedicated switch for the two modes of this processor but the expander or gate functionality will depend on the Ratio and Range parameters. A ratio of 1 will have no effect on the audio, while any ratio higher than that will work as an expander or a gate. Generally if the audio is completely attenuated, the processor is a gate while if the audio is not completely attenuated, it is working as an expander. This can completely depend on the program material, but I've noticed a ratio of 30:1 or higher sounds like a gate.

The RANGE defines the amount of attenuation. So a setting of 0 dB will have no effect on the audio and anything lower will attenuate the sound, assuming the sound has dropped below the THRESHOLD value. For subtle expansion, use a value of negative 30-40 dB, anything lower will start to sound more like a gate. At the lowest value of -80 dB, you will get a hard gated type sound, assuming the ratio is set relatively high.

The ATTACK defines the onset time of the effect while the RELEASE parameter controls the time it takes to return back to unprocessed levels. The HOLD parameter can keep the effect on for a little while longer even if the signal has crossed the THRESHOLD. This can be helpful to avoid the zipper noise effect caused by using really fast attack and release times.

The effect is also visualized in the input/output transfer function graph which can be accessed by clicking on the '˜GPH' switch. 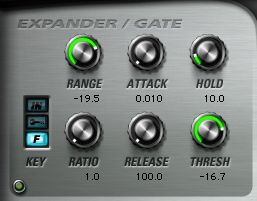 Just like the Expander/Gate, this processor doesn't have exclusive controls for the two modes. Primarily, the ratio will define whether its running as a compressor or a limiter. Generally speaking, anything over 20:1 is considered limiting. Anything less than that will be within the compression range, though a ratio of 1:1 will have no effect on the audio. The ATTACK and RELEASE work the same way as in the Expander/Gate while the threshold works exactly the opposite. So a signal will only be compressed if it crosses the THRESHOLD, anything below that will remain unaffected.

The KNEE is a very interesting parameter. It defines how immediate or gradual the ratio settings can be. Broadly speaking, there are two knees (no pun intended!), hard and soft. In the hard mode, the compression ratio is implemented as soon as the signal crosses the threshold. This is what is normally expected, but in the soft knee mode, the compression ratio is gradually increases to the chosen value, resulting in a more smooth compression. This setting along with the attack time can really shape the compressor's onset. In Channel G Dynamics, the lowest value of the KNEE knob gives a hard knee setting while anything above that emulates a soft knee setting. You can see the effect of the knee visualized on the input/output transfer function graph in the '˜GPH' area. The compression curve gets more '˜curvy' as the knee is increased.

Above 100 on the knob, things get a bit more interesting. McDSP has included four knee curves that emulate vintage analog compressors. The '˜Chan' and '˜Buss' mode emulates the channel & buss compressor from an SSL console. The '˜Brit' mode emulates a Neve 33609C stereo buss compressor. The '˜A Soft' and '˜A Hard' emulates an API 225 compressor in soft and hard knee modes respectively. You will also notice that the ratio, attack & release knobs will limit their ranges to match the device being emulated. In fact even the filter's cutoff frequency range will be limited depending on the chosen emulation. 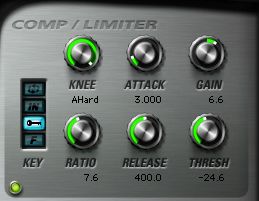 The meters on this plug-in are quite comprehensive. The two leftmost meter's show the input level(IN) of the signal which can be controlled with the '˜IN' knob located at the top left corner of the interface. The next two meter's show the expansion and compression gain reduction(GR) respectively. They are labelled '˜E' and '˜C' for convenience and have an orangish glow to them as opposed to the greenish-yellow look of the other meter. The next two meters show the output from the compressor stage and the last two meters show the output of the entire plug-in, which is after the final gain stage which can be controlled with the '˜OUT' knob on the top right of the display. The meters will peak red if they reach -0.05 dB, so technically the signal hasn't quite peaked yet even if the peak LEDs are lit red.

So, that's an overview of a really excellent plug-in from McDSP that can be quite clinical in operation but at the same time, very non-linear and analog sounding especially with all the knee settings.

Dream It. Do It.
Do you want to learn Dynamics?
Yes, I want to learn!
No Thanks, I just want to read the article.
Feedback
How are we doing?
We'd love your thoughts, feedback and questions regarding our new site. All feedback is appreciated!
We do not respond to this form! If you need support, please visit our support page.
Thank you for your input!
Your message has been successfully sent
Course Advisor
Don't Know Where To Start?
Ask A Course Advisor