All Articles Review
Review: Pump Up the Bass with MaxxBass by Waves
Victor Mason on Thu, March 3rd 1 comments
Language
I once spoke with John Regan, the bass player for Peter Frampton. I asked how he liked his in-ear monitors and his less than enthusiastic reply stuck with me, "They're ok", and he said, and he went on

I once spoke with John Regan, the bass player for Peter Frampton. I asked how he liked his in-ear monitors and his less than enthusiastic reply stuck with me, "They're ok", and he said, and he went on to explain that he didn't like the bass sound, it was too thin. What John needed was a way to improve his bass sound on his monitor mix. Hmmm.. but how?

I always wondered how headphones or in-ear monitors were able to create bass from such a small driver? The fact is they depend on the psychoacoustic properties of your inner ear canal to create the bass sound you hear. You can go one further and say that the bass frequency you hear does not actually exist, but is created in your mind's ear. How's that? Well read on and I'll show you...

Enter MaxxBass by Waves. This is a product which Waves builds, not only as a Hardware product, but as an IC chip which is used in consumer products and, the Plug-in edition is used for professional recording or Pro Live sound.

How does this create an advantage for a Mixing Engineer? Consider this... In Olav Basoski's tutorial, Logic 406, Electronica Work Flow Tricks, you will see Olav consistently use a low cut Eq on just about all his tracks. This is to avoid bass build up which is a problem when adding tracks especially for dance or heavy bass laden material. The problem most of us have is in creating a strong level of bass within the mix, while not muddying up the lower frequencies or causing the compressor to pump like an on/off switch, and this requires some craftsmanship. Using MaxxBass can help you attain this goal.

The plug-in edition of MaxxBass will allow you many ways to work with your mix as a channel strip plug-in, an AUX effect and a mastering tool. In each of these applications you can enhance, sharpen or just fatten up the mix without actually adding more bass. That is an ideal solution in today's world of media playback devices.

Cell phones are becoming more prevalent as listening devices. An upgrade from that might be the built in speakers on a Laptop or, if you're really lucky, a table top portable stereo. All of these consumer devices struggle to create Bass Frequencies that you may intend to be heard but simply aren't produced at the listeners end.

We all know the old trick of using small monitors or a low end playback system to gauge our mix for that kind of medium. But we also have an expectation of better quality playback systems so we don't want to lose out on the systems that give us the audio reproduction we really want to see. So let's put MaxxBass to the test and see how it can give your mix a fatter bass.

How it Works in the Real-World

Here I have chosen a deep low end drum sound which can be hard to mix, especially for smaller speakers to hear the kick drum by the time all the instruments are layered. What you're hearing is a 26" Slingerland kick drum. Below is a screen shot of the Kick drum soloed and it's frequency and levels via the Analyzer. 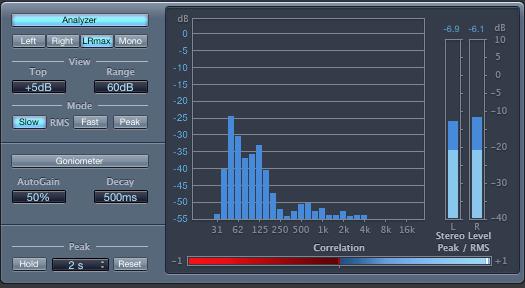 If you have a decent sound system, you should hear a pretty good kick drum sound. If not, you're probably getting a knocking sound of sorts.

Below is a screen shot of the same soloed kick drum with MaxxBass added. Notice it had not increased the low-end frequency: 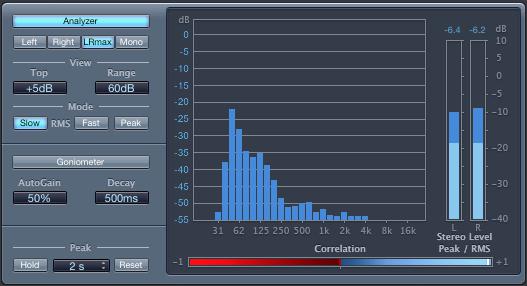 Finally here is the Max Bass sound only:

Below is a screen shot of the Max Bass plug-in set with only the Max Bass harmonics and the original bass taken out. 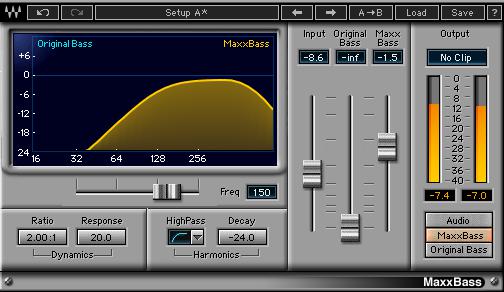 To hear a master in action using the MaxxBass plug-in, check out Greg Townley's Sonic Dimension in Mixing. Greg uses the MaxxBass with only the harmonic section added. His use will certainly open your eyes to the enormous possibilities of this clever and very useful mixing plug-in.
Related

Victor Mason
Has a background in vacuum tube guitar amplifier building as Owner of Mojave Ampworks LLC. Victor is also a recording enthusiast, connoisseur of vacuum tubes and vacuum tube audio products, vintage music equipment and many other things audio both real world and virtual. His llst of cliental span from Billy F. Gibbons, Joe Walsh & Peter Frampton to Blues Saraceno, Vivian Campbell and Stephan Jenkins. Born In Hollywood CA Victor is a Southern California native and resident but has clients all over the world and throughout the international music community abroad. One of Victors favorite parts about his work, is recording vacuum tube guitar amplifiers and uncovering the secrets to the greatest guitar tones ever recorded. Victor also runs the Plexi Palace Message Forum and Blogs on both the Vintage Amps Blog and the Mojave Ampworks Blog.
Related Videos
Comments (1)

Dream It. Do It.
Do you want to learn Cubase 11 101 - Beginners Guide to Cubase 11?
Yes, I want to learn!
No Thanks, I just want to read the article.
Feedback
How are we doing?
We'd love your thoughts, feedback and questions regarding our new site. All feedback is appreciated!
We do not respond to this form! If you need support, please visit our support page.
Thank you for your input!
Your message has been successfully sent
Course Advisor
Don't Know Where To Start?
Ask A Course Advisor