All Articles Review
Review: Samplitude Pro X3
Matt Vanacoro on Tue, January 17th 2 comments
Language
Samplitude Pro X3 may not be the best known Windows DAW, but could it actually be one of the best performers?

I’m always on the lookout for great creative programs available for PC. Although my main production setup is Mac based, I do a lot of consulting with companies, schools and studios that are already heavily invested in the PC architecture. For this reason, I’ve tried to keep my PC rig updated, competitive and working smoothly. Samplitude Pro X3 is the latest addition to my PC music setup and I was excited to see what it could do for my Windows creative rig.

Right from installation, Samplitude Pro X3 demonstrates qualities users look for when seeking out a powerful DAW. The program itself is extremely snappy and responsive, there is a huge included instrument set (more on that later) and there is even a system tray component for managing your audio I/O. This seems like a small thing, but if there’s one frustrating constant of Windows PC audio for me, it’s nailing down reliable and fast audio I/O. Magix kind of ‘takes over’ your WDM, ASIO, and WaveRT audio settings and puts everything in a neat little tray icon that you can streamline and configure. It works extremely well, translates to wonderfully low latency and gave me confidence in the audio engine right from the start.

The DAW In Use

After laying down a bit of audio and MIDI inside of a Samplitude Virtual Project, I began to go about my business of producing and mixing a track. I’m a manual reader by nature, but I always like to give audio software I’m reviewing the ‘blind test’ as I know about 75% of the world out there likes to dive right in. I’m happy to say that there really wasn’t anything I couldn’t find on my own by simply observing the UI. Samplitude includes a handy toolbar both above and below the main arrangement window that allows for quick access to some of its key features, but the ‘meat and potatoes’ things you need to do in a DAW are all present and easily accessible right in the main layout. 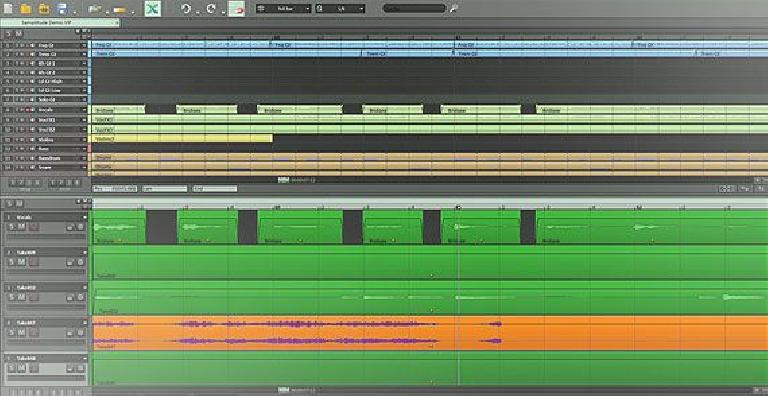 Now that I’ve had a few weeks to track a few different projects within Samplitude Pro X3, several unique features stand out as ‘must mentions’. First of all, the included instrument suite is really second to none on the PC. This area is definitely a weak spot of many PC DAWs, but it’s probably one of the biggest selling points of SPX3. The 70GB content library includes just about every instrument you could need, and the Independence Pro sampler is top notch.

The FX suite included is really fantastic as well. From seamless Melodyne integration to really great amp simulation, you can get up and running on your mix right out of the box with Samplitude. The Vandal guitar amp simulator let me get tones that ranged from clean, glassy and sparkly to gritty, driven and crunchy. From a longtime Mac user’s perspective, Samplitude Pro X3 is as close to a Mac creative experience that you can get on a PC, and I mean that as a high compliment. Everything you need is included, and it all ‘just works’.

Samplitude Pro X3 is a powerful behemoth, but it’s the little things that you encounter that tie the experience together. Customizable editing workflow, clever navigation toolbar shortcuts, convenient track management, content that auto-installs when it is missing, automatic audio time/pitch warping… I could go on for days. What do you get when you pile countless thoughtfully designed features and effects on top of a rock solid and reliable audio engine? Apparently, you get Samplitude.

Cons: Independence, the flagship included sampler, could use an interface ‘spruce up’. Some of the other included plugins look really fantastic and Independence feels a little industrial. It sounds fantastic, however!

Matt Vanacoro
Matt Vanacoro is one of New Yorkâ€™s premier musicans. Matt has collaborated as a keyboardist in studio and on stage with artists such as Jordan Rudess (Dream Theater), Mark Wood (Trans-Siberian Orchestra), Mark Rivera (Billy Joel Band), Aaron Carter, Amy Regan, Jay Azzolina, Marcus Ratzenboeck (Tantric), KeKe Palmer, C-Note, Jordan Knight and many others. He has appeared on many a recording with a variety of artists, as well as had his own music featured in films by Lionsgate Studios.
Related Videos
Comments (2)