All Articles Review
Review: SynthMaster 2.6
G.W. Childs IV on Tue, January 6th 2 comments
Language
SynthMaster 2.6 claims to be an "all-round" synth with most features you could want in one plug-in. G. W. Childs takes a close look at SynthMaster 2.6 and finds it more than lives up to the hype.

These days, I tend to be surprised when a soft synth comes around that I haven't heard of. However, when this scenario occurred with SynthMaster 2.6'¦ well, I'll just say that it's really nice to be surprised. In this review, I'd like to shed light on whether SynthMaster 2.6 really lives up to its namesake.

Regardless of whether you're a synth master, yourself, making sweet patches of your own, or a player that is always looking for solid presets to add to your list of instruments, the presets that show up with SynthMaster are going to floor you. A large majority of the patches are amazing, which isn't something you run into very often. Usually, it's like a few good ones and some mediocre, '˜Electric Oboe' lead, type presets. Not with this synth! It's important to note that many of the patches have effects applied already. This is huge to some performers (like DJs), because it means that they don't have to wet things up during a session. Drop in a patch, and go! However, if you're an audio puritan that wants everything dry, going in, don't worry, through macros and a very well laid out user interface, you'll be able to get those effects off, quick. 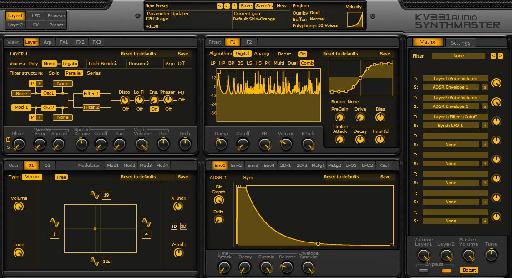 One other thing that I have to mention is the time and effort that appear to have gone in to the skin of SynthMaster. You have several variations to select from for the look of SynthMaster. And, some of the skins go beyond mere color replacement and give SynthMaster an entirely different look. I found a lot of satisfaction in finding a synth plug-in that can match my Live skin! 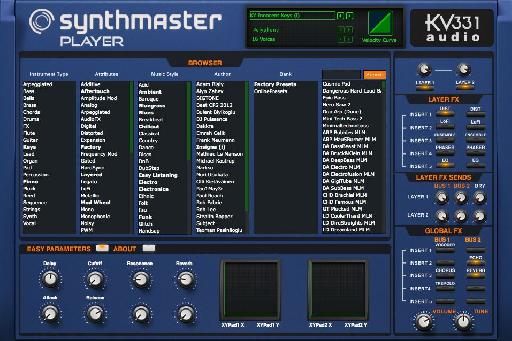 Not Just a Pretty Face

While the designers have done an amazing job keeping SynthMaster easily understandable for people who just want presets, they have also done a very good job at making this synth easily tweakable for those of us who will definitely be making our own patches. The interface is easy to understand and takes very little time before someone with even a little bit of experience programming a synthesizer will be up and making patches of their own. While SynthMaster has many different pages or screens within its GUI, the layout makes sense. It really does follow the mindset and workflow of many of the other great synths out there. The Layer Screens allow you to modify the filter routing as it occurs within your patch. The diagram is handy, as it really does show you how sound will flow through SynthMaster, making this synth an excellent beginner synth.

Oh, and the claims are not lies, SynthMaster does have serious modular leanings. Like popular synths like Razor, it's easy to switch out your oscillator type with other technologies found in synthesizers of the past, beyond mere subtractive synthesis. Wavetable, Vector, Additive, even an Audio In act as oscillators types for SynthMaster. Considering that two layers (which is what you get with one patch) gives you four oscillators, it goes without saying that you can get very thick! Filters go along the same path, by the way. Two main filter types exist: Digital, and Analog.

As you can imagine, there are several variations within each filter type. I fell in love with the Comb filter, right off the bat, as it has an extremely current sound. SynthMaster gives you an excellent idea of what really is going on in a Comb Filter by showing you the frequency pattern, where many developers just kind of ask you to take their word for it for what is being done with your sound. All filters are very visual with SynthMaster, and also offer quite a bit of flexibility in how they can be modulated through the very easy-to-use Matrix screen.

With effects that rival any major player out there, as well as presets and an online preset library already integrated within SynthMaster that is continually expanding, you'll have to work hard to find a synth, especially at this price, that will give you more.

SynthMaster, to me, is kind of like someone out there saying, 'I wish we could just merge these three really awesome soft synth together, and make one really awesome one.' And, that's really what they did. The technology, the artwork and the workflow are all familiar. But, it's really, really polished. Where the '˜classic' soft synths are treasured workhorses that can do no wrong, SynthMaster says, 'No, wait, it can be done better.' And, it does.

With effects that rival any major player out there, as well as presets and an online preset library already integrated within SynthMaster that is continually expanding, you'll have to work hard to find a synth, especially at this price, that will give you more. As for me, I'll be using this synth till they pry it out of my hands.