All Articles Review
Review: VocALign Pro 4
Sara Simms on Wed, September 28th 0 comments
Language
VocALign Pro 4 automatically analyzes the patterns of two audio signals and edits one to match the timing of the other. If you're editing audio could this be your new best friend? Sara Simms finds out

If you work with vocalists and instrumentalists in the studio, you know how challenging aligning double takes and harmonies can be. Ever wish you didn't have to spend hours nudging around audio files so they're playing in time? VocALign Pro 4, the advanced version of VocALign promises to save time by instantly matching the alignment of one audio take to another. Would this plug-in really be able to perfectly align audio files? I put VocALign Pro 4 to the test in my DAW, to see if it would really live up to all it claimed to do.

To use VocALign Pro 4, you'll need two tracks of audio to sync together; these can be vocals, instruments or sound effects. Note that if you're syncing vocals, you'll need to be sure the vocals are tuned before syncing them, as VocALign Pro 4 does not change the audio's pitch. The track that has the proper timing is called the 'Guide' track and the track that will be synced to the 'Guide' is the 'Dub' track. The Guide track must be selected in the Side Chain in order for VocALign Pro 4 to recognize it as the guiding audio file. Once that's been done, solo the two audio files and press 'Capture Audio' to capture both files. Next, the Edit button must be pressed to align the audio together.

Using VocALign Pro 4 couldn't be simpler. Vocals and audio synced together with the plug-in sounded very tight. One discovery I made was not to record too much silence before or after the audio files when capturing them. The silence before/after audio files can be compensated for inside of VocALign Pro 4 by adjusting the Sync Points on the far left and right-hand side of the waveforms. If adjustments are made to the Sync Points, the Edit button must be pressed to re-sync the audio files together. A nice touch in this plug-in is the Loudspeaker, which turns green to demonstrate when the audio files are in sync and can be played, and red when they're not synced. 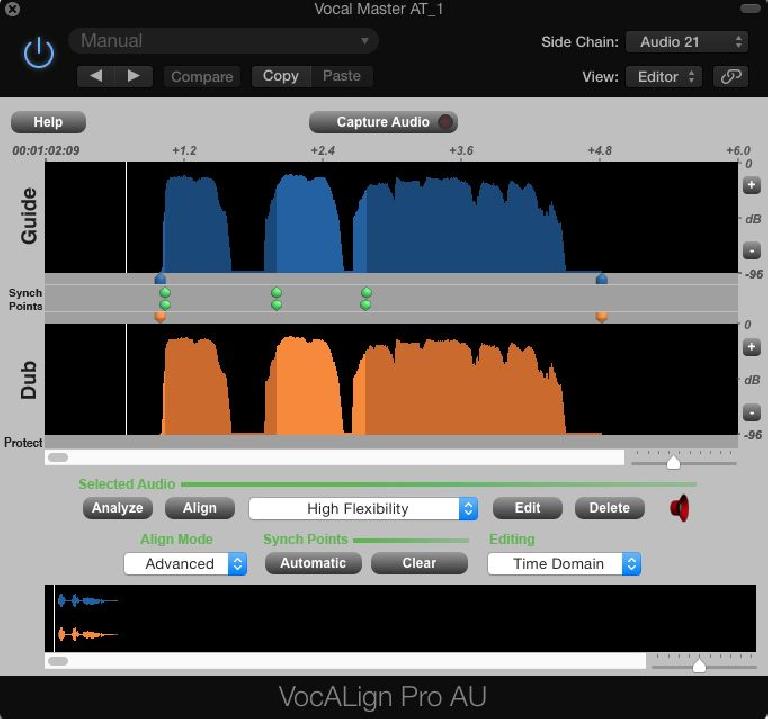 Depending on the level of synchronization needed, there are different levels of 'Flexibility', ranging from Low Flexibility to Maximum Expansion. For the audio I was syncing together, I found that the 'High Flexibility' setting worked the best, although the level of 'Flexibility' needed will be different for each project. There are also 'Sync Points' that are automatically set and can be adjusted. I found that my own audio files synced up so well with VocALign Pro 4 that I didn't need to adjust this option, but it's a helpful feature to have available.

Here's an example of two audio files, before and after synchronization: 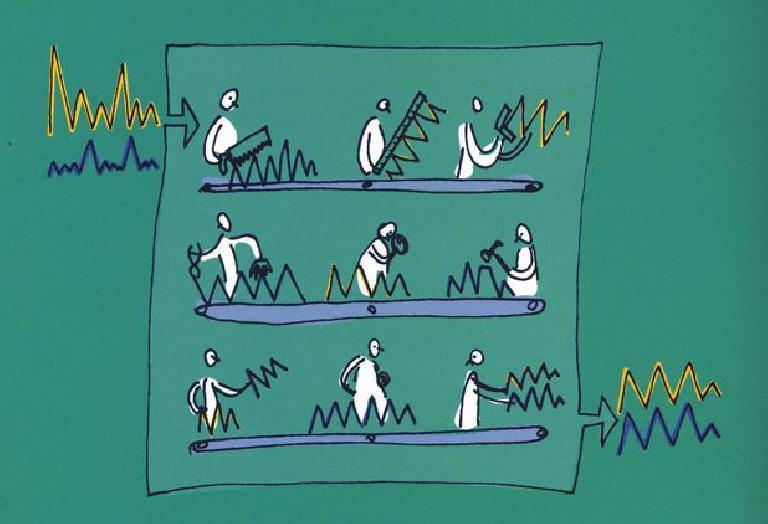 The way that VocALign Pro 4 actually works is pretty interesting. The plug-in analyzes both signals using analyzers that produce 'time varying energy patterns.' Then it uses pattern recognition to examine the takes, and determines the best way to 'warp' the Dub audio to match the Guide. The Dub signal is then processed through a processor that changes the timing of the audio to match the Guide, and the edited version of the Dub signal can be played. I imagine the algorithm for VocALign is quite complex, and I'm impressed by how quickly and accurately this plug-in is able to process audio. 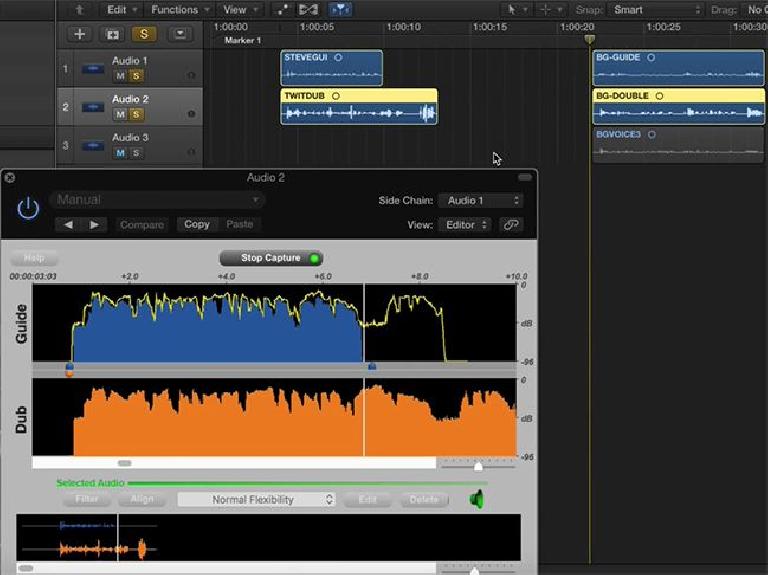 VocALign Pro 4 can also be used to align three or more audio takes; in order to do this, you'll need to run another instance of the plug-in on the third audio file and set the Side Chain to the same Guide track that you've set as the Guide for the double takes of audio. Aligning three audio files works just as well as two, so long as the same Guide is used for all of the tracks that are synced together.

Overall, I found that VocALign Pro 4 is an extremely helpful software that does what is promises, and works very well. It's easy to learn to use, thanks to resources available on the Synchroarts website and YouTube. This plug-in is capable of saving producers and engineers countless hours of time that were previously spent tediously aligning tracks by hand. VocALign Pro 4 aligns audio tracks quickly and accurately and has a simple and straightforward layout. VocALign Pro 4 would be a very useful and time saving plug-in for those who work with ADR, double-tracked vocals and backing harmonies. Highly recommended.

Pros: Accurately edits the timing of one audio file to another, Easy to use, Saves time, Audio Suite, AAX, VST3 and AU plug-in integration for most popular DAWs.

Cons: Quality always comes at a price, and while VocALign Pro 4 works well, it's not cheap. Priced at $399 USD, it's a plug-in that most producers will have to save up for before investing in. Despite its benefits, the cost alone may deter or delay potential users who could benefit from this plug-in from purchasing it.