Logic Pro is a great application and has always been my DAW of choice, but there are certain long standing issues with it that drive users like me cuckoo for cocoa puffs and one of them is the inability to tell the Klopfgeist (Logic's metronome) to beat dotted quarter notes instead of 8th notes in 12/8 or 6/8.

At a fast tempo, hearing all those 8th note clicks is incredibly annoying. I will often play the figure in as triplets in 4/4 and convert it to 12/8 later. In Pic 1, you can see is what I played.

If I am going to give this part to a musician to play however, I may want it to be in 12/8 because the two meters do feel somewhat different. After I change the meter to 12/8 in the Transport Bar (or by dragging the A/B symbol from the Part Box and then defining it) I get what you see in Pic 2. It sounds the same, but now is no longer correct with the click and not what I want to give to a musician to play.

The first issue is that with the meter change made, the two bar region is now considerably smaller. As you can see in Pic 3, the end of the second bar is missing.

No problem, right?  I simply double-click on the region length in the Event List and change it to two bars. I now have what you see in Pic 4. Oh, dear.

Pic 4: The same region after changing the region length to two bars.

I undo the region length change. In the Arrange area with the Pointer tool, I grab the lower right hand corner of the region and the Pointer tool becomes a length change tool. If I do so, however, while holding the Option key the yellow help tag now says 'Stretch', which means I am doing some time expansion. I drag it out to two bars and, as you can see in Pic 5, I am much closer to what I need.

Pic 5: Our part after time-stretching the region. 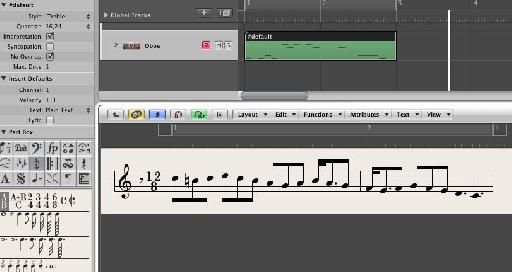 Pic 7: Our part after changing Display Quantize to 8.

Well, that was easy enough. But let's look at another scenario. In Pic 8, you can see a part I played in 4/4 that really should be in 3/4. When I change the meter to 3/4, it appears as what you see in Pic 9. It is not incorrect but it is beaming in groups of two and it would look better for the player in groups of six in my opinion.

Pic 9: The part's beaming is in groups of two after converting to 3/4.

Fortunately, this is also an easy fix. I select all the notes in the first measure and either by going under the Attributes menu and navigating to Beaming > Beam Selected (as you see in Pic 10) or by simply using the pre-assigned key command, they are beamed together (see Pic 11). 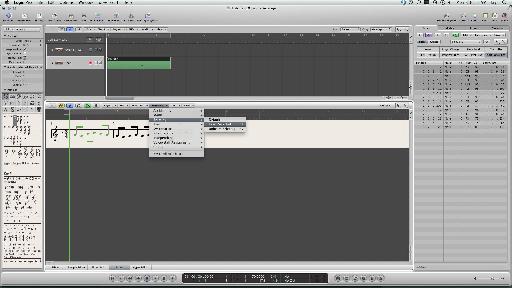 Pic 11: The notes in the first measure are now beamed together.

I then do the same thing for the second measure and as you can see in Pic 12, we are good to go.

Pic 12: All notes are beamed in groups of six.

Shameless self-promotion alert! I cover this and a couple of more difficult scenarios in my new book 'Scoring With Logic Pro' (Pic 13). 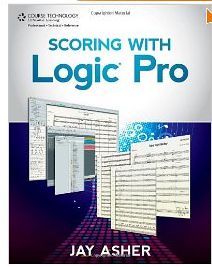