Snohomish, WA, March 3, 2019 — Roland Cloud is pleased to announce the addition of the Roland TB-303 to its suite of software instruments. Utilizing the same ACB (Analog Circuit Behavior) modeling as the Roland JUNO-106, JUPITER-8, and others from Roland Cloud’s Legendary series, the virtual TB-303 captures the hypnotic tone of the original hardware and forms the perfect complement to the TR-909 and other instruments in Roland Cloud.

When Roland released the TB-303 Bass Line in 1981, it was marketed as a computerized bass machine to simulate traditional bass guitar. Inventive electronic musicians found a world of uses for the little silver box with the liquidlike low end. And like the Roland TR-808 and its influence on hip-hop, the TB-303 played an essential role in the development of late ‘80s-early ‘90s rave culture. 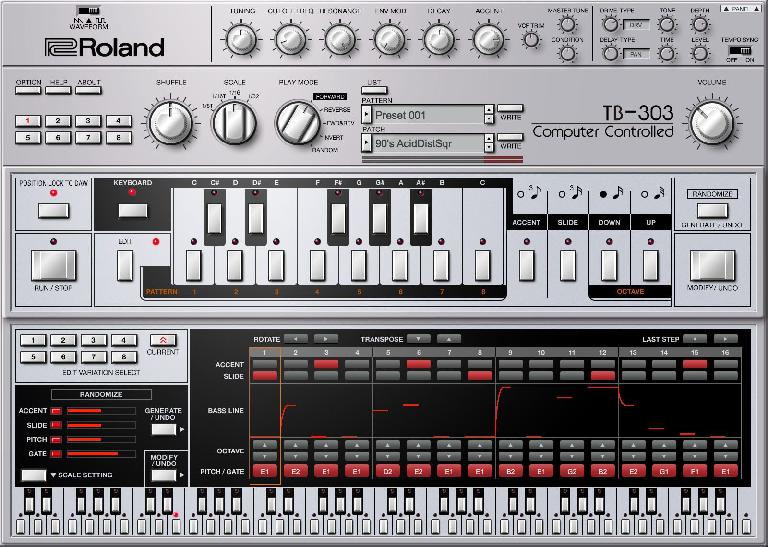 For the first time, the TB-303 can hold up to 64 patterns and 64 patches per bank. The eight variations of a pattern are still accessible on the faceplate. Plus, with 32 preset patterns and 48 unique sounds, the 303 arrives prepared with sonic templates ready to explore.

A hidden panel on the far-right corner of the 303 unlocks a variety of new tone-coloring features. Users can explore the expanded circuit modification via the new VCF trim, Vintage Condition, and Master Tune knobs. The onboard effects, including distortion and delay with tempo-sync, are ideal for inspiring fresh ideas.

Roland Cloud’s TB-303 provides the means to emulate the past or pave brave new pathways. It is an instrument with a proud history of shaking up the status quo and defying expectations. Use the TB-303 to leave an imprint on tomorrow’s sounds and become part of a lasting legacy.