When you start getting deeper into production, you may wish to introduce dynamics into the mix. A great way to do this is to incorporate sidechain techniques to provide some pumping and ducking effects. This can really open up your mix so that you can hear all the elements. Let's take a look at how this is done in PreSonus Studio One.

Sidechaining is often used to get a sound to duck down so that it doesn't compete with another sound in the mix. This is often the case with a kick and bass. Both can occupy a similar frequency range, and making space for them with dynamic effects can really improve your mix. When the kick hits, you want the bass level to drop down slightly so that this kick really punches through, and this can be achieved quite easily with compression sidechaining. 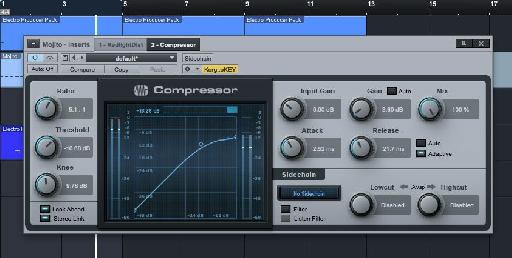 Set the Ratio to about 5:1 on the compressor.

Now to enable the sidechain. On the Compressor click on the Sidechain button, and on the bottom right under the Sidechain section it should now read '˜External Sidechain' as the source. 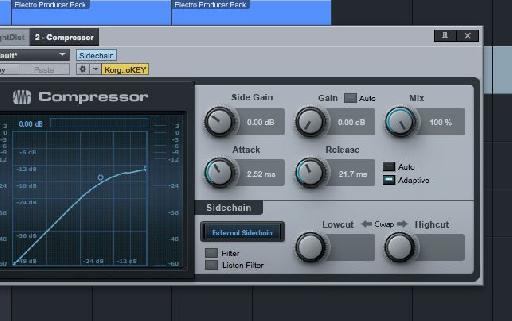 Jump over to your kick track. You have to tell the kick that it's going to be the external source for the Compressor now. On the Sends section on the kick you can add a Sidechain source. Click on this to show you the sidechain options. Scroll through this and select the bass track Compressor. I have used the Mojito synth for the bass, so it should be something like this: Sidechain '" Mojito '" Inserts '" Compressor 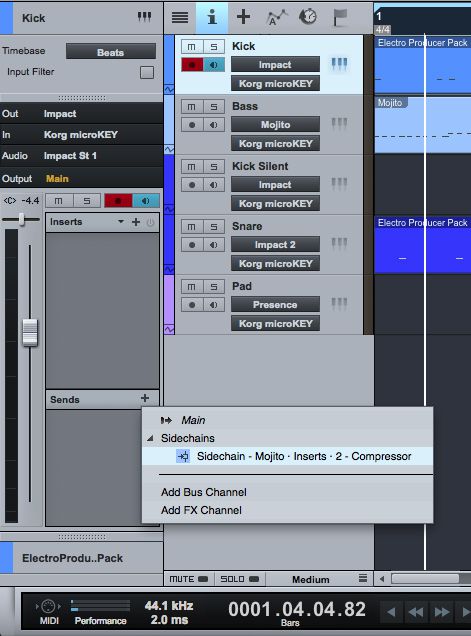 Now when you playback the audio you see on the Compressor how the Gain Reduction meter is responding to the kick now, not the bass track. The more you bring down the Threshold the more the bass gets ducked through the sidechain compression. Increased the Sidechain knob next to the Gain to increase the kick sidechain level to the Compressor. This will also impact how much it's ducking the bass.

Sidechain is a great technique to create some space in your mix for specific elements if they are competing for the same space.

Step 3 '" Sidechain with a Silent Source

What if you want to use a sound as the sidechain source, but you don't actually want to hear this sound? For example, let's say you have a pad sound with some long sustained notes and you want to create some ducking effects with it with something like a dummy kick track, but you don't want this kick track heard. This is easy to do.

On your pad sound insert the Compressor. Let's use quite a heavy compression setting. Use a ratio of about 11:1, and a long attack of 56.5 ms and short release of 10.5 ms. Now for the sidechain effect. Make sure Sidechain is enabled on the Compressor, so that it reads the External Sidechain.

A heavy compression setting on the pad sound.

Now use a kick track as the source. This will be the dummy kick so in the end it won't be heard in the mix. For this instead of using the Sends, let's change the output. Click on the Main Output, a list will come up, and scroll down to Sidechain. From the drop-down menu choose the Pad Compressor. I'm using an instance of Presence as my pad sound. So this will be: Sidechain '" Presence '" Inserts '" Compressor. Now the Kick won't be heard but its signal will be sent to the Pad track. 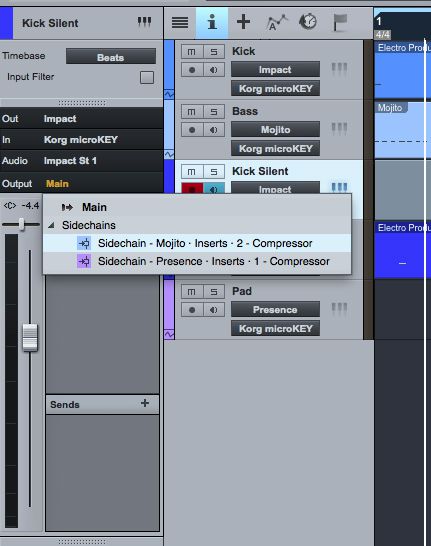 You'll need to change the output to "Sidechain".

Increase the Sidechain level to 12.42 dB. Now playback the track and start pulling down the Threshold and hear how the dummy kick track changes the pad sound.

Adjust the Compressor for the desired sidechain effect. Use a long attack for a more subtle ducking effect, or a shorter attack for it to hit in sooner. Also try different release times to hear how they sound. This works really nice in a breakdown section in a song. You can drop out all the other tracks in your song so only the pad sound is playing, but the pumping effect introduced with the sidechain compression can add a rhythmic element to this sound.

You can also get similar sidechain effects with the Gate, but a gate will cut off the sound giving a more drastic sonic effect. Let's try this out on a sound with long sustained notes again like a pad. Insert the Gate onto the track. Enable the Sidechain button so it now reads an External Sidechain.

Let's use the kick track again as the external source. On the kick sends choose the gate as the source. 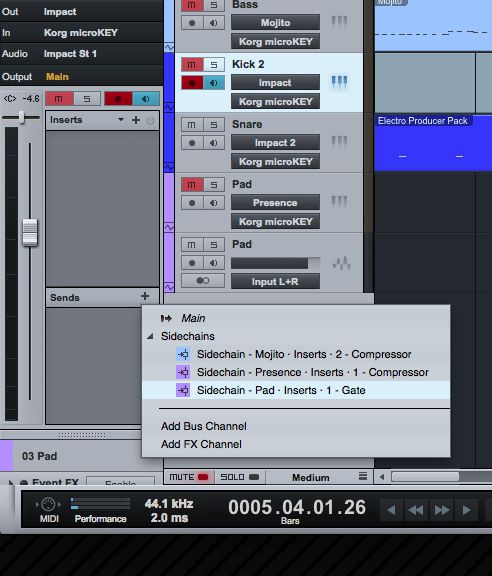 Remember to set the source for the sidechain.

Depending on the sound, you may have to use different settings. But let's start off with a Range set to -50dB. Set an Attack of 60 ms, a long Release of 238.9 ms and the Hold of 213.8 ms. Play back the song, and start tweaking the Open and Close Threshold. You should see in the Gain Reduction meter and how the Gate is working on the sound. Adjust the parameters as needed, but you'll hear how much more dramatic this ducking effect is on the pad sound. For example, try out different Attack, Release and Hold times and hear how it alters the gated effect.

That's how to make use of sidechaining techniques to create some dynamic changes in your productions. You can use it to create space for competing sounds in the mix, or use it for creative effects in your songs like shown with the pad and the dummy kick clip as a unheard source.

To learn more check out these video courses on PreSonus Studio One:
https://www.askvideo.com/courses/application/studioone
Related

Dream It. Do It.
Do you want to learn Mixing and Mastering Toolbox?
Yes, I want to learn!
No Thanks, I just want to read the article.
Feedback
How are we doing?
We'd love your thoughts, feedback and questions regarding our new site. All feedback is appreciated!
We do not respond to this form! If you need support, please visit our support page.
Thank you for your input!
Your message has been successfully sent
Course Advisor
Don't Know Where To Start?
Ask A Course Advisor