All Articles Audio Software
Sound Design Tutorial: Create a TB-303 Patch In Spectrasonics Trilian
Toby Pitman on Wed, June 29th 3 comments
Language
I very much doubt that when Tadao Kikumoto designed Roland's TB-303 in the early 80s, he knew that he would be starting a cultural revolution! On its release in 1981...

I very much doubt that when Tadao Kikumoto designed Roland's TB-303 in the early 80s, he knew that he would be starting a cultural revolution! Upon its release in 1981 the product, intended as a simple '˜Bass Line' accompaniment box for singers and songwriters, was a flop. It was so unpopular that it was discontinued in 1984 with around 10,000 units produced.

Then in 1987, a Chicago-based outfit called Phuture released a track called '˜Acid Tracks' and Acid House was born. The TB-303 was the sound that defined the song! Squelchy, resonant, distorted and repetitive.

Since then it's made an appearance on literally tens of thousands of records from Pop to Hip Hop, Electro Rock to Ambient. And it's still going strong!

Emulating a TB-303 in Trilian

There are of course some excellent dedicated software and hardware emulations of the 303 available (if you don't want to spend $2,000 on an original, with a Japanese manual!!!).

It is however really easy to knock one up in Spectrasonics' powerhouse bass synth Trilian, and a lot easier to program. And it sounds pretty good, too! Let's do it!

Open Trilian and select the Edit window. Click on the Soundsource image in the center of the panel to open the browser.

Navigate down the Source list to Roland TB-303 and select the waveform called TB-303 Sawtooth. 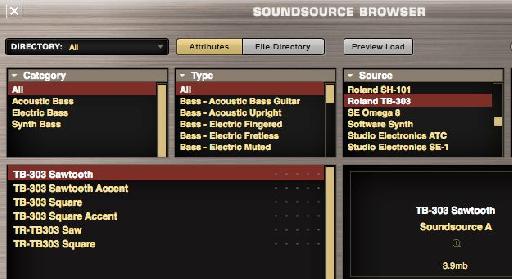 Half the battle is already won as Spectrasonics has lovingly sampled the waveforms from the original model, which does have quite a distinctive sound.

Go back to the Edit window and set the Amp and Filter envelopes like so:

On both envelopes, turn down the Velocity ('VELO') knob to 0%. Done!

Turn the Filter section On and load in the 'LPF Juicy 24db' Lowpass from the drop down menu. Set the ENV amount to 0%.

Now it's time to set up the Voice Controls for the sound. These are on the right-hand side of the Edit window. Set them up like this: 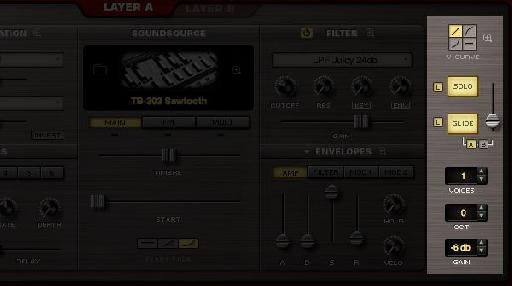 The sound is monophonic so I've enabled Solo (in Legato mode, the tiny 'L' to the left of the Solo button) with 'Voices' set to 1 (to be on the safe side!). The 'Oct' is set to 0, and the 'Gain' to -6 db.
The Glide is on (again, in Legato mode) for Layer A with a time of 9ms. I found this to be the optimum time setting when comparing against other 303 clones.
Solo and Glide are very important as they affect how the Note triggering, Envelopes and Portamento effect work on overlapping notes.

How you program your sequence will affect how the 303 sound will work. The TB-303 has two kinds or notes, short and tied.
Short notes I found have a length of about 2/3 of a 16th-note. The gap between them, apart from sounding right ensures that the sample is re-triggered, as well as the Filter envelope.
Any longer notes you program should have this gap at the end, too. Long notes on a 303 are made by putting two notes of the same value one after the other and enabling Glide to the first note. This ties them together to make one note.

On the 303 you will only hear the Portamento Glide effect if the two '˜tied' notes have different pitches. In a sequencer this is done by overlapping notes. You can hear this in the example below.

The time we set for the Glide (9ms) is constant so the farther away from each other the notes are, the more extreme the effect.
These overlapping notes also serve to prevent the sample re-triggering from the start (Solo mode) and also stop the Filter envelope from re-triggering. The Glide and Filter envelope are two trademark sounds of the 303.
Here's a sequence I've put together. It has short, long and overlapping notes. Here it is with the Filter set to 1370 kHz. You can copy it or make your own to test the sound. 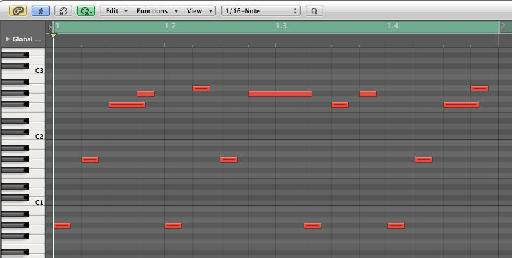 Before we start to tweak this sound I'm going to assign the parameters I need for the Patch to do its thing to the Macros in the Main Controls page. This just makes it easier to reuse the Patch later and looks cool as well!
If you switch to Main you'll see the default Controls mapping. These are dead easy to change. First, I'm going to map the Filter's Cutoff. 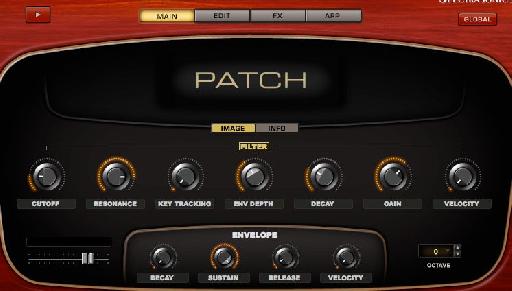 Before you assign a new parameter to the control it's a good idea to clear it as it will already have parameters assigned to it. If you don't, your new parameter will be added to the list which could cause some problems later.
Control-Click on the Cutoff knob and choose 'Clear all parameter assignments for this control'.

Now Control-Click again and choose 'Assign this control to the next  touched audio control'. Go to the Edit page and click Cutoff in the Filter section.
Rename the new assignment CUTOFF. 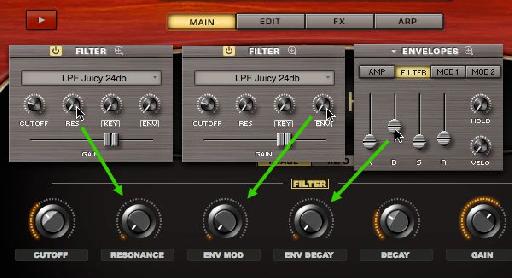 Now I'm going to assign these Controls to a Group. I do this by clicking and dragging left on the the far right corner of the separator bars. A new Group is created called 'Group 2'. We'll use it later.

You can now assign these hardware MIDI faders by Control-Clicking on each knob and choosing  'MIDI CC Learn'. You could also use your host's automation assignments for these, too. In Logic, for example, it's the Controller Assignments window.
Now I'm all hooked up, and I'm ready to record some tweaking. Here's a quick example. I'm just playing with CUTOFF, RESONANCE, ENV MOD and ENV DECAY parameters.
That's about it for the basic setup. Save out your Patch. Don't forget you can always use the TB-303 Square waveform by simply switching to it in the Soundsource window.

You can go a step further and add Distortion and Delay to make a more aggressive 303 Patch if you like. Here's a setup I made for mine: 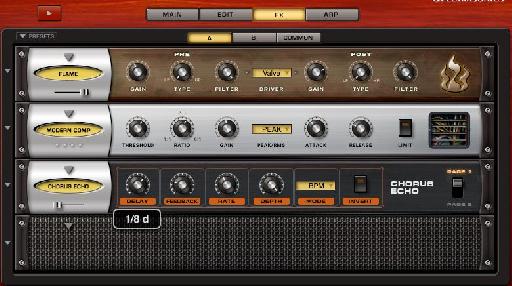 And here's how I've assigned the parameters to the Main Controls: 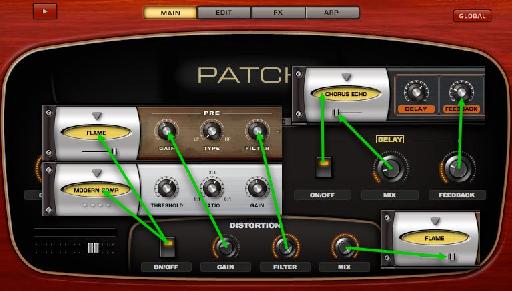 The result is pretty hardcore!
So that's it! A TB-303 in Trilian. The only thing you need now is a large field to stand in and some glow sticks!
Find out more about Trilian on the Spectrasonics website here. Learn more Trilian tricks in the Trilian 101 tutorial.
Related