All Articles News
SoundStorming, the Social Music Platform that Challenges Music Discovery
Rounik Sethi on Wed, March 18th 0 comments
Soundstorming aims to help musicians and artists use their phones as a remote platform to be discovered instead of their sonic ideas being recorded, discarded and forgotten about.

9 out of 10 artists are left forever undiscovered. Chances are, the next potential hit by an undiscovered artist is stashed away in a garbled voice memo right now.

A new social music app, SoundStorming, is going to change how artists are discovered by making music’s process of creation social. Today's musicians are continuously recording song ideas on their phones, this means that artists have hundreds of potential great songs or sounds that are never shared or further developed. Translated globally, this means millions of beats, rhythms, melodies, remixes, and collaborations never see the light of day -- and millions of wasted opportunities for fans and other creators to discover new sounds, new artists, and collaborations.

A key to unlocking that hidden treasure trove of creativity is SoundStorming, a social music platform where musicians, songwriters, and artists can connect, collaborate, and promote their talent by sharing their in-progress musical ideas with a global community. The SoundStorming team’s ambitious goal is nothing less than to change the industry – to fill the gap between the music that is consumed and the music that’s being created while incubating the next generation of top musicians in a collective space that focuses on sharing music as a creative process rather than a finished product.

“We see ourselves as connecting the fragmented worlds of music creation, collaboration, and distribution, in one place,” explained SoundStorming co-founder, CEO & Musician, Arnau Bosch. Together with co-founder and COO Alicia Rius, he created a new mobile app designed to allow musicians to record, share, and brainstorm with other artists across a social platform, ushering in a new wave of collaboration and innovation.

An artist, for example, can record a melody, and another musician from the other side of the globe can collaborate on it and give the original song a new twist. On the other hand, a renowned artist can use SoundStorming to share the first chords of her latest hit, before playing it live, or from the hotel room before the show. The platform has an auto time-stamping feature that ensures each musician owns the rights to his or her own contribution to the composition.

SoundStorming’s brilliance is in its simplicity. Just record, share, and then collaborate. Says Bosch. “Music is the top category on social media, making it a potentially powerful tool for artist discovery -- but musicians usually engage with audiences through content that has nothing to do with music on these platforms. Social Media is about creating an outside image: fabricated, filtered, unreachable, and egocentric. SoundStorming is about talent, not looks, making it the first true social music platform”. 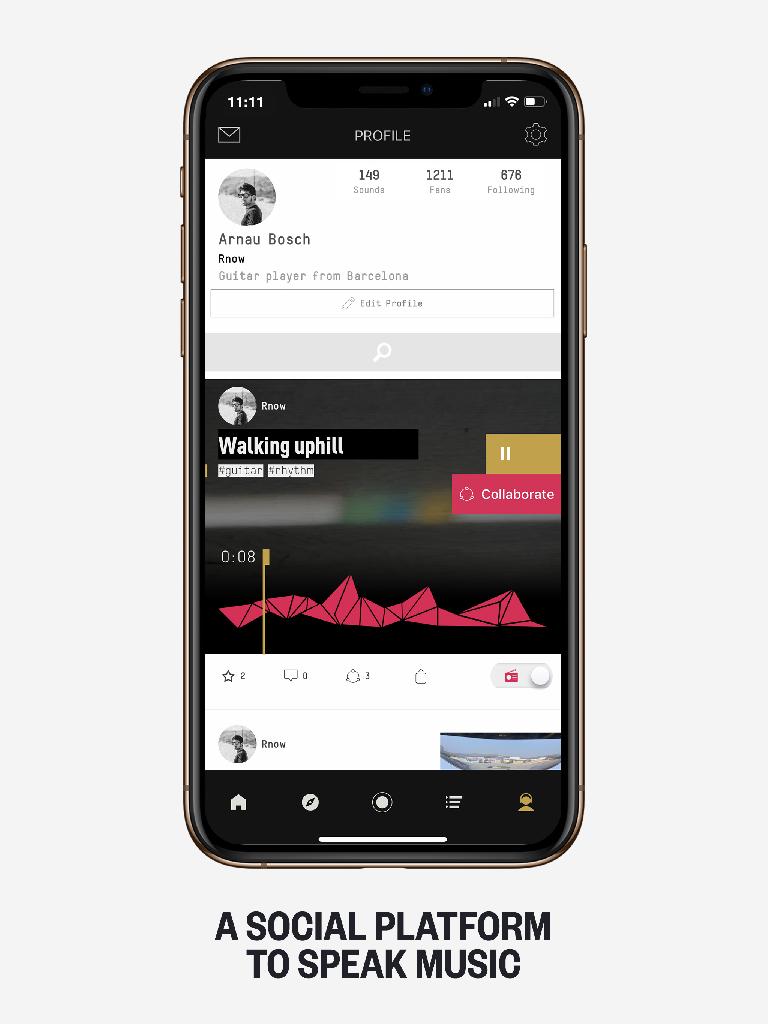 Music has always been Bosch’s passion. Since buying his first Spanish guitar at seven years old, he has been playing and using music to meet and connect with other people, often sharing sketches of songs with friends across the map via his phone’s voice memos. Fast forward to the last four years: as Creative Director for Apple at TBWA\Media Arts Lab, Bosch was instrumental in the launch of the Apple Music platform and was fortunate enough to get exposure to the real data of the music industry. It was while working closely with top music industry professionals in this capacity that he had his light-bulb moment. “As a creative agency, we found ourselves spending dollars creating secondary assets to promote the real assets: their music. There's a need for exclusive content in all streaming platforms, and we know that more than 95% of musicians record ideas on their phones. If I could go deep into their phones, I could actually start taking out some ideas that tell the story behind their music. Ideas that tell way more stuff about the real artist and what is to come. That is the most exclusive Music content there is."

Under the existing model, musicians reach their audience through distribution -- after a long process of writing, producing, mixing/mastering and relying on the good graces of the industry’s traditional gate-keepers. SoundStorming throws a liberating wrench in that system with the goal to allow artists to share their music with an ever-growing and supportive community from the very beginning of their creative journey.

The strategy is to roll it out in three phases. The first step is empowering the next generation of musicians with a streamlined, user-friendly platform that makes it easy and rewarding to network and collaborate with other artists. The second step will be to bring the professional community of established musicians, producers, A&R folks, etc. into the mix; people who can give well-needed advice and mentoring to emerging artists. The third step will be to open the doors to audiences so artists will be able to use the creative process as exclusive content to engage with fans and be discovered.

“If you open those doors, you can really imagine what kind of interaction and engagement we're bringing between artists and fans – something that’s never been seen before,” says Bosch. “I would love for artists to understand the power that they have with their ideas, and to be able to give them the tools to really utilize those ideas.