LONDON, UK: launched late-August at London’s legendary Barbican Centre to widespread wonderment, Spitfire Audio is proud to announce availability of BBC SYMPHONY ORCHESTRA — the most essential orchestral package the sound- specialising British music technology company has ever created, working in partnership with BBC Studios, the British television production and distribution company that is the commercial arm of the oldest entertainment organisation in the world, and in close collaboration with one of the world’s most renowned orchestras (to which it obviously owes its notable name) at one of the world’s most renowned recording venues (London’s legendary Maida Vale Studios) to realise a new standard in orchestral composition as a landmark library lovingly presented within Spitfire Audio’s award-winning standalone plug-in (also available to buy as a sleek 1TB Samsung 860 EVO SSD housed in a beautiful bespoke hard case, providing plug-and-play-style playability in an instant, without waiting to download the library) — as of October 24…

“To suddenly have all I need at my fingertips is a game changer.” Cutting to the creative core of what makes BBC SYMPHONY ORCHESTRA so special is Spitfire Audio co-founder and composer Christian Henson. He has every right to be so musically moved since this is the most essential orchestral package the sound- specialising — sample library-, virtual instrument-, and other useful software-creating — British music technology company he has helped build from the ground up into what it has become today — collaborating with the best composers, artists, and engineers in the world to build musical tools that sound great and are exciting to use — has ever created. Clearly, Ivor Norvello Lifetime Achievement Award-winning British-Indian composer, musician, and producer Nitin Sawhney (Mowgli: Legend of the Jungle) concurs when stating, “Incredible and revolutionary; this is an epiphany for every composer with access to a computer — the stuff of childhood dreams for musicians.” As does Los Angeles-based, GRAMMY® Award-winning Canadian composer, musician, and producer Greg Wells (The Greatest Showman, Adele): “Exquisite, exquisite stuff; I’ve dreamt about being able to use technology like this.” Technology definitely doesn’t get greater or musically more exciting than BBC SYMPHONY ORCHESTRA, a new standard in orchestral composition.

Why? Well, while orchestral samples have become an essential component of modern scoring, and the range of libraries available is vast, what if a single product could become the universal starting point for a generation of composers? Clearly, this is the taxing compositional question that Spitfire Audio has successfully sought to address with BBC SYMPHONY ORCHESTRA. On the face of it, Spitfire Audio has taken over a decade of sampling experience to bring this comprehensive orchestral library of epic proportions — comprising over 200 hours of recordings resulting in 1,000,000-plus samples, all available at anyone’s fingertips — to the likes of Nitin Sawhney and Greg Wells, which sound exactly as they would if its world-renowned BBC Symphonic Orchestra namesake was performing right there in the same room as any (computer-based) composer, top-tier or otherwise.

That thankful musical mission to create the truly cohesive sound that is BBC SYMPHONY ORCHESTRA saw Spitfire Audio ably recording 55 different instruments on world-class Millennia pre-amps, including groups and soloists, with 418 techniques, including 33 legatos, for each melodic instrument. It also includes a staggering 20 signals, including 11 microphone positions, two stereo mixes, a set of signals designed for use in Dolby Atmos mixing, plus five spill signals, for added realism and ultimate control. This is, indeed, the definitive orchestra, made accessible through cutting-edge technology, all in one perfectly-produced package.

Put it this way: with BBC SYMPHONY ORCHESTRA, Spitfire Audio has finally been able to capture what no other sample library has hitherto achieved — a family of astoundingly accomplished players that has shared the stage for thousands of hours, whose musical telepathy and 90-year heritage of performances and recordings is a national and international treasure. The BBC Symphony Orchestra to which BBC SYMPHONY ORCHESTRA obviously owes its hallowed name has been expertly recorded by the talented and trusted team that is Spitfire Audio at home in London’s legendary Maida Vale Studios, host to The Beatles, Hendrix, and Bowie as a complex of seven BBC Sound studios sited in one of the BBC’s earliest premises, pre-dating Broadcasting House, and the centre of the BBC News operation during World War II, before being used to record thousands of classical music, popular music, and drama sessions for BBC Radio 1, BBC Radio 2, BBC Radio 3, BBC Radio 4, and BBC Radio 6 Music from 1946 to the present. Musically, Maida Vale has also been home to the BBC Symphony Orchestra since 1934. 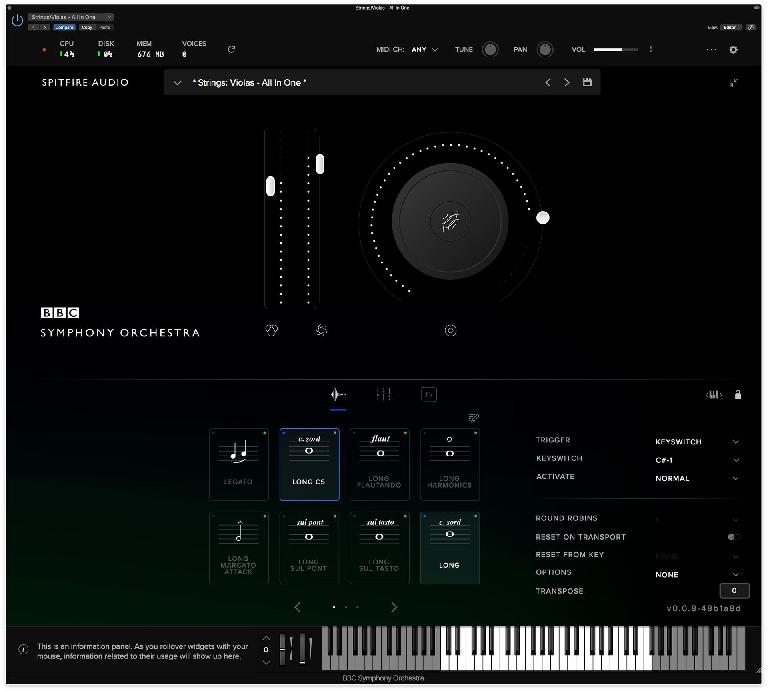 85 years later, BBC SYMPHONY ORCHESTRA is comfortably housed in Spitfire Audio’s award-winning standalone — AAX-, AU-, VST2-, and VST3-compatible, NKS- ready — plug-in, developed primarily for composers, by composers... easy to use, intuitive, and inspiring. But BBC SYMPHONY ORCHESTRA is so much more than a sample-based virtual instrument library alone — albeit an outstanding one like no other on earth, as Spitfire Audio admirably continues to work on new ways to encourage composers and music-makers to work together and share using BBC SYMPHONY ORCHESTRA itself, learning from each other to gain more knowledge and help everyone improve their compositional skills for the better.

Better still, Spitfire Audio is proud to also announce The Page, a brand new concept centred on building a singular knowledge resource for its community. Christian Henson has this to say: “A few weeks ago, we announced our most ambitious project to date — one orchestra, one plug-in. A universal starting point. A means in which we can truly collaborate and learn from one another. Music has always been about coming together and sharing, and we want to take that into the modern age. But we can’t do that alone. This is where we need your help. We’ve built a thing, but we don’t know what it’s going to become, because we want you to define that. The Page is literally a blank page at the moment, but we hope and dream that it will be a place for people to congregate, collaborate, share, and learn — whether it be from content we make or, indeed, us just aggregating content elsewhere. We want to make new YouTube stars — whatever you contribute, you will have the full power of the machinery of Spitfire Audio and this incredible community of hundreds of thousands of composers globally.”

Logic Pro templates, MIDI files, tutorials, and more. More meaningfully, all will be there on The Page for the taking and (music) making. BBC SYMPHONY ORCHESTRA is just the beginning. Indeed, its creators collectively are excited for what 2020 will bring — both to the sound-specialising British music technology company and the BBC Symphony Orchestra!