All Articles News
Spotify's 2016 Revenues Up 52%, But Net Losses Rise To $597 Million!!
Rounik Sethi on Thu, June 15th 0 comments
Is Spotify turning a corner, or are these increasing losses a sign that streaming music services are not working for artists or the companies themselves?

Spotify just filed documents for its 2016 accounts in Luxembourg which reveal that the music streaming service is both in an unhealthy and healthy position. It all depends which way you look at it.

If you're a glass half full person you'll revel in the knowledge that Spotify's revenue grew by a mor than respectable 52% in 2016 to $3.3 bn USD. If, however, if you've in a glass half empty mood the overall net losses of $597 million USD don't make for good reading. That, by the way is a 133% increase on the loss from the previous year. 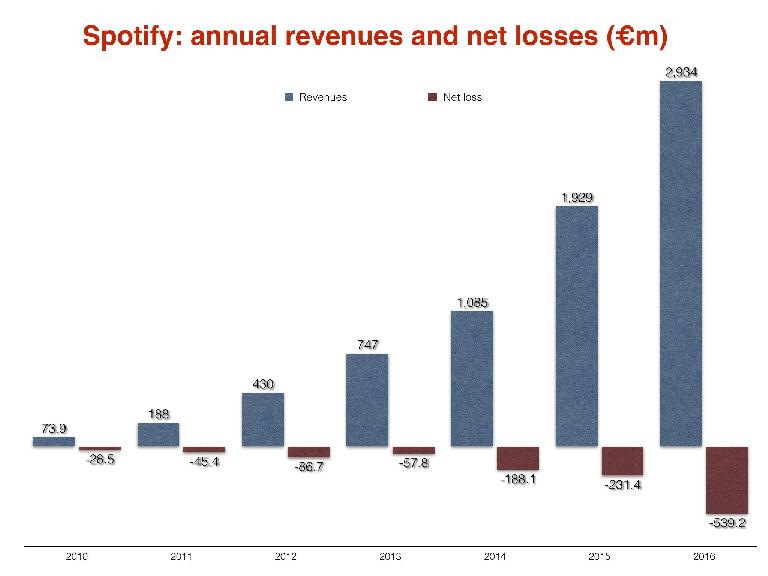 So Is This Good, Or Bad?

According to Music Business Worldwide Spotify's operating loss in 2016 was $387m, 48% higher than 2015 and "was caused by business basics – such as investments in product development and growth, in addition to a €2.48bn ($2.7bn) cost of sales (mainly spent on royalty payments to labels and publishers)."

Our first question when taking these figures into account, particularly the widening gap for losses between 2015 to 2016, is whether Spotify are building a sustainable business that can exist on a long term basis. But when you realise the net losses are just over half a billion but revenue is over $3 bn it puts their business model in more perspective. 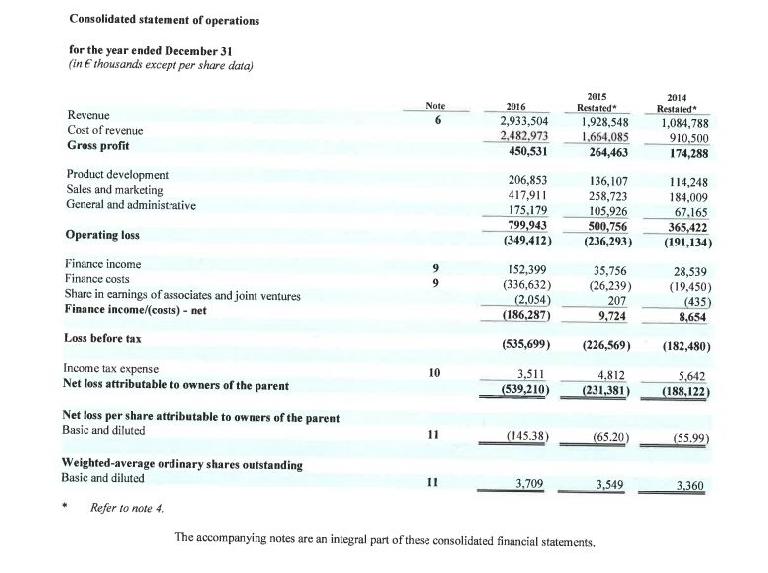 Plus, $373m of the operating loss was due to "finance costs" and included the cost of a debt that was paid. According to Music Business Worldwide Spotify's "operating loss as a percentage of revenue was 11.9% in 2016 – versus 12.3% in 2015." So, they're going in the right direction.

How Does Any Of This Affect Musicians?

What interesting stats can we garner from this info? Well, it means the average employee at Spotify received a wage value of $118k last year. We imagine a few executive salaries has pushed that figure up.

So, another big question we, and I suspect YOU, will have in light of this, is, exactly why can't artists and content creators get more?

Do you find it shocking that Spotify employees earn the amount they do while artists earn very little per play? As an example, and Spotify were closer to the lower paying in this category, in 2015 signed artists received $0.001 per play from Spotify. YouTube offered $0.003 and Tidal $0.007.

There is the argument that Spotify makes money from the content, so that content should be appreciated with higher royalties. On the other hand, if digital album and single purchases continue falling then streaming services like Spotify and Tidal might be all that's remaining for musicians. However, many are currently experiencing success by going the vinyl, cassette and live gig route for an income. Physical sales are on the up after all.

Whatever your opinion, it looks like Spotify is continuing to grow its revenue and streaming service despite the net losses. How their success will eventually translate into benefits for artists is still uncertain, but we wouldn't advise music makers to hold their breath in anticipation of rising royalty amounts from music streaming services.

Learn all about making money from your music, royalties, and more in the AskAudio Academy. It's a subscription service that is fair to our awesome content creators and you the valued customer.