Logic has a number of options for dealing with the stereo image of a mix, some obvious and some that it would be easy to miss of you weren’t familiar with them. Let’s take a brief look at the various imaging tools Logic has on tap.

Of course the most obvious stereo image-related control is the familiar Pan knob in every Channel Strip. With mono channels, this works as expected, placing the track at any (phantom) position between the left and right speakers—a standard component of every stereo mix. But on stereo tracks the Pan knob has some additional options that may require a little explanation.

A right-click on the Pan knob in a stereo track pops up a short menu; the first two items in that menu are Stereo Pan and Balance—by default the knob is in Balance mode, and for many years this was the only option for stereo tracks. In Balance mode, the Pan knob is not really a Panner at all—instead it’s just as labelled, a balance control that adjusts the relative level of the left and right channels. If you turn it to one side the image will move to that side, but that happens because the other side is being reduced, not moved, so you’re hearing less of that other side. With a mono channel Pan knob panned all the way left or right you’ll hear the entire signal at that position; but with a stereo channel Balance knob all the way left or right you’ll hear only one channel—left OR right—rather than the entire stereo signal narrowed to mono and moved to one side, which is what many people want and expect when panning a stereo channel.

A stereo balance knob is not really intended for panning the image, its main purpose is to correct for any imbalances in the stereo soundfield. So if, say, the snare and kick in a stereo drum track were a little too far off-center to one side or the other, the Balance knob could be used to center them as desired.

But often a mixer wants to actually pan a stereo signal—for example, a stereo piano may need to be panned over to the left, to keep it out of the way of drums and bass in the center, but the mixer still wants to maintain a stereo image, even if it is narrowed to between left and center (as opposed to full stereo between left and right). Configured as a Balance control, this won’t work—”panning” to the left will reduce the level of notes on the right side of the stereo image, changing the musical part unintentionally. In the past, Logic users had to turn to a dedicated plug-in to do this, but then Apple introduced the Stereo Pan option, making it much easier, and bringing Logic more in line with other DAWs that offer true stereo panning.

With the Stereo Pan option selected for Logic’s Pan knob, Logic offers true stereo panning—the ability to pan a stereo image anywhere in the stereo sound field. Many other DAWs employ two pan knobs to accomplish this—one for left, one for right—but Logic provides an elegant implementation with just the one Pan knob that includes all the same functionality.

With true stereo panning, it’s possible to maintain a stereo image while moving it anywhere between the left and right speakers. Naturally if a stereo track is panned, say, halfway to the left, the stereo image will necessarily narrow, extending only from hard left to center, but it will still be stereo—the image will still be wider than a mono signal panned halfway between left and center, and the benefits of stereo—greater width in the mix, more openness and clarity—will be maintained.

In Logic’s Stereo Pan mode, the image can be panned toward one side by dragging the green ring from one of its small white handles—as I noted above, the image will narrow, but will still be stereo. You could also keep the image centered but narrow the stereo spread by clicking in the green and dragging. And if a stereo image has been narrowed, you can pan it in either direction by dragging vertically from the top of the green ring. And a Command-click will reverse left and right, turning the green ring orange—you can then do all the same panning moves with the reversed image. As always, an Option-click restores the default setting—full, centered, normal stereo. 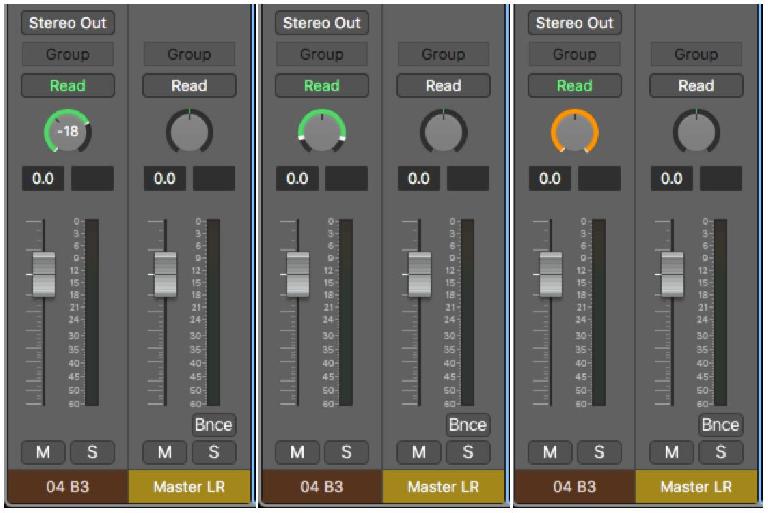 There’s even a third panning option—Binaural Pan—intended primarily for headphone listening, but I won’t have room here to get into that here; it works in conjunction with the Binaural Post-Processing plug-in, and would probably take a whole article to explain fully and properly.

Before Logic introduced the Stereo Pan option, the only way to accomplish true stereo panning was via the Direction Mixer plug-in, and that plug-in is still available, though mostly for legacy Project compatibility now. However, it does include a couple of features in addition to its basic stereo panning/width capabilities.

A newly-added feature is a Frequency-Split option—a crossover lets you divide the frequency range at a chosen frequency, and apply independent stereo panning to both the high and low frequency ranges. A useful example could be splitting the lows and reducing them to mono—this is commonly done for vinyl distribution, to make sure strong bass on one side doesn’t cause too much excursion of the stylus, resulting in skipping during playback. 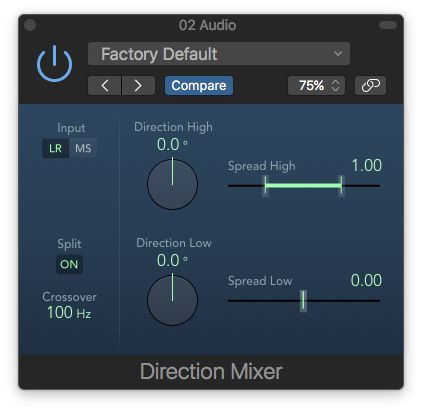 The other option the Direction Mixer offers is independent processing in MS mode—that may require some explanation.

MS—or Mid-Side—mode is an alternative to normal left-right stereo. A regular stereo signal is matrixed into sum and difference channels: the sum—M, or Mid—is both L & R channels combined into mono; the difference—S, or Side—is the L & R phase-reversed. The Mid channel contains everything, with center-panned elements more prominent; and the Side contains just elements panned to one side or the other, and diffuse stereo signals like reverb and ambience. It’s the same stereo format you get when using MS miking techniques.

Logic now offers the option to convert any stereo plug-in from normal LR stereo operation to MS stereo—this is accomplished via the Dual-Mono plug-in feature. Instantiating a stereo plug-in as Dual-Mono provides independent processing for the Left and Right channels, and if it’s switched to MS mode, you have independent processing for the Mid and Side channels. 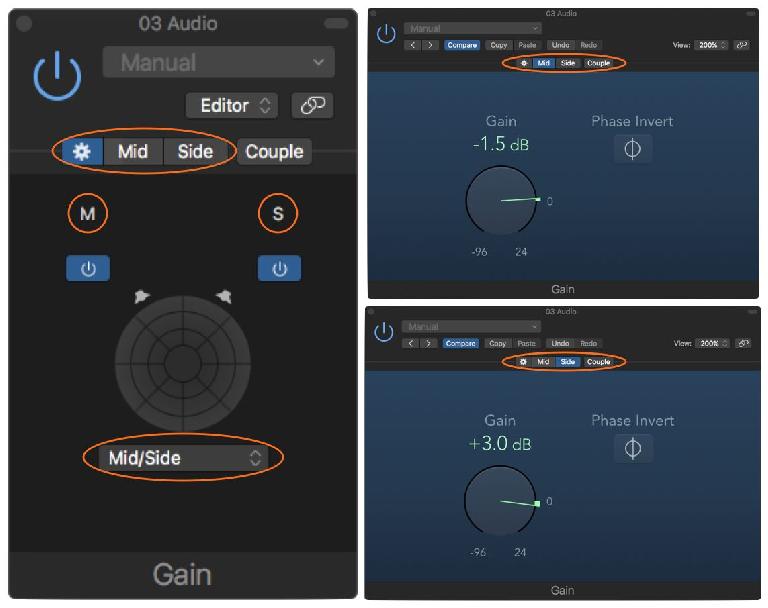 MS stereo provides full mono compatibility—still an important consideration—and it’s used universally for vinyl records. In mixing, MS allows for independent processing to the centered/mono elements of a mix, and to the side-panned elements and the ambience. So for example, adding highs to just the Side channel of a stereo drum track could brighten up hihats and cymbals—typically on the sides of a stereo drum mix—without overly brightening up the snare and kick, preserving a warm sound for those center-panned drums.

As far as imaging applications, one of the most basic uses for MS stereo is stereo image control of a full mix—this is a classic mastering technique. Adjusting the balance of the Side signal against the Mid signal can narrow or widen the stereo image. The simplest way to do this with Dual-Mono MS mode in Logic is to implement it in a basic Gain plug-in. Now if you lower the level of the Side, the image will narrow, eventually all the way to mono. This can be handy for mixes that have elements that are too widely-panned, though of course it’s also possible with the new Stereo Pan knob, as mentioned above.

But you can also widen the image with MS, by increasing the level of the Side channel over the Mid. By cranking up the side-panned elements—the difference components, everything not common to L&R—the stereo image will widen, and since (stereo) reverb and ambience are primarily Side components, the overall “wetness” of the mix will increase as well. You can really only apply a few dB of this before you run the risk of an overly-diffuse stereo image and mono compatibility problems, but applied subtly it can be a useful option.

A stereo image widened via MS (Side channel boosted): original (4 bars); then widened

Besides stereo panning and width control, Logic has another specialized imaging tool, the Stereo Spread plug-in. This creates a stereo image from a mono signal. Many engineers may know that this can also be done with phase manipulation, but that technique should be avoided in mixing, because it can cause severe phase cancellation problems when the mix is inevitably heard somewhere in mono. In a worst-case scenario, a track that’s been “stereoized” by flipping the phase (polarity) of one side could disappear from the mix entirely in mono playback—it’s happened. 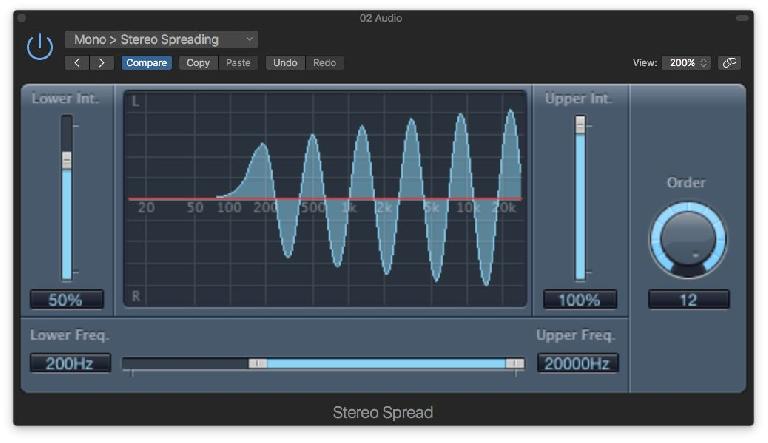 A mono signal is divided into several frequency bands, and these are alternately panned to left and right. When the signal is heard in stereo, the image is widened—it’s a fairly diffuse stereo image, but it can be effective, especially on pads, strings and keys, nicely filling in stereo space.

The Stereo Spread plug-in on a mono piano: mono (4 bars); then artifical stereo

And if the mix is heard in mono, the alternate frequency bands simply combine for the normal tone. The only caveat is that if someone hears the signal in stereo while sitting too close to one side, the tone of a Stereo Spread track sound be a little off, but you can tweak the intensity of the effect when setting it up if you’re worried about that.

So there are a number of image processing tools in Logic that every mixer should be familiar with, for both basic panning and balancing to stereo image manipulation and creation. As I said up top, it’s easy to miss some of these features, so if any of these tools were new or unfamiliar, it’d be a good idea to play around with them a bit—they may not be as sexy as some of Logic’s other plug-ins and processing toys, but they can be invaluable for many stereo mixing situations.

Dream It. Do It.
Do you want to learn Mixing EDM Tracks?
Yes, I want to learn!
No Thanks, I just want to read the article.
Feedback
How are we doing?
We'd love your thoughts, feedback and questions regarding our new site. All feedback is appreciated!
We do not respond to this form! If you need support, please visit our support page.
Thank you for your input!
Your message has been successfully sent
Course Advisor
Don't Know Where To Start?
Ask A Course Advisor