All Articles Audio Software
Stylus RMX Kit Mode Explored
Toby Pitman on Thu, September 15th 0 comments
Language
Stylus RMX by Spectraonsics is widely acclaimed as one of the best drums & percussion modules around. But many haven't explored its Kit mode which brings a host of new possibilities to the table.

It's very easy to forget sometimes that Stylus RMX, with all its fantastic loop material, is also an extremely powerful drums sampler. What I'm talking about here is Kit Mode.

I really think this is a widely overlooked feature of RMX and one that can't be ignored for too long. With over 3,000 supplied Kit Modules (more on this later) the scope for building custom kits is almost unfathomable, never mind the 250 professionally-designed kits that ship with Stylus and cover a wide range of electronic genres.

Let's have a look at what Kit Mode has to offer.

Inside the Mixer you'll see the Mode buttons. Multi Mode allows for Grooves to be loaded into the 8 available slots in RMX. Switching to Kit Mode allows you to load up to 8 Kit Modules into the slots. 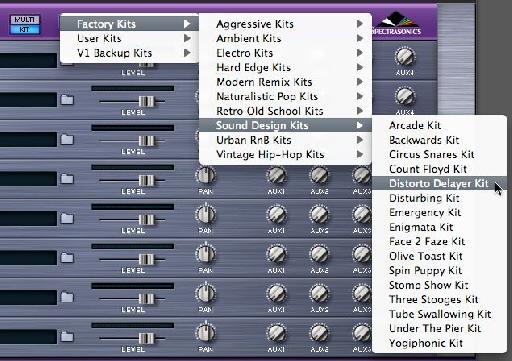 These Kit Module elements are the same samples that you would find in the Sound Menus category in Multi Mode. Instead of loading in a bank of samples (say '˜Aggressive Snares') you are basically able to load in individual sounds from that Suite. If you see a  <> symbol next to the element, it means that the module contains a multi-sample set, usually a variation of the same sound. 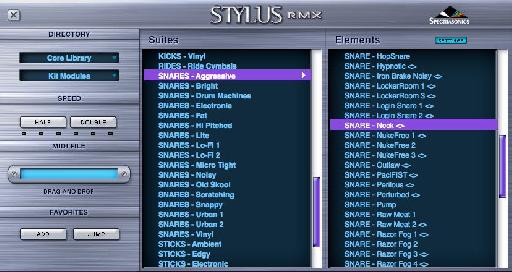 Not only will this save you a heap of memory but you can also see what Groove Suites these hits were taken from, which makes matching sounds a lot easier.

Kits are mapped out using the General MIDI standard. So, by loading in a KICK module the sound is automatically mapped to B0 and C1, SNARES to D1 and E1 etc. This is very handy as it allows you to audition sounds within a programmed MIDI part without having to remap any MIDI notes.

You can also choose from three MIDI modes where parts can be triggered from either a single MIDI channel (Ch1 or the GM Standard Ch10) or from individual channels (1-8).

Layering sounds in Kit Mode is probably one of its best features. This is mostly due to the way sounds are mapped. If you have a Kick in Slot 1 and you load another Kick in Slot 2 it's automatically mapped to the same keys.

This allows not only for really fast layer auditioning but allows you to create some of the fattest drum sounds around. Here are three kicks layered up:

All Kit Module slots obviously have access to their own Stylus synthesis engine. This means you can easily sculpt your kit sounds with Envelopes and Filters. You even have access to the Chaos engine for each sound too, which can make for some cool stuff.

Lastly, let's not forget all of RMX's great FX, too. With all these powerful features at your fingertips it's easy to create custom kits in a matter of minutes. 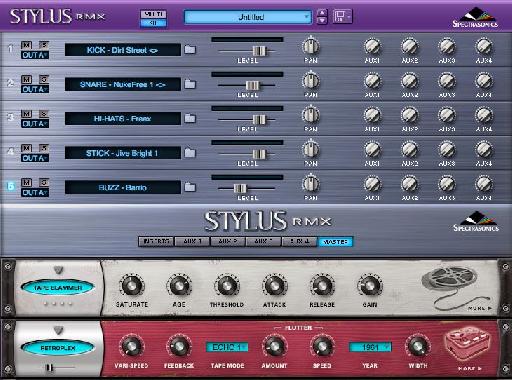 Stylus RMX really is the plugin that keeps on giving and could well be the only piece of electronic drums software you'll ever need. If you haven't yet tried out Kit Mode in Stylus then get involved! A world of drums heaven awaits!

Want to learn more about the other excellent plugins by Spectrasonics? Check out these Trilian and Omnisphere tutorials on macProVideo.com.