All Articles News
The Enso Looper Plugin Is New From Audio Damage
Hollin Jones on Sun, March 17th 0 comments
With a full automatic looping engine, digital and traditional tape loop modes and much more, this could be the only looper you ever need. Here's the details.

Audio Damage has announced the availability of Enso, its latest plugin effect for Mac, PC and iOS. An architecturally unique and sonically characterful looping toolkit for producers and live performers, inspired by both modern looper pedals and vintage tape-based setups, Enso combines elegant and intuitive UI design with a deep but accessible feature set and stellar sound quality. 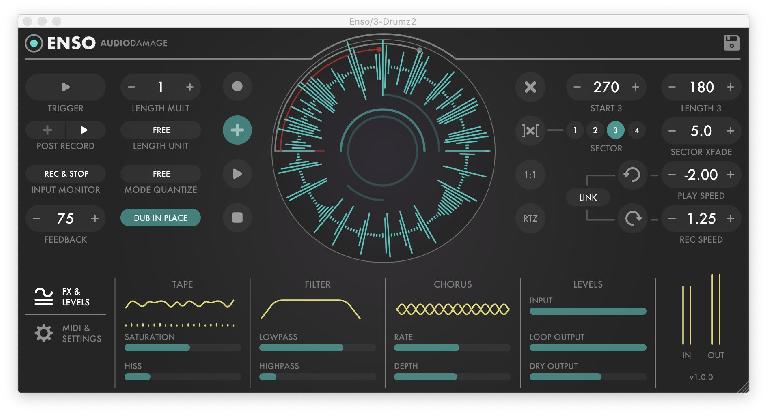 Enso’s operation will be immediately familiar to users of hardware looper pedals or plugins such as Ableton Live’s bundled Looper. Start playback of the host DAW, hit Enso’s record button and capture your instrumental performance into a loop of whatever length you like, up to ten minutes (five minutes on iOS). Then, without stopping playback, overdub further passes to create layered grooves, complex harmonic textures, or dense, evolving soundscapes.

Beyond those basics, though, Enso takes software looping into new territory. Two Overdub modes configure the plugin for conventional looper pedal behaviour or Frippertronics-style ‘dual tape deck’ manoeuvres, affecting the handling of the Feedback parameter for an endless range of layering possibilities; and up to four Sectors can be effortlessly defined, each with its own start and end points, for on-the-fly rearrangement of the loop.

Giving you everything you need for limitlessly creative looping, on stage and in the studio, Enso is one of Audio Damage’s most beautifully realised plugins yet, and an empowering addition to any musician’s arsenal of effects.