All Articles Pro Tools
The History Of Mastering Explained From Tape To Pro Tools
Hollin Jones on Wed, March 13th 0 comments
Why is mastering necessary, and how did it change with the move from vinyl to digital? Joe Albano reveals all in this short video.

Mastering is the vital final stage of the music production process, and Pro Tools is one of the industry's most widely used tools for carrying it out. But how much do you know about why we master, and why we use the techniques we do? In this short video from the course Pro Tools 105: Mastering Essentials, Joe Albano explores where the concept came from, and how it has evolved over the years.

Going back to the early days of production, Joe explains that mastering was initially a way to ensure a consistent sound when transferring audio material from tape in the studio to vinyl, for playback by record buyers. As time went on and digital formats began to develop, mastering became less of a simply technical exercise and more of a creative process. It wasn't just about transferring media any more - changes to the sound would actively be made during mastering.

These are just a couple of the gems you'll learn from this video, and be sure to check out the full course using the links below, for a comprehensive guide to mastering music in Pro Tools. 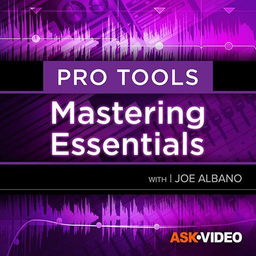 Dream It. Do It.
Do you want to learn Mastering Essentials?
Yes, I want to learn!
No Thanks, I just want to read the article.
Feedback
How are we doing?
We'd love your thoughts, feedback and questions regarding our new site. All feedback is appreciated!
We do not respond to this form! If you need support, please visit our support page.
Thank you for your input!
Your message has been successfully sent
Course Advisor
Don't Know Where To Start?
Ask A Course Advisor