All Articles Logic Pro
The Joys, And Benefits, Of Building Templates In Logic Pro X
Joe Albano on Wed, June 7th 0 comments
Templates in Logic - and any DAW - can save you a bunch of time setting up and let you get straight to the business of making music. Joe Albano explains how they work.

Some DAW users start each session or project by opening a blank session and adding tracks and processing as they go, but many others - especially more experienced users - prefer to work from a template (or templates), where a basic layout of tracks, instruments, effects, and other go-to elements has been pre-set. 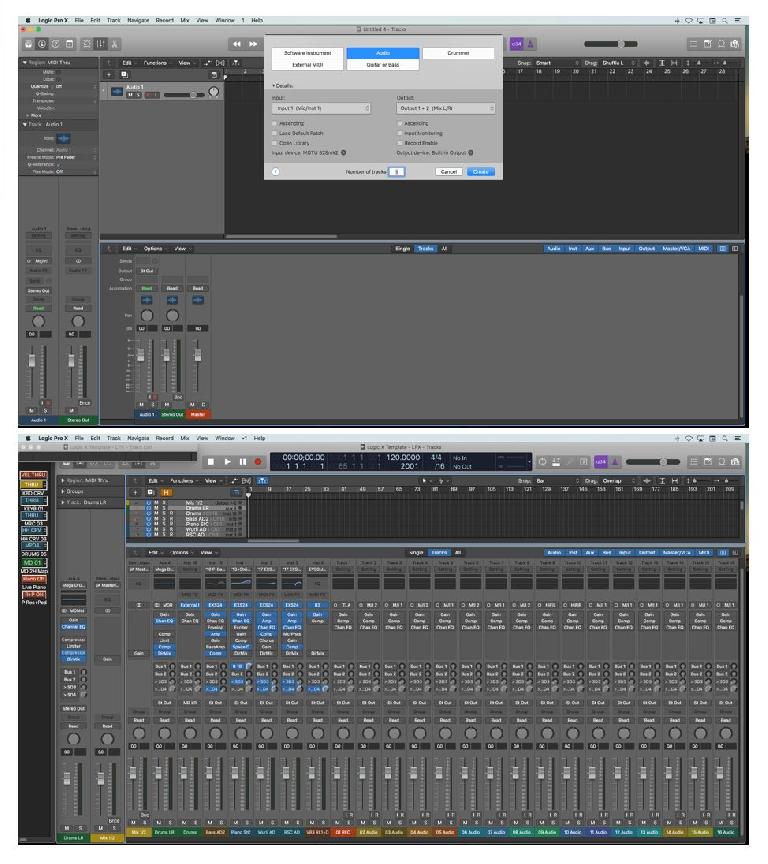 A blank new Project (top) vs a user template (bottom)

If you tend to have a consistent approach to most projects (at least projects of a certain type), a template can let you get right to work on creative tasks, instead of having to continually devote energy to configuring the workspace. And of course, if your work spans different musical styles or includes both music and post-production applications, there’s no reason not to have multiple templates, each one optimized for a different type of production.

Logic users in particular can take advantage of that application’s many options for customization to fine-tune their templates into dedicated environments for the various types of session work they do. In fact, for those who may be new to DAWs - or just new to Logic - the program offers some factory templates for different types of projects. If you haven’t yet settled on a specific layout or workflow, but don’t want to start from a completely blank slate, you could try one of these. Of course, eventually you’ll develop specific preferences for your work environment and start creating your own. So what kind of custom settings would typically be saved in a template? Here are just a few things to consider when setting up your own custom Logic Project templates.

First off, a custom template (older versions of Logic called it an “Autoload”) is created by using the Save as template... command. By default, custom templates are saved into a dedicated Project templates folder in ~/Music/Audio Music Apps. Depending on your Logic startup Preferences, opening Logic can automatically open a particular template of your choosing, or prompt you to choose one from the factory or user options. 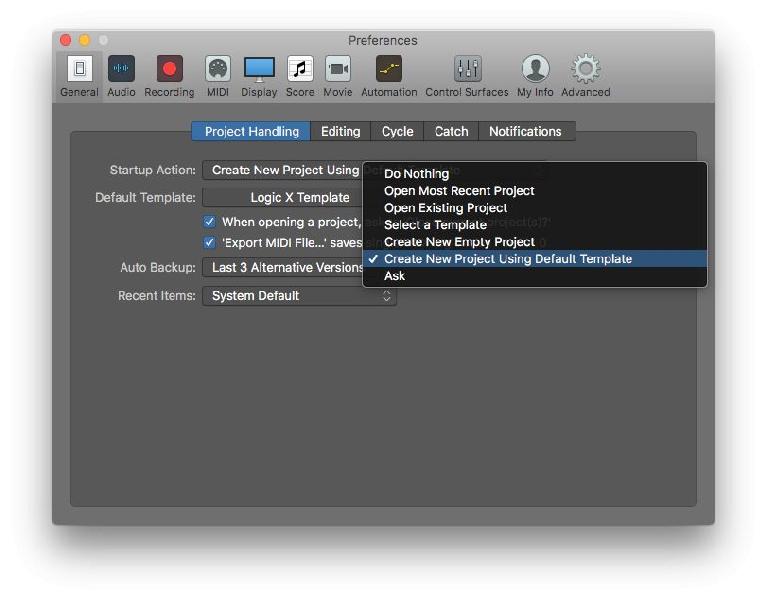 Since a template is a Project file, any custom settings you want to make must be Project settings - loading a template won’t override global Preferences - so if you’re relatively new to Logic, you might want to go through the Preference and Project Settings windows, to see what can and can’t be customized in your templates. That said, most key aspects of a custom work environment can be stored in a template. 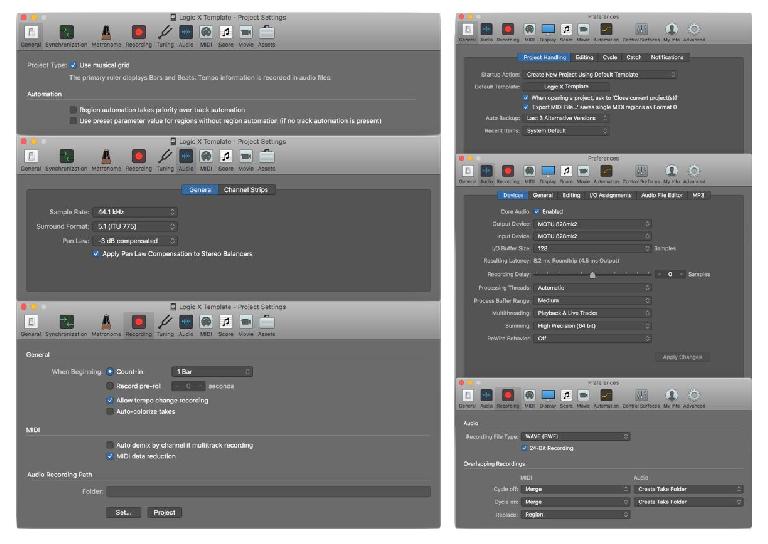 Project Settings (L) which can be saved as part of a custom template, vs Preferences (R) which are global

Obviously, one of the main reasons people use templates is to have a pre-set collection of tracks and Virtual Instruments available as soon as the Project opens, and a mixer that’s ready to go. You might not want to clutter up the main (arrange) window with too many tracks at the outset of a project, but once you’ve been working for a while, you’ll probably have a good idea about how many tracks you’d like to start off with, and what they should be. Those who use Virtual Instruments in their work often like to have at least a basic set of their preferred Instruments loaded up and ready to play. So in a template suitable for, say, acoustic songwriting, you might want to have a basic virtual rhythm section - drums, maybe bass, keyboards - along with several audio tracks intended for guitar parts and vocals.

With the advent of Logic’s Patch format, it’s now easier to move complex Instruments and channel strip setups between Projects, but there are still some cases where having them already there is a virtual necessity. I have a number of custom Instruments in a template that utilize Environment cabling, which can’t be saved in a Patch or easily imported from another Project file. Even if I don’t use them in every project, having them in the template, set up and ready to go, is the only way to be able to access them without the session grinding to a halt while I go through an elaborate setup/hookup routine.

I also have an Environment patch that provides some custom MIDI control for incoming MIDI signals, like adjustable velocity curves. This comes in handy when I use the custom Instruments in my template at another studio, with a keyboard that has a very different response (which can make more dynamic sounds hard to control musically). MIDI plug-ins do also offer this, but not globally, so if I bring my template then I can match all my Instruments to a different keyboard response at the push of a button - this has proven to be extremely useful! 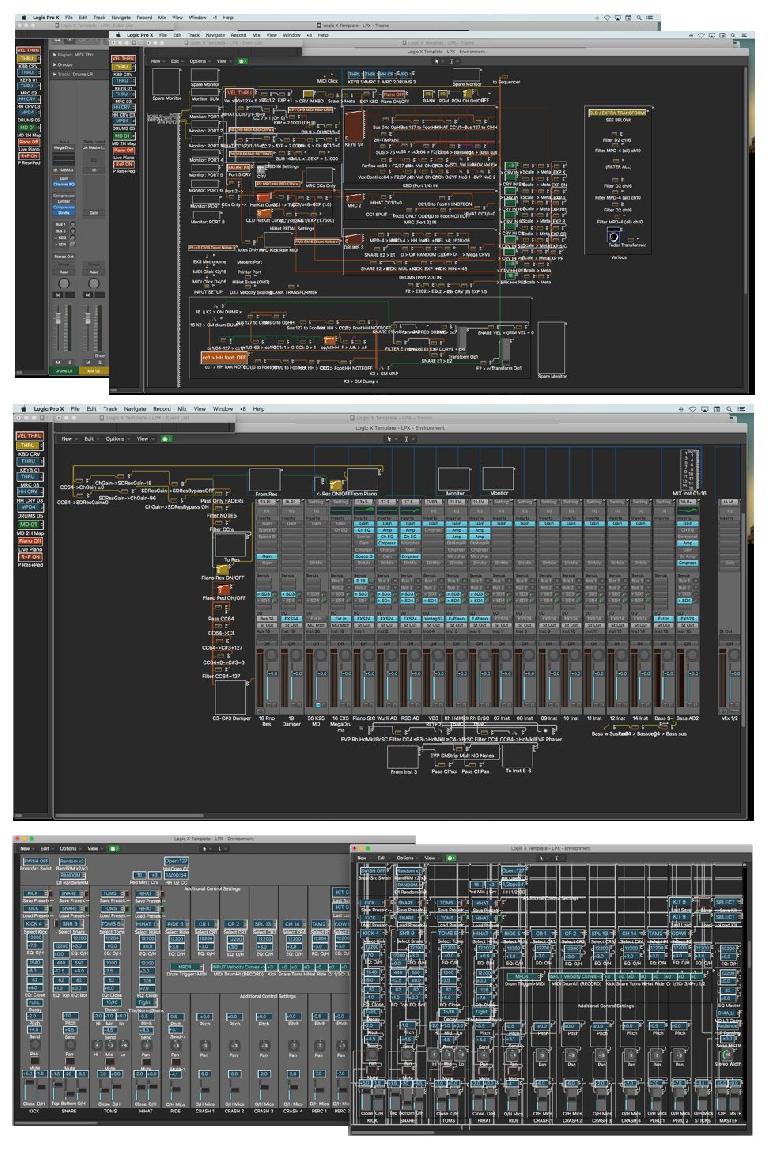 One of the reasons I prefer to work from a template is that I like to have the mixer layout already configured, with a preferred track order and all standard routings already in place. Aside from having audio and Instrument tracks already set up, I don’t want to have to create a bunch of Auxes, instantiate effects (typically 2 or 3 reverbs and maybe some other fx), and create and route the appropriate Sends every time I open a new Project. So my template(s) all have a full complement of Send & Return Reverbs & FX already set up, with the appropriate Sends already in place on all the tracks included in the template.

Of course, there are some shortcuts to setting this up - you can select a group of tracks and make Send settings all at once, and Sends can be saved in Patches - but having them all there in the template is still a great time-saver, especially when you’re feeling inspired and want to open up a new Project and just jump right into creative work.

In my template(s) lot of my preferred Virtual Instruments also have a number of effects instantiated, and if I have certain audio tracks intended for specific use, they might have some effects instantiated as well - for example, audio tracks meant for DI electric guitar parts would likely have maybe a tuner, an effect rack (Pedalboard) and a favorite amp sim or two loaded. Remember, effects that are part of a template don’t have to be active - they can be instantiated but bypassed, so favorite effects that I might be likely to use are at the ready, but initially the track is dry - a little thing, but all of these small time-savers can make a difference.

For me, a big part of setting up a template is customizing the workspace visually - something Logic excels at. In addition to the multi-paned main window, Logic’s Screensets let you customize groups of windows onscreen (including open plug-in panels), and save and recall various layouts at the push of a button, and different templates can benefit from customized visual layouts targeted to specific tasks. For example, a template for video work could be saved with at least one Screenset with Global tracks open (for the movie timeline), a large SMPTE counter, and other helpful video-related display elements, for quick and easy access at different parts of the production. 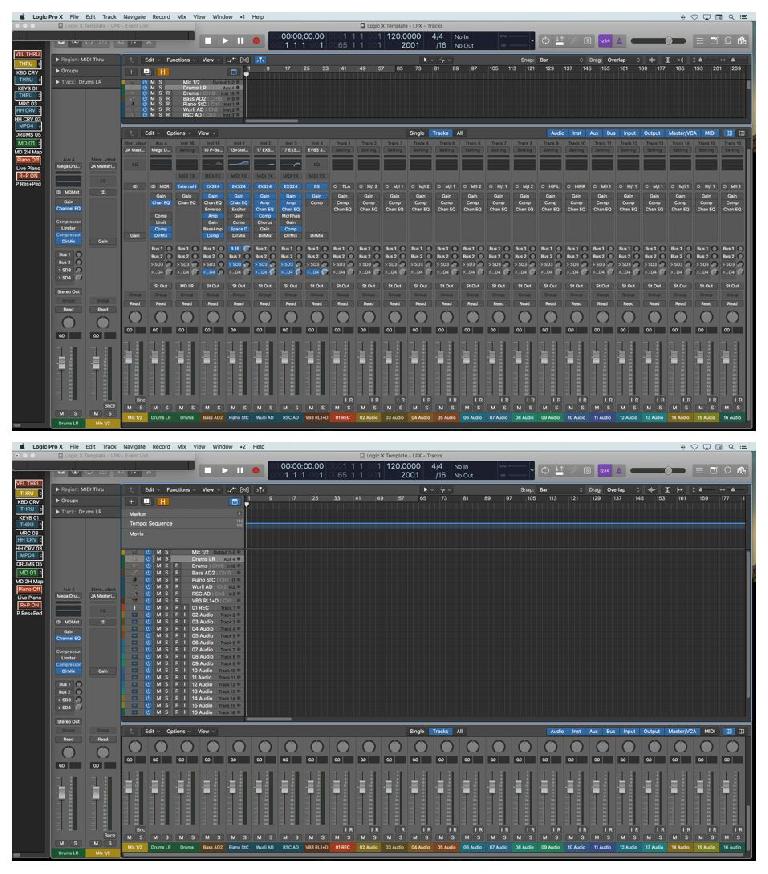 If you want to include a fairly large number of tracks in a template, but don’t want the workspace to be too cluttered with tracks not (yet) in use, you can use the Hide feature to hide any extras, displaying them only when/if you decide to use them. For example, Virtual Instruments in a template that I want to have at the ready, but I don’t use in every Project, are just kept hidden - that way when I do need one, I don’t have to go through an elaborate load/setup routine, I can just un-Hide it, and start playing. (I do keep hidden Instruments bypassed, and hidden tracks’ Power buttons off, just as a hedge on any additional load on resources, though with Logic that’s never really been a problem).

It might seem like you’re only saving a few seconds here and there by having a lot of things already set up in a template, but those few seconds, over the course of a long, complex project, can begin to add up - not to mention the effect on a session’s creative momentum every time there’s an enforced pause for track/instrument/effect creation and setup. So if you’re still starting each new project with a blank slate, but you’re feel like you’d rather have your own custom workspace already configured, then maybe it’s time to whip up your own template - or templates - and get back to focusing on the creative side of audio/music production.

Learn Logic Pro X from beginner to advanced in the AskAudio Academy.
Related

Dream It. Do It.
Do you want to learn What's New in Logic Pro X 10.3?
Yes, I want to learn!
No Thanks, I just want to read the article.
Feedback
How are we doing?
We'd love your thoughts, feedback and questions regarding our new site. All feedback is appreciated!
We do not respond to this form! If you need support, please visit our support page.
Thank you for your input!
Your message has been successfully sent
Course Advisor
Don't Know Where To Start?
Ask A Course Advisor