All Articles Logic Pro
The Magic of White Noise in Logic Pro
David Earl on Tue, January 31st 0 comments
Language
White noise has many creative uses, from snares to kick drums and even lead sounds! Logic expert, David Earl, explores of all these in Logic Pro's ESP instrument.

White noise. We’ve been assaulted with it sometimes when flipping channels on our televisions. We’ve heard it on the radio when we can’t find a station. We’ve done everything we can to keep it out of our recordings.

Well now, I’d like to explore what it can do for us when we get creative with it!

For our purposes, let’s open up Logic, create an empty project, and add 4 software instruments with ES P synth on them. 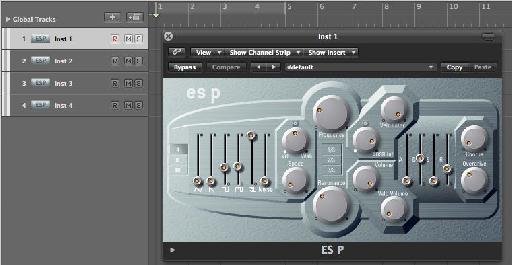 The ES P is a simple additive synthesizer that can create up to 6 tones at once. We are going to turn the volume down for all of the tones except the noise generator. 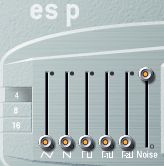 Not great, right? We can hear how the envelope is attenuating the volume over time. The filter is not affected by the ADSR envelope because our cutoff is all the way up.

To hear the envelope’s effect on the filter cutoff, turn the cutoff back down.

Interesting! We already have something that sounds drum-like. Check out the velocity sensitivity as well. As we play, the drum changes timbre according to our velocity.

Controlling the ADSR envelope’s effect on the cutoff of the filter is determined by this set of knobs.

ADSR Int represents the intensity of the envelope’s effect on the cutoff of the filter. We can see that the ‘0’ point for this parameter is the ADSR Int knob’s center position. This means that we get positive influence of the envelope to the right, and an inverted effect when we turn the knob to the left.

Velocity’s influence on the intensity of the ADSR envelope will increase and decrease depending on velocity.

As you can hear, we are already getting a nice bass drop. This is happening because the resonance is so high that our noise generator is playing a very small number of frequencies around the cutoff point. This makes the noise sound more like a sine wave oscillator!

To shorten the drop, and give us a more percussive sound, turn the decay stage of the envelope down.

This gives us a short, low kick drum.

There is some clicking at the beginning of the sound. This is because our attack stage is so short. Play around with the attack stage of the ADSR envelope to taste. If you want the kick to be more consistent regardless of velocity, adjust the ‘Velo Filter’ knob.

Whether used on its own, or laid under a more transient kick, this is a great way to get a good sub kick for your dance tunes. Add a little overdrive to give it even more flavor!

Now we are going to make some adjustments to give our ES P a bit more of a snare-like sound. Go to ‘Copy settings’ from the ES P pulldown menu. 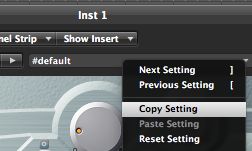 Now go to the next ES P we have in our session, and paste those settings in. 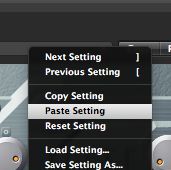 This way we don’t have to start from scratch.

Turn the resonance back on the filter. Snares are looser and take up a higher frequency range, so we’ll be adjusting the cutoff as well.

We are now going to adjust the following parameters on the envelope to get a more snare-like performance.

Note that the release is up slightly. This means that after the initial hit, the snare dies away more naturally after we let go. Take the ‘Velo Filter’ down as well to give more consistency to the snare.

Trent Reznor of Nine Inch Nails loves noise for lead sounds because of its almost sonar-like quality and the fact that it sounds as if it is already decaying. Try the following settings to create a noise-melody ESP. 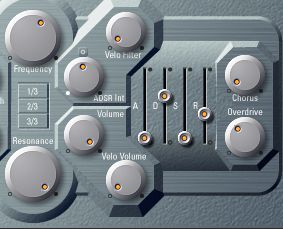 To get a reference pitch for where we are supposed to set the cutoff, add in one of the other waves. Once the noise sounds like it is in pitch, turn the other wave down.

This is only the very tip of the iceberg in terms of what we can do with our humble noise generator. If you want to get really crazy, check out the noise generator in the ES2!

David Earl
David writes music for all media including advertising, branding, movies, television, and games. He works for such clients as Sega, LucasArts, Microsoft Game Studios, Landor and Associates, Beyond Pix, Rich Pageant, and Nextel. He also teaches at an Apple Certified training facility in San Francisco called Pyramind and has long been a resource to fellow composers, producers and studio engineers who needed help with their DAWs. A few years back he created a YouTube page that had some of his most popular tips and tricks in Logic where he provided a Logic resource for other aspiring producers, composers, and engineers. This YouTube page quickly became a source of inspiration to help the Logic Studio community at large. With over 22,000 followers on YouTube he decided (and we agreed) that it was time for the "sflogicninja" to partner with macProVideo.com to create longer format, in-depth tutorials. We are excited to welcome David to the mPV team as we continue to create the most and the best Logic tutorials on the planet!
Related Videos
Comments (0)

Dream It. Do It.
Do you want to learn EVD6 and EFM1: User Guide?
Yes, I want to learn!
No Thanks, I just want to read the article.
Feedback
How are we doing?
We'd love your thoughts, feedback and questions regarding our new site. All feedback is appreciated!
We do not respond to this form! If you need support, please visit our support page.
Thank you for your input!
Your message has been successfully sent
Course Advisor
Don't Know Where To Start?
Ask A Course Advisor