All Articles Recording & Production
Using iCloud for Everyday Music Production
G.W. Childs IV on Fri, June 8th 0 comments
Apple's iCloud storage, which is available for Windows as well as the Mac, can be a great way to securely manage and organise your music sessions and other files. Here's how to do it.

iCloud can be a major lifesaver, or an amazing pain in the neck when you are producing a large amount of music. It all depends on how and when you use it. Although many people don't know, it's also availabe for Windows even if the integration isn't quite as total as it is on the Mac. In this article, I’d like to give you some of my own tips for using iCloud as a producer.

Recommended- A Shift In Perspective

When I worked within a company a sound designer, I always had a giant server with tons of space that I could use to drop my source audio, edited audio, effected audio, and basically keep a database and directory of all of my work on whichever project I was working. I never had to worry about the integrity of my work as it was always being taken care of by the very capable IT Dept also employed by the company in which I was working. Life was great!

After going freelance, I was reacquainted with external hard drives again and various online services for storing and sending audio. Audio hadn’t gotten any smaller, I just had to figure out how to store all of it myself. And I really needed a way to be able to access all of my projects from wherever, as I ceased to have a set office space. Thanks to kids, I had to become more resourceful with my time and a little more serious about guarding all of my libraries, content I’d produced for wother artists, remixes I’d created, books I’d written, interviews and more. I mean, have you ever seen what a toddler can do to an external drive?

This is where iCloud really began saving my bacon. Sure, I pay a monthly, tiny subscription ($10 a month for 2TB) but the payoff is more than worth it.  Through 2 TB a month I am able to virtually maintain all the projects for artists and companies, externally. And I am able maintain my own projects from any device, like sample libraries, singles, remixes, albums and more.

So, essentially I’m paying Apple, these days, to be my IT dept for around $10 a month. I can afford that easily!

My very first creation on iCloud, outside of what Apple had already set up for me  was an Artists folder, which I’ve continued to work out of as a professional folder for a long time. I work with multiple people and this really set me up, as I was able to create a directory that has all my people in one spot. I keep it as a root folder in my iCloud Drive, and also keep a link to it in my Favorites spot within Finder. By having it at the root, it makes it easy to locate it when I’m on my phone, when I need to forward an invoice, mp3, and so on.

This directory became a big thing for me, as I was able to point Ableton directly to an artist location when rendering out mixes, that went straight to the cloud rather than a hard drive that I’d have to lug everywhere with me. Initially, these folders were just the names of the artists with no particular sub-folder structure but over time I began to develop a pretty consistent pattern of certain sub-folders. So I created a template sub-folder structure that I’ve begun using with all my artists. 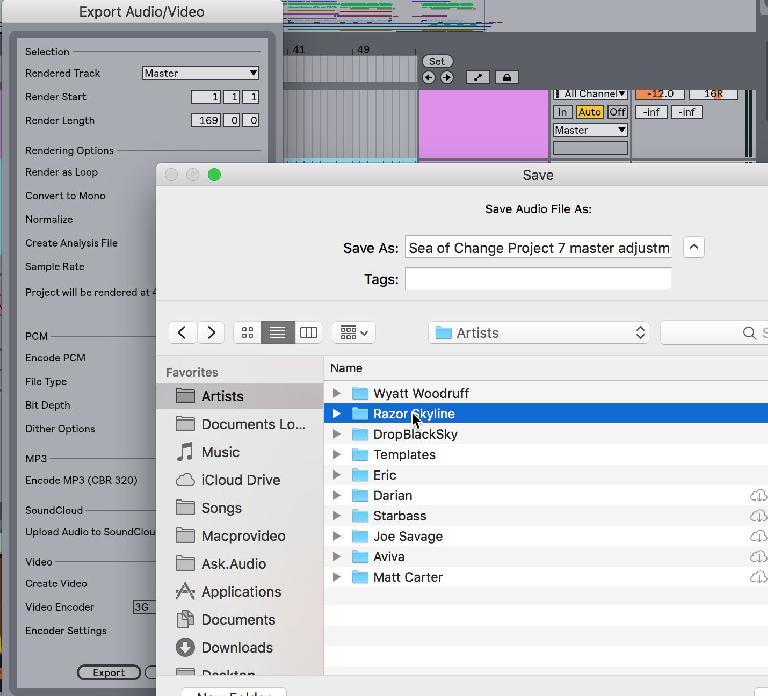 These are the sub-folders that have been extremely handy for me:

There are a few drawbacks to keeping all my stuff on iCloud. Sometimes, I’ll load up an Ableton session and I’ll get the famous “you have missing samples!” message. This means that the project hasn’t been accessed for a while and that the song directory needs to be re-downloaded. Finder will sometimes remove local copies of a directory from the internal drive when the internal drive starts to get low on space on my MacBook Pro. It especially loves to remove large, bloated Session files that haven’t been touched in a while. 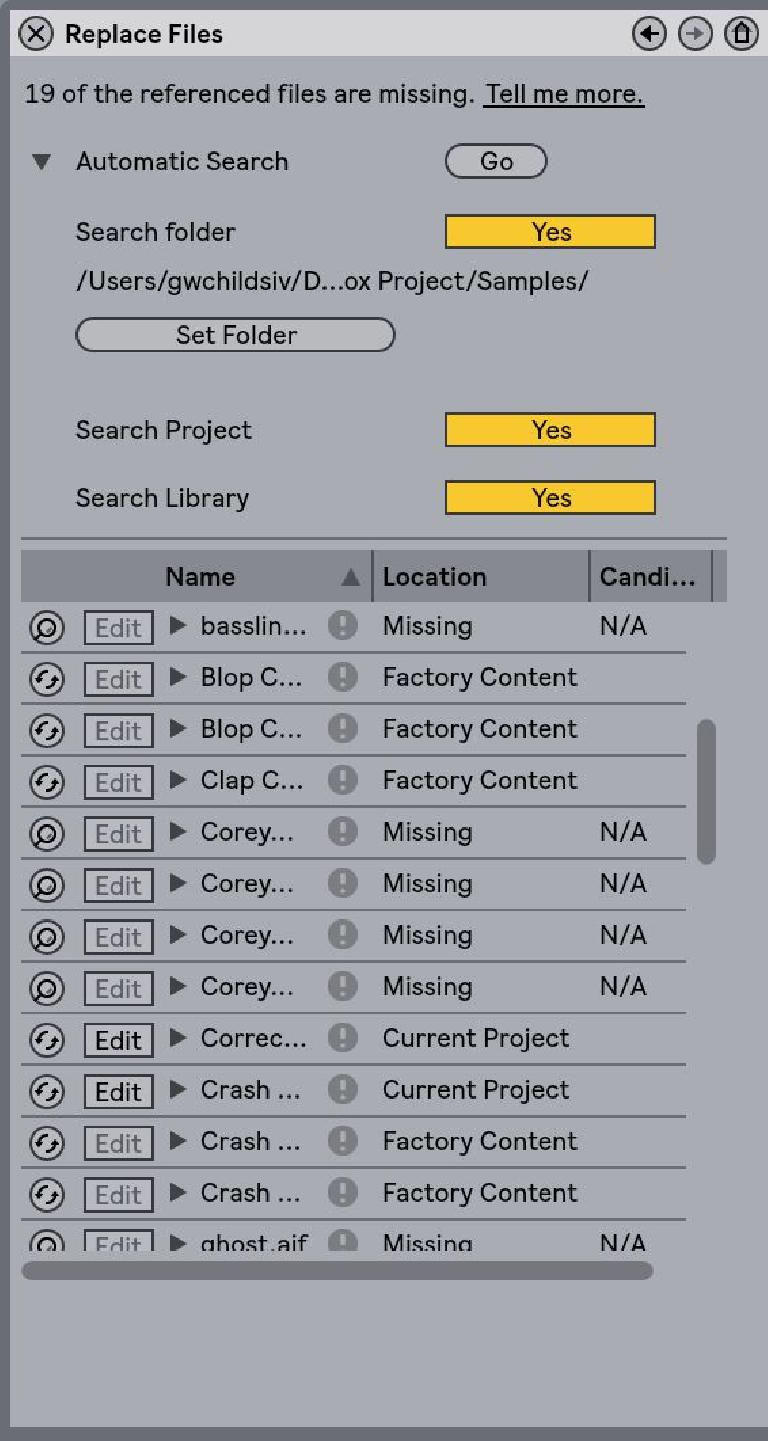 When I’ve run in to this, it hasn’t been too big of a deal as long as I had access to internet access fast enough to download the sessions I’ve needed, all files intact.
Within Finder and within every folder within Finder are small Download buttons. I can download the entire song directory of an Ableton file, for example. Then, all the samples are downloaded for each version of the song session, plus each song file. It’s very cool. You just have to wait for a minute. 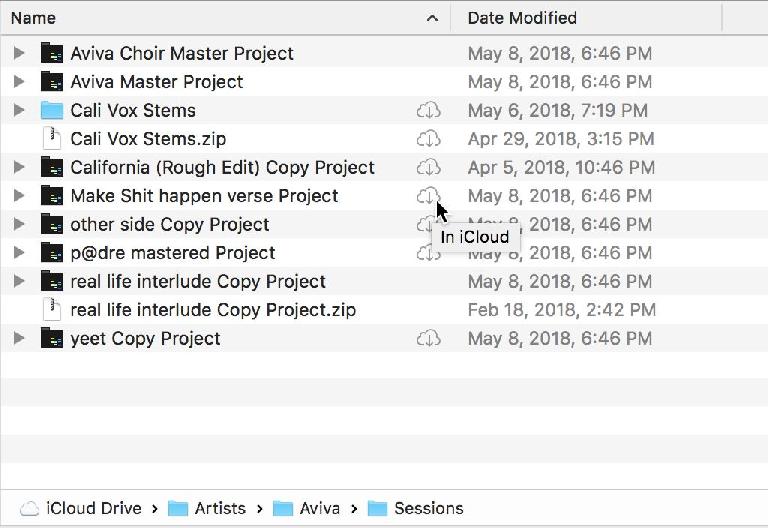 Before iCloud, I spent a lot of time stressing over where my content was being kept, as video and audio content are notoriously huge in size. Plus, if you were working on multiple machines, having to access large files over a server typically meant a lot of uploading and downloading, bogging down network speed.
While this content size is still as big of an issue as ever, thankfully Apple has kept iCloud storage pretty inexpensive. And because Cloud saved files are seamless between iCloud and the machine these days, all I really need be concerned with is downloading files, and adding to the files. Finder and iOS take care of the rest of the work, acting as my artificial IT dude, removing local files that I haven’t used in a while, while still keeping them up on iCloud within easy reach.

If you aren’t currently using iCloud in your regular production life, I’d caution you to reconsider, even if you’re just backing up to it. If you are using iCloud, I’ll raise both thumbs for audio and video usage. However, I would like emphasize keeping an external backup around just in case. We live in strange times, you never know what’s safe these days!