All Articles Audio Software
Using Soundtrack Pro as a Batch Processor
David Earl on Fri, January 20th 8 comments
Language
While Soundtrack Pro is only available in the current boxed version of Logic Studio, it is still a useful audio editor to use! David Earl (aka sflogicninja) shows how to use it as a batch processor.

Soundtrack Pro is one of the most powerful and under-utilized apps in the Logic Studio suite. Many folks who open it up for the first time think that Soundtrack Pro may be redundant, since Logic is going to be the go-to tool for multitrack audio production.

Soundtrack Pro started off as a post-production tool in the film industry. Not only does it have a very capable multitrack audio editing and mixing system, it has a phenomenal 2-track audio editor as well. I liken it to '˜photoshop for audio'. It deserves respect! 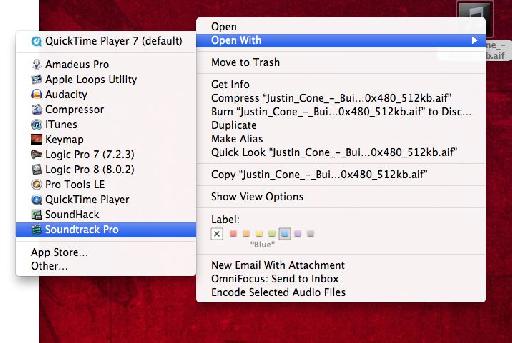 You can also open an audio file in Soundtrack Pro directly from a Logic session by using the key command Shift-W.

Once in Soundtrack Pro, we get a classic 2-track audio editor: 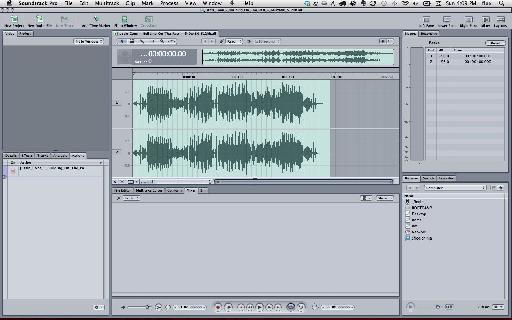 To add an effect, use the key command Command-A to select all of the audio file, and go to the '˜Process' menu. We're going to choose '˜Reverse': 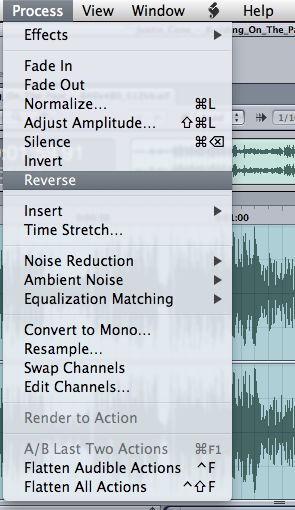 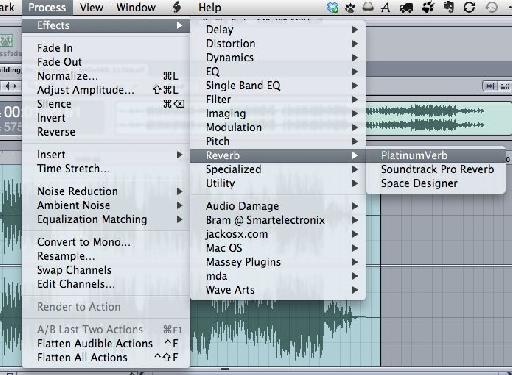 Now we see the reverb plugin. To apply the reverb, choose '˜Apply' in the lower right hand side of the plugin window.

Next, let's reverse the audio again! Press the spacebar to hear the new reverse-reverb effect.

On the left-hand side we are shown a list of the processes we are applying. Feel free to re-order the list of processes. It will re-process the file and you can hear reverb before reverse, after reverse, or un-check the box, and we get no reverb at all. This is the magic of Soundtrack: we are given several layers to the sound. Now that we have a nice little process for quickly making a reverse reverb, let's add this process to our AppleScript library so that we can simply select the preset process, rather than set it up every time from scratch.

Go to File > Save as AppleScript...

Name this AppleScript '˜Reversed Reverb'. Note that the AppleScript is automatically going into a folder dedicated to Soundtrack Pro Applescripts. 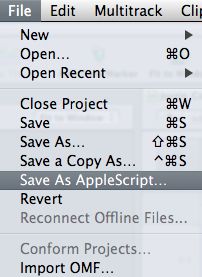 Now you can access this Applescript from your AppleScript Menu in Soundtrack Pro: 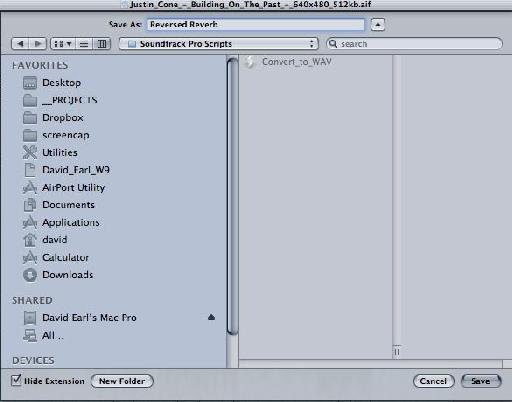 Now save another AppleScript to your desktop, instead of the folder Soundtrack Pro has made for you already. You'll see this icon on your desktop now:

The only caveat is that you need to use PCM audio files. Not OGG, MP3, or any other compressed format. Soundtrack may not recognize them.

David Earl
David writes music for all media including advertising, branding, movies, television, and games. He works for such clients as Sega, LucasArts, Microsoft Game Studios, Landor and Associates, Beyond Pix, Rich Pageant, and Nextel. He also teaches at an Apple Certified training facility in San Francisco called Pyramind and has long been a resource to fellow composers, producers and studio engineers who needed help with their DAWs. A few years back he created a YouTube page that had some of his most popular tips and tricks in Logic where he provided a Logic resource for other aspiring producers, composers, and engineers. This YouTube page quickly became a source of inspiration to help the Logic Studio community at large. With over 22,000 followers on YouTube he decided (and we agreed) that it was time for the "sflogicninja" to partner with macProVideo.com to create longer format, in-depth tutorials. We are excited to welcome David to the mPV team as we continue to create the most and the best Logic tutorials on the planet!
Related Videos
Comments (8)

Dream It. Do It.
Do you want to learn Core Soundtrack Pro 2?
Yes, I want to learn!
No Thanks, I just want to read the article.
Feedback
How are we doing?
We'd love your thoughts, feedback and questions regarding our new site. All feedback is appreciated!
We do not respond to this form! If you need support, please visit our support page.
Thank you for your input!
Your message has been successfully sent
Course Advisor
Don't Know Where To Start?
Ask A Course Advisor